Welcome to the section “Bows”. Here you can see different models of handcrafted medieval bows, which are made according to requirements of modern archers.
Name Price Rating Model

English battle longbow formed the basis of this model of bow. Longbows in the hands of experienced professional archers glorified English army in times of the Hundred Years’ War. First English bow had being made of yew-tree. This tree has such typical features: hard heart and elastic sap. Because of such wood features, not too expensive, but effective weapon could be made. Later, armourers started to glue two layers of different sorts of tree, when making longbows. This method improved efficiency and durability of bows. We use the same method, creating such model of longbow. Two layers of ashwood are enforced with bamboo throughout the length of bow. As bamboo is high-tense woo...

This model of bow is recurve one. Complex Asian bows (medieval bow Hankyu in particular) formed the basis of this bow. Technology of gluing of two different sorts of wood (ashwood and bamboo) was used for crafting of Sanmaiuchi bow. We use the same method, creating our bows. Highest draw weight, good accuracy, reliability and flexibility of bow are main peculiarities of such bow, because of bamboo lay. Bows of this type are more powerful with equal draw weight, comparing to straight bows. Main characteristics: Length: 150 cm Extension: 70-75 cm Draw weight: 17-20 kg Direct flight: 30-40 m Flying range 45°: 130-150 m Arrow string: dacron We recommend ...

Compact recurve horse bow was widespread all over Europe and Asia. Due to not great size and high speed of shot, such bow glorified horse archers. This model of bow is made of double glass pane on the wooden base. Leather dampers are installed on the both bow limbs. Using of modern materials provides with durability of bow. Besides, these bows are light, firm and have perfect draw weight. We recommend to use such bows for mount or dismount archers from 16 years old. Main characteristics: Length: 130 cm Extension: 75-80 cm Draw weight: 17-20 kg Direct flight: 35-45 m Flying range 45°: 90-170 m Arrow string: dacron These types of arrows can be used wit...

This short recurve bow combines the best qualities of few eastern bows: shape of Scythian bow (father of recurve bows); curve of bow limbs is close to late Turkish bows; similar length was typical for Tatarian bows. Bow is compact and easy-to-use. It is made of wood veneer and double glass pane by the modern methods. . Bow limb is active throughout the length. It is typical for modern recurve bows (both, sport and hunter). We recommend to use such bow experienced archers from 16 years old. As archery requires advanced level of skills. Main characteristics: Length: 130 cm Extension: 75-80 cm Draw weight: 16-20 kg Direct flight: 3...

If there are some difficulties with choosing of required model, please write us at [email protected].

You need just open the link of needed bow, add it to cart and make a payment. After that, manager will contact you with specification of order’s details.

Bow is the most ancient type of weapon, which was used from time beyond record. There are many evidences from archaeological excavations around the world. Therefore, it is not possible to define, what nation on what continent has started to use it on the hunting and battle fields first.

This light weapon combines lightness and effectiveness. Ease of creating made a bow affordable for all social classes. Until the XVII century, bow was playing an important role almost in all armies of the world due to its usability, firing speed and range. Even in the XX century, hunters could not get along without it neither in savanna, not in Siberian taiga.

The most known English longbows gained popularity thanks to Robin the Hood and his fellows, who were fighting with heavily armed knights. Length of longbow varied from 170 cm to 220 cm. Firing range was about 120 meters. Experienced shooter could fire up to 20 arrows per minute.

Complex curved bows were in use in Europe mostly. Regular troops of hired mounted archers had appeared in France, Italy and Germany from the XIII century. Their light weapons had curves near of handle and recurved shoulders. Straight bows were big-sized, but recurved bows had larger length of bowstring tension – there was the main difference between these models. Recurve bows allowed fast and point shooting at full tilt.

Bows can be divided on the simple, multilayered and composite models by its construction.

Simple bows are made of one type of material – usually, of wood. Thus, English longbows were being manufactured mainly of Spanish or Italian yew-tree. This type of wood has features of multicomponent structure: firm central part and elastic sap. Due to these features, light weapons had good firing capability. Besides of yew-tree, crafters were making simple bows of ash-tree, elm tree or maple.

Multilayered bows are characterized by improved specifications. It was common to harden shoulders of bow with bone or horn pieces on the medieval East. European or Scandinavian bows were reinforced by gluing of different wood layers. That weapon was more durable and could stand the larger tension of bowstring. 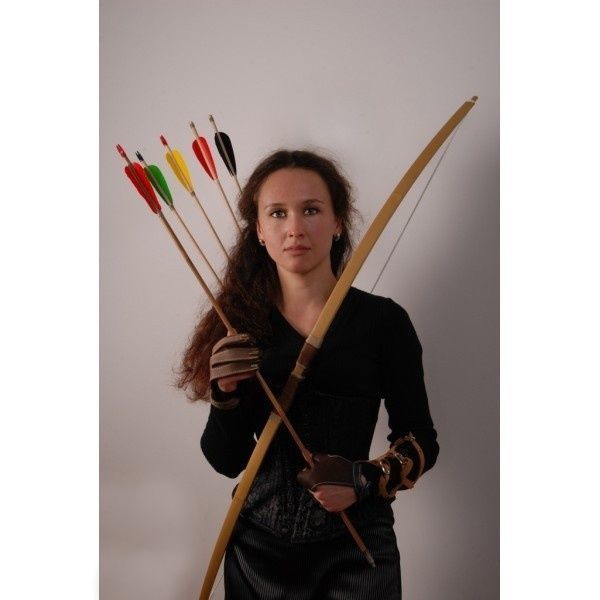 Composite bows were being made of wooden base with venal laps, or with bone pieces. Preferably, nizam used such weapon. At the present days, crafters use carbon fiber composite or glass fiber for bows’ manufacture.