Landsknecht hat with slits Whether landsknecht costume is streaked with cuts, in which crisp white shirt peeps out, then why shouldn’t a hat be like this as well? Here is very interesting landsknecht hat, brims of which look like a round roller, in the cust of which a snow-white fabric of the inner layer is visible. Such hats were well-liked by soldiers of fortune, being posh and comfortable at the same time. Contemporary artists often depicted it in their works, thanks to which you may also show off in the landsknecht clothing.  Hans Schäufelin, 1510 year When you will order such landsknecht hat, don’t forget to choose unique colors combination for your medieval he...

Landsknecht hat with bows In spite of seeming simplicity, this landsknecht hat is one of the most interesting model. Just look at these cute decorative bows of cords on brims, showing it up among others and paradoxically making wearer’s look more severe. Even though bows were quite seldom adornment of landsknecht headwear, but these tiny tots look originally even for it. Unlike most of landsknechts hats, this one has quite small brims and not every soldier of fortune was able to afford to be so decent, whatever strange it may sound. Such hat is a choice of sophisticated fighters with a wise head and hairs, gray with age. *** Urs Graf, 1516 year *** We offer you to order ...

Landsknecht's life was often short. Every effort was made to compensate this with women, wine, bright clothing and the cost of hiring. Clothing of landsknechts struck by the wealth and ornaments.  This landsknecht costume consists of 5 elements: Beret made of 2-color wool fabric with linen lining. Linen undershirt with stand-up collar with button for fastening and sleeves that decorated with frills. Linen doublet with slits and linen lining. Fastening with 6 buttons on the front. Wool coat with puffed sleeves and linen lining. It is knee-length and decorated with contrast trimming.  Woolen pants with linen lining an...

Landsknecht hat with cuts No doubts that landsknechts were wearing the most bright and varicoloured clothing in the Middle Ages. Mot a single fashionista had so party-colored and picturesque dresses, as common German and Swiss hired soldiers did. Legend has it that after landsknechts have destroyed army of the Duke of Burgundy in the 1477 year, their clothing looked like a rags, as it was torn and slashed in the battle. Well, to avoid flashing of naked bodies and underwear, soldiers began to repair clothes right on the spot with help of the locally improvised material – Burgundian standards. When they saw a result, they decided that it looks even better than before a battle. Since t...

Landsknecht hat with feathers Solve a riddle: bright, loud and impudent bird in feathers, but not a parrot. An answer is German landsknecht, owner of not the most elegant, but the most recognizable medieval costume – landsknecht dress. And, landsknecht hat was the most eye-catching part of this outfit – large, flat and decorated with the brightest feather one could get. Well, we decided – why not to gladden our sweet customer with such an exotic thing? We sew flawless hat of showy wool with splendid feathers, the same as soldiers of fortune were wearing together with landsknecht costume on the XVI century. Gravures of the artists are the confirmation. *** Jörg Breu, 15...

Landsknecht hat with brim What the German landsknechts have always been experts in, is fantasy. As there were no two identical landsknecht costumes, so there were no two similar landsknecht hats. Awesome variety of colors and designs, just brighter and more and more. So, this good-looker decided that simple brim is a choice of boring people with no imagination and added another brim with cuts, which looks so festive. Relying on Jörg Breu, such type of decoration was quite popular among soldiers of fortune. However, every landsknecht had a hat dissimilar to others. *** Jörg Breu, 1525-1547 years *** When you will order such landsknecht hat, don’t forget to choose...

Presented model is a variation of early XVI century landsknecht's outfit. It includes the following part: Undershirt has three buttons from the left for fastening and ruffled collar. Short doublet with puffed sleeves is being fastened with six buttons from the front.  Jerkin with lining has a kind of "wings", that visually enlarge the shoulders. There are also buttons from the front. Puffed breeches have lacing on the waistband. Codpiece can be made by your draft. Long chausses with cuts and lining of contrast colour are being tied to the loops on the edge of doublet or to the holes on the braies' waistband. There are additional strings in the set, with what you can fix...

Hat with white or colour feathers is an important part of Landsknecht's outfit. This model is made of wool with linen lining and decorated with two feathers. Hat is tied up under the chin with fabric strap. We make this head-dress according customer's parameters. Please send colours for your hat to [email protected]

Welcome to section “Landsknecht’s costumes”. Here you can see different models of clothing, which was typical for German mercenary soldiers of the XV-XVI centuries.   All clothing is handmade and tailored according individual customer’s measurements and regards. Our costumes are based on the medieval paintings and gravures.

To order one of these wonderful garbs, you need just to add the wished model to cart and make a payment. After that, our manager will contact you to define your size, measures and colour combination.

If you did not find the wished piece of clothing in this section, we can make it individually for you. Just send picture with detailed description to [email protected] Then we will advise you price and discuss details of order.

During the Renaissance, European lands went through the times of feudal disunity. Burgundian wars of the 2nd part of the XV century highlighted the need of integration of new military tactics with usage of professionally trained and equipped infantry forces. Therefore, landsknechts became such force.

These mercenary soldiers came of lower class of Germans. However, after a short time, they became the main striking power of various armies and Europe rulers, and even overtopped Swiss foot troops. There was the greater focus on the courage, flexibility, dexterity at the weapon and harsh discipline. Landsknecht’s salary (good enough, by the way) depended on these factors.

However, these soldiers were best remembered for peculiar clothing. Their garbs had so multicolour style and freakish cut, that became a household name. Distinguished scholar and philosopher Erasmus of Rotterdam said about landsknechts: “There is no brighter bird” and it was quite true.

Fair-sized puffed sleeves, plenty of cuts and slashes on the breeches, pants and doublets, where underwear of contrast colours was visible; combination of two, three and more colours – all these features made soldiers' costumes absolutely unique.

Pants and chausses were also varicoloured. Soldiers attached highly decorated bragueta (or codpiece) to the pants. Such codpiece had been stuffed with straw or har for in order to enhance the effect.

Berets and hats with lining were decorated with ostrich or peacock feathers, bows, lacing or with slashes.

With their outfit, landsknechts were breaking the sumptuary laws, which were regulating apparel of each social class in many European countries. However, in the 1503 year, Holy Roman Emperor Maximilian I allowed them such privilege, as one of the few pleasure in their life “so short and brutish”. Soldiers were vying in bizarrerie and flamboyancy of outfit. Besides, their apparel was some kind of visit card for hirer.  So, it's not surprising, that they were spending almost all earnings just on clothing. 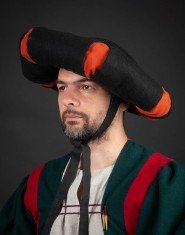 Although I had to wait a while because of the hard work and the delivery 2000 km away, I was pleasantly surprised by the great quality of the hat. I would definitely recoomend this hat. I was able to choose my own colours and it looks perfect!

Perfect outfit and looks really authentic. Fabrics are high quality and fits like a dream. Quite long leadtime, but it is ok for custom made clothing. 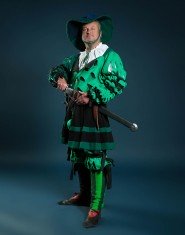 I bought the amazing Costume of Landsknecht and I got not that thing that I expected, it was completely amazing. Materials so soft and pleasant to the touch, I adore it . It fitted me well and the quality, oh it is just yummy . Definitely would order something again.