Like an eastern tunic, these pants are a typical model of eastern tribes wearing starting from the II century a.d. It preserved its original appearance today in some national costumes of such eastern countries as Mongolia, Kazakhstan, etc. The pants can be tied on the calves for more comfortable wearing, as the representatives of tribes did it. Pants are made of natural linen, cotton or wool in different colours. Eastern gambeson and tunic will be perfect additions to the pants.

ARMING BELT FOR CHAUSSES WITH LEATHER PARTS This medieval chausses belt combines all the advantages of a classical arming belt for chausses, but at the same time has additional advantages: It fastens by leather straps with buckles, which allows you to adjust the overall length of the arming girdle belt. Arming chausses are attached not to the hosen belt itself, but to the additional leather pieces with punched holes, which provides a more convenient and reliable fastening for the arming chausses, brigandine or plate leg protection.     Video : https://www.youtube.com/watch?v=Bm0KwqOe5qo A sensible choice for a fighter who wants to be absolutely sure how ...

Short chausses of the XII-XII centuries

Chausses are known from the XI century as main part of men's medieval costume. Etimologycally, the word "chausses" is connected with French verb "chausser", that means "put shoes on" or "to shoe". Usually, men worn long chausses with fastenings on the top, but short chausses were popular as well. In Middle Ages men rolled chausses a la modern stockings to the level of middle calf, and fixed chausses with string. This model are higher the knee and are tied under the knee. Long cotta will be a good addition to these chausses. Base price includes chausses of cotton with cotton lining, but we can make them also of linen or wool. Linen chausses will have linen lining as well as woolen.&...

Wide pants - wide possibilities! Here is very interesting model of medieval style pants for your attention. Starting the VII-VIII centuries, you could see them on the various figurines and stones of Vikings’ epoch. Silver figurine from Uppäkra Barbaricum, Lund University Historical Museum Picture stone from Halla, Broa, Gotland Picture stone from Lärbro, Tängelgårda, Gotland Picture stone from Smiss, Gotland, Swedish History Museum At the first sight, these SCA pants are classic pants of a sea-dog. Wide to the knees and tight at the bottom. Comfortable, functional and almost one-size-fits-all. In such pants, one should rob nearshore...

Pants, a part of fantasy-style costume

Pants with drawstrings on the waist are the part of warrior costume. Rather open cut will provide you with freedom of movements. Coming with shirt and cotta, the pants will create your individual fantasy style character of warrior. You can order it in any colour of different material.

Chausses are known from the XI century as main part of men's costume. Etimologycally, the word "chausses" is connected with French verb "chausser", that means "put shoes on" or "to shoe". In Medieval Ages, tight stocking was being called the chausses, and they were specific both for men and women (chausses had been hidden under the long dress). This model of chausses are being cut on the bias, that allows to make them rather tight on the legs. There are leather string on the top of the chausses, with what you can fasten chausses to the holes in braies or to the fabric belt. Chausses are being worn with braies and cotta. They are a part of soldier's costume. Different fabrics and col...

The item is historically correct model of pants that Danish countrymen had worn in the XIII-IX cc. Pants are wide on the thighs and have drawstrings on the calves. Combined with shirt and cotta, they create a fantasy-world character - dwarf. You can order it in any colour and in the following material: linen, cotton, wool. Boots and axe are not included to the price of the dwarf costume.

This model of men’s chausses with codpiece is typical for Europe of the XV century. It was an mportant part of men's outfit in Burgundia, Italy, England or Germany. Chausses could be single colour, multi-colour, or combined. For example, one leg could be of one colour, and another one - sewn of different colours straps. By contrast with earlier models, these chausses are pretty tight. Codpiece is attached with lacing with brass points. All holes for lacing are sewn round by hand. Chausses are without sole, made of cotton in base, but wool and linen are possinle in options. They can be attached with lacing to the bottom edge of doublet, porpoint, holes in brais, or simply bindin...

Some models of medieval men' chausses had not only one-piece toe, but footstraps as well, that were making chausses hard-wearing and comfortable. This model of chausses was very popular in XII-XV centuries. They are being cut on the bias, that allows to make them rather tight on the legs. There are leather string on the top of the chausses, with what you can fasten chausses to the holes in braies or to the fabric belt. Long cotta will be a perfect addition to the chausses with footstraps. Different fabrics and colours are available for order.

ARMING BELT FOR CHAUSSES Ordinary medieval chausses were fastened to the brais belt. At the same time arming chausses need much more reliable fastening system, that is why arming belt for chausses appear. Strong and simple arming girdle made to securely hold both the arming chausses and brigandine or plate leg protection. Designed especially for fighters it is equally good for SCA, HEMA, LARP end reenactment events, medieval festivals and stage performances. Choose the type of your medieval hose belt manufacturing: machine one or full hand sewing (second one is historically correct and offered for additional costs).  Base price medieval hosen belt includes (as...

This medieval chausses belt with suspenders combines all the advantages of a classical arming belt for chausses, but at the same time has additional advantages: It fastens by leather straps with buckles, which allows you to adjust the overall length of the arming girdle belt Suspenders relieves the weight of products tied to this belt A sensible choice for a fighter who wants to be absolutely sure how his foot protection fastened at SCA, HEMA, LARP end reenactment events, medieval festivals and stage performances. Do not forget to choose the type of your belt manufacturing. What do you prefer - machine or full hand type of sewing (historically correct second one offered for a...

About Medieval pants and chausses

In section “Chausses and pants” you’ll find both models of medieval clothing for legs, and fantasy-style pants. All samples are custom-made according to the historical analogues by individual measures of customer.

You need to follow these steps to order one of the presented article:

If there are some difficulties with choosing, please contact our manager. We’ll help you to specify your size and required model.

Once all options have chosen, you need to add item to the cart and make a payment. After that, manager will contact you with measurement request and specification of order’s details.

If you didn’t find the wished piece of clothing in this section, we can make it individually for you. Just send picture with detailed description to [email protected] Then we will advise you price and discuss details of order.

Chausses – leg clothing, which was worn over the braies, had appeared in Europe approximately in the XII century. It looked like two separate stockings. Both, men and women were wearing them. Though, men chausses suffered more changes during the centuries.

Soft, but strong materials, such as linen or wool were used for sewing. Chausses were being tailored by individual measures and usually were cut on the bias for better stretchability of fabric.

As braies were rather long, it was unnecessary to sew too long chausses. They came up to the knees and were fixed with string or lacing under the knee.

In time, men’s undergarment became shorter, and chausses – longer. So, men were fastening them to the belt or holes on the braies’ waistband. Undergarment, in its turn, were tucked into the chausses.

There were two main models: the one with “rounded” upper edge, and the second one – hoses with “tails”.  The first type had almost straight (or a little curved) edges from the front side.  This curved side was buttoned to the braies, or tied up with string. According to the old codex, such chausses were popular until the XV century, especially among the lower orders.

The second type was “tailed” chausses. They were noted for elongated edges from the back side. “Tails” of these chausses were covering lower back and were fixed to the holes in edges of upper clothing – pourpoint or jerkin. Primarily, such model was a part of noble outfit. And only from the XV century, groundlings and peasants borrowed such model .

Chausses were becoming higher. So, when length reached pelvis, men started to join two parts together. From the XVI century, pant legs were being sewn together from the back side. It is noteworthy, that hoses with separate stockings didn’t lose their popularity and was in use as well.

As a matter of moral compulsion, it was shamelessly to leave braies uncovered. So men were wearing cotta or tunic of thigh length (and even longer, sometimes) to hide this area. 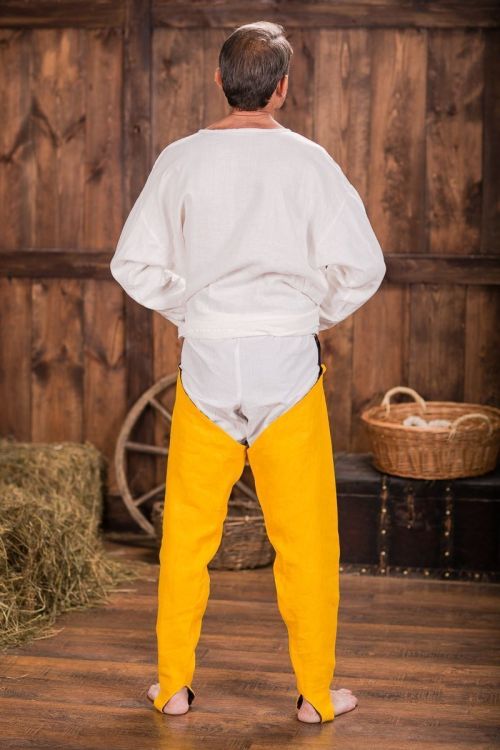 But in time, upper dress became shorter, so young court men often demonstrated bottom, when making a profound bow. So tailors started to sew hoses together for convenience and decencies.

Single-piece hoses were leaving underbelly uncovered. So, codpiece as a part of chausses had appeared. It was piece of cloth, which were sewn to the middle seam. Such part of clothing was not even hidden, but decorated to attract an attention. 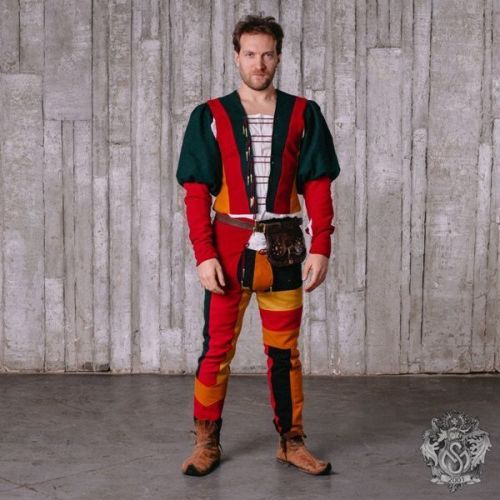 Up to XVI century, one-piece chausses had low waist and were fixated on the hips. Then waist height became higher, that made wearing more comfortable.

Difficult to tie, but looks fabulous. The ties all look and work wonderfully, and the fit is nice.

good quality good fit, but its the little details, such as the endings for the ties that surprised. 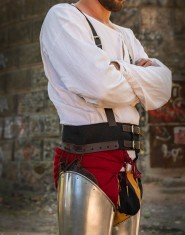 Nicely made and they fitted well over my padding. I didn't have any problem with holding my leg armour up when I used them for training.