Sallet helmet is basic one from mid-XVth century Northern Europe, especially Germany and Hungary, that replaced bascinet. Sallet originated at the very beginning of XVth century in Italy as visor- and aventailless bascinet. To preserve protective properties of helmet at its maximum, sides of this mutant bascinet were moved forward and down covering cheeks and chin while the posterior part was elongated while bent out covering neck. From Italy sallet helmet spread to France, England, as well as the Netherlands and later came to Germany.
Name Price Rating New

Sallet originally has appeared in Italy about the end of the XIV century.  A bit later, this medieval helmet gained widespread popularity all over medieval Europe and especially in Germany. Sallet became a recognizable part of famous full-plate Gothic armor, a piece of art, made of steel. As common soldiers, so noble knights were wearing sallet. Expensive models were highly decorated with brass, etching or chased elements and top figures. Battle sallet was usually completed with plate neck protection – gorget (or bevor). Elongated tail of helmet covered back part of neck. This parade sallet with movable visor is decorated with chased brass wings, forehead plate and br...

Gothic Sallet with visor is a popular model among German knights in the XV century. Medieval helm sallet (salad) appeared in the medieval Italy and completely replaced bascinets. This head protection was high-demanded among as noble warriors, so common infantry and archers. But the most popularity, sallets gained in Germany. Sallet with movable visor became a main element of well-known full-plate Gothic armor. These helmets were often decorated with top figures or chased elements. Helmet is fixed with leather underchin belt and buckle and sewn padded liner makes wearing (and fighting!) very comfortable. This battle helmet is handmade by customer parameters. Main photo shows...

Just look at the cool new sallet we've made for you! This is a copy of a sallet made by the Austrian master-gunsmith Caspar Rieder. The original dates back to 1480 and you can see it in the Metropolitan Museum of Art in New York. Earlier it was in the ancestral armory of the Counts Trapp at Churburg Castle, South Tyrol.                                             The only difference is that Caspar Rieder forged his sallet from a single piece of metal while we welded two parts of the dome together. Both helmets have a medial ridge that smoothly transitions into a low slightly...

German Gothic Sallet Here is an Italian, who immigrated to Germany and gained such a great popularity there, so people started to call him a German. That’s right, sallet has appeared in Italy back in the XIV century. However, by the middle of the XV century it became a German helmet to the last rivet. It was an integral part of German full-plate Gothic armor and was all the rage until the early XVI century. Old faithful bascinet was an ancestor of sallet. Though, it gave life to the dozens of late models of helmets. Foes and haters often call sallet “a steel pot with lumiere”, but such simplification is appalling and deeply flawed. As sallet is quite complicated and interestin...

Helmet Sallet appeared in medieval Italy in the middle of the XV century and gained popularity among knights all over Europe. In distinction from bascinet, sallet provided better visibility. Knights usually wore sallets with visor, but archers and crossbowmen preferred open-faced salads, like this model. Helmet is reliably fixed on the head with leather underchin belt and buckle. Sewn liner makes wearing very comfortable. This made-to-measure Middle Ages helmet is completely handcrafted by our artisans by customer parameters. You can use this functional medieval knight helmet for: SCA HEMA Larp Stage performances Medieval festivals Reenactment events Mai...

Sallet (salad) is a type of semi-spherical medieval helmet, which was in use among knights and infantry starting the middle of the XV century. Design could vary depending on the region of use, though elongated tail was a general feature for all kinds of sallets. Narrow eye slits provide with quite good field of view; metal bevor (gorget) usually completed this head armor. Such battle helms were often decorated with top figures, covered with expensive fabrics. We offer you this custom-made exclusive blued sallet. It is decorated with brass wings and papier-mâché eagle head. However, you may choose another top figure by your wish.   You can use this beautiful medieval helmet...

Knight helmet sallet with decorative brass leaves on the dome is perfect head armor for brave and noble warrior of the XV century. Helmet of this type replaced bascinet in the Middle Ages and became widespread among European soldiers, especially infantry. Sallets could be decorated with brass, expensive fabrics, and top figures. In most cases the sallet worn with beaver (buviger), which protected the lower part of the head and neck. This custom-made medieval sallet with narrow single eye slit on movable visor is a classical parade helmet.  You can use this beautiful medieval helmet for: SCA HEMA Larp Stage performances Medieval festivals Reenactment even...

Italian crossbowman sallet of the 15th-century

Sallet (originally from Italian “celata”) is a group of medieval helmets, which gained popularity among European knights in the late XIV-XVI centuries. Such helmet evolved from bascinet and has main typical feature – elongated tail, protecting the back part of neck. Tail could be either articulated or solid; German salads got quite long tails. Crossbowmen and archers used sallets, which were leaving a face uncovered. This model without visor has single eye slit and decorated with forehead plate. Neckguard is quite short, that is typical for Italian models of medieval sallet.   Helmet is fixed with leather underchin belt and buckle and sewn padded liner makes wearing and figh...

Sallet (or Salad) was a type of medieval war helmet that replaced bascinet in northern Europe during the mid-15th century. Italian sallet with visor is a typical model of that head armor. This helmet protects head and neck, but leaves the chin and lower face unprotected. Therefore, many medieval knights wore an articulated "bevor" (gorget) to complete protection and we recommend to do the same. Our Italian Sallet of the mid-XV century with mobile visor is handcrafted. You can use this functional medieval knight helmet for: SCA HEMA Larp Stage performances Medieval festivals Reenactment events Main photo shows authentic medieval steel helmet with following op...

Sallet (fr. "Salade) is type of medieval helmet that has appeared in Italy and replaced bascinet. Such battle helmet was popular among soldiers, because it was more open and provided wider visibility, than bascinets did. Sallets were widespread among knighthood in the late XIV – early XVI centuries. Knights were usually using salads with small visor; crossbowmen and archers were wearing open-faced helms. Often, highly decorated sallets were used for parades. Sallet gained the most popularity in Germany and become a main element of famous Gothic full-plate armor. This model of German Sallet of the end of XV century has typical prolonged tail, covering the neck. Movable visor w...

Sallet originated at the very beginning of XVth century in Italy as visor- and aventailless bascinet. To preserve protective properties of helmet at its maximum, sides of this mutant bascinet were moved forward and down covering cheeks and chin while the posterior part was elongated while bent out covering neck.

From Italy sallet helmet spread to France, England, as well as the Netherlands and later came to Germany.

To increase face protection, wide plate at the brow of the helmet and deep visors appear, often bellows-typed (with a lot of ventilation holes).

* In mid-XVth century, a specific german sallet was born – round-skulled, long-tailed, often with a few lames. Towards the end of XVth century length of helmet’s tail became more pronounced.

- movable half-visor with a characteristic protrusion under eye-slits in its lower part.

* English-Burgundian sallet evolved in mid XVth in England and the Netherlands. It was usually worn with a bevor and face protection like German sallet. Actually, it looks almost like German one, only more artsy while less tailed. French sallets look exactly the same. Look at Blued winged sallet with eagle head or Visored french sallet with bevor.

* By the end of XVth century helmet fit to skull tighter and tighter, tail almost disappeared and, by the beginning of XVIth century, sallet became almost indistinguishable from closed helmets. By the mid-XVIth century, it was completely supplanted by closed helm and burgonet.

Combination of sallet with Barbute helmets gave rise to burgonet helmets by the end of XVIth century.

Bevors as well as gorgets were an integral part of sallets protecting lower jaw,  throat, and neck.

Mail collar – standard (pizaine) – were also popular among archers due to being cheap, comfortable plus well-protective.

Interesting fact – sallet was a model for German Stahlhelm in World War I, modern combat helmet, and firefighter's helmet.

So, when you, at last, decide to order your personal medieval sallet helmet, be sure – our craftsmen are the best blacksmiths you can choose. They are forging armor for over 15 years, how can you pass this by?

The most metal, the most sparkling, the most armor! Here they are – armors from Steel Mastery.

Choose the one you like or tell us what exclusive you want via email [email protected] We will forge it specially for you according to your sizes and wishes.

Sallet in the Venetian Style, 1460, The Metropolitan Museum of Art 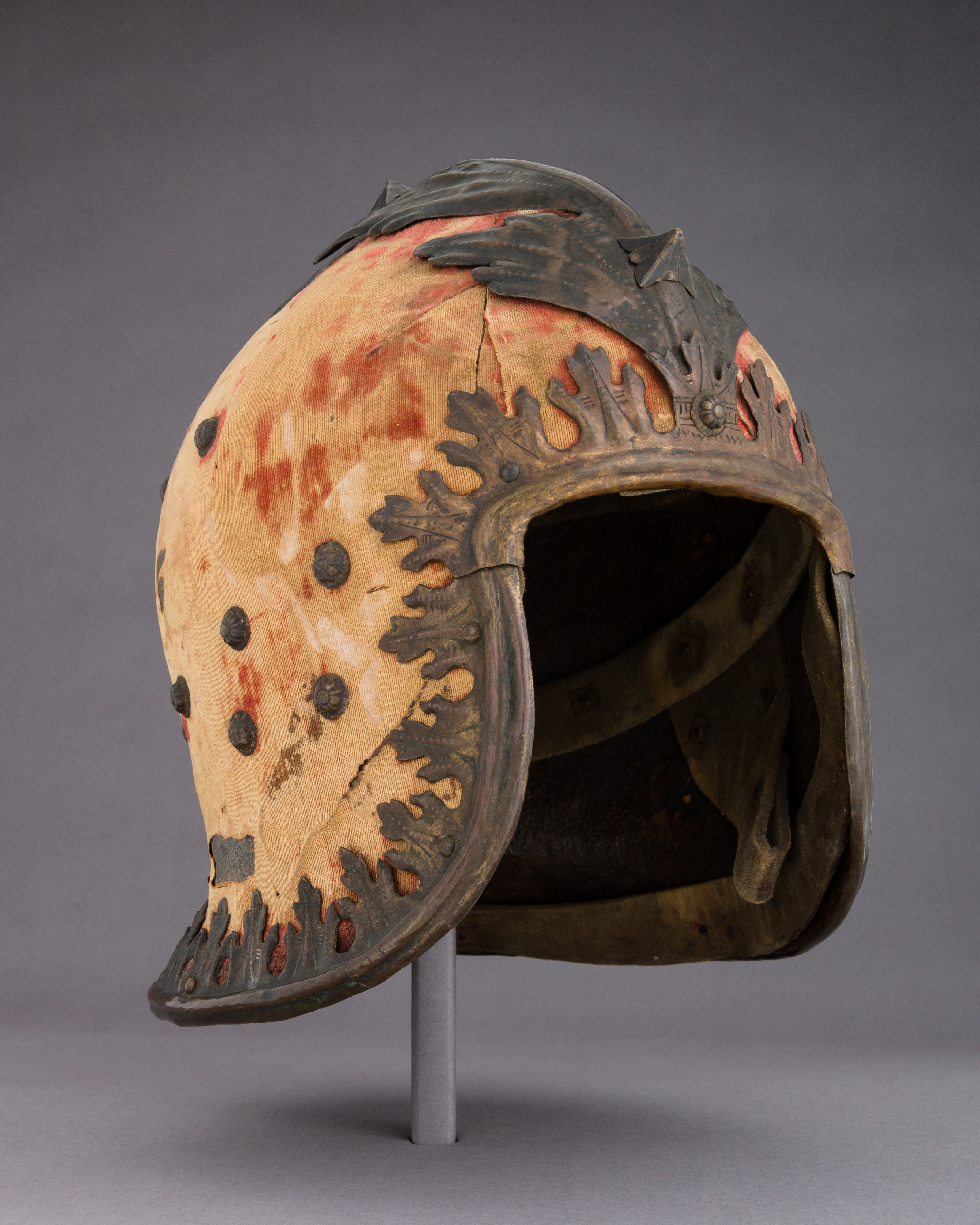 Sallet combination of Emperor Maximilian I, 1495, Neue Burg, Collection of Arms and Armour - transitional to the close helm. 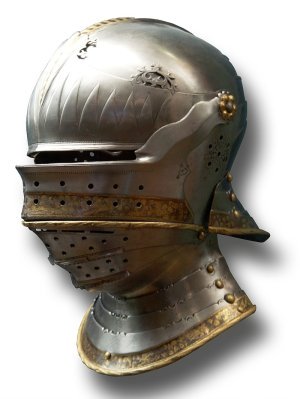 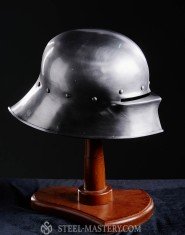 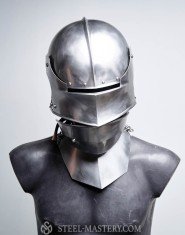 Very pleased with the quality and fit from the measurements that I gave. The packaging was also impressive. The box was beat pretty good from the shipping but the helmet was well insulated.

I gave my measurements and it fitted really well! The quality and craftsmanship of it is amazing! It's also comfortable and light to wear.