If you are looking for cool, reliable and just a beautiful helmet choose Burgundian sallet, mostly known as burgonet helmet. Evolved from sallet it become commonplace throughout XVI-XX century Europe. Yep including the First World War, what makes it one of the best medieval helmets. Main burgonet helmet distinctive features were: - Skull with a large peak projecting above the face, - Keel-like, crest or comb running from front to rear, - Hinged cheeckpieces, - Bevor with drawn-up closed visor. Thus, although the helmet did not cover the whole face as heavy closed-type helmets, it provided quite decent protection. As confirmation just remember – it still used in the time o...

A splendid model of late helmet armet is made of firm cold-rolled steel and is a part of Armor Garniture of George Clifford, Third Earl of Cumberland. Were there better helmets in the XVI century? Probably, yes. More impressive? Never! Dome features two welded halves. Comb of this real knight helmet is hollow inside, made by folding method and decorated with etched ornament. Chin plate of helmet is movable and attached with hinges to the sides of dome. Upper and bottom plates of two-halved visor are attached to the temple parts of dome with single pivot joints. Gorger is also consisted of two plates, as front part, so back one. Pay attention that lower plates of gorget are canted and d...

This model of medieval helmet armet is historical replica of close cavalry helmet of the XV-XVI centuries. Such head armor was widespread all over medieval Europe, especially in Italy. Visor of armet could have various shapes. We represent classical model of tournament closed head protection. It has four pieces, which are typical for knight armet: round dome (or skull)  two cheek-pieces and a visor.  Neck is protected with movable plate gorget (bevor). Visor is fixed with push button, so you may be sure that it will not open during the fight. Narrow eye slits provides with good vision and holes on the visor – with perfect ventilation. The weight of th...

OPEN-FACED LANDSKNEHT BURGONET HELMET Meet the replica of German open-faced burgonet helmet.      Burgonets excel from other helmets with such a dramatic decorative element as comb, which however also serve the practical purpose of strengthening and defending the bowl. Cheek-pieces attached by hinges to the sides of the burgonet's bowl. *** Base price helmet includes following options: Solid hammered dome at photo; Cheeckpieces with hinge mount; Cold-rolled steel 1.5 mm; Steel rivets; Satin polishing; Brown leather straps. *** As an option, you can order solid hammered dome, another type and thickness of metal, color of stra...

ITALIAN ARMET WITH RONDEL, MIDDLE XV CENTURY In front of you is Italian armet - one of the most interesting and versatile middle ages helmet adorning the rich collection of the Metropolitan Museum in New York. This helmet reached us, having lost his visor and rondel in the darkness of the ages, but we recreated them with the visor and rondel of his brother Armet, who also posing in the Metropolitan Museum. This armet is a part of The Avant Armour, one of the oldest near-complete armors in the world. It is dating about 1450-1485, was crafted in Corio workshop, Milano, and was belong to Fon Matsch, the owner of Churburg Castle in 1450 and you can see him in Kelvingrove Art...

Medieval helmet armet takes its origin in XV century, being designed - as presumed - in Italy. It was distinguished by being the first helmet of this time to protect completely the head, compact and light enough to be carried one. Movable hinged cheek pieces and gorget plate opened backward show the face. Eye slits and holes on the visor allow a knight to see and breath freely. There are also holes on the sides on ears’ level. Plate bevor (gorget) protects neck and throat. This made-to-measure Middle Ages helmet is completely handcrafted by our artisans. Note that we can make any other non-standart visor – just let us know via email  [email protected]

Meet this modest and laconic close-helmet incorporating a sallet skull and brow reinforcement with an armet visor. Dating back to 1480, it was found at St Peter's Church, Stourton, Wiltshire and now is exposed at the Royal Armories, Leeds. It is a typical helmet for the late XVth century, widespread in Italy, France, the Low Countries, Spain, and surely – England. Armet completely encloses the head while being compact and light enough to move. Original helmet is a little bit rusted and has lost the front gorget plate for which there are holes in the fold of the dome. But we have corrected those shortcomings by recreating a luxurious, sparkling replica of this museum’s old man. ...

Closed medieval helmet armet was in wide use among European knights in the XV-XVI century. This battle helm provided with complete protection of face as well as neck and throat. In distinction with other models of head armor, armet had not round ventilation holes, but narrow cuts on visor. Visor and gorget (bevor) are movable. Armet has sewn liner that makes wearing more comfortable and reliable during the battle. You can use this functional knight helmet for: SCA HEMA Larp Stage performances Medieval festivals Reenactment events Main photo shows closed helm armet with following options: Cold-rolled steel 1.5 mm; Satin polishing as finish treatment; S...

There are few "armet shticks" to distinguish it from others:

Early medieval armet evolved from bascinet at the turn of XIV-XVth in Italy as Milanese armor component. It still had spheroconical dome, however, it was much rounder than bascinets. From the very beginning its features were: sewn-in cap, tight fit, chin made of two opening halves. Early armet also had second visor that reclined on the back of one’s head (however, there were versions without an upper visor, when halves of lower visor were stretched forward like the Hounskull's). Nonetheless, they still used an aventail as neck protection.

You can see various models in Churburg castle collection.

In the middle of XVth century, classical Italian armet appeared, subsequently becoming popular widely outside Italy. You can recognise it by:

Towards the XV century’s end armet with lower visor appears – forged in solid chin form, fixed on a loop on helmet’s left side while fastened with latch on the right. You can see it in Eugène Emmanuel Viollet-le-Duc works.

Corrugated armor, introduced by Emperor Maximilian I in XVIth century, starts as a synthesis of Gothic and Milanese armors. Surely, corrugated armor needed its own helmet. And got it – Maximilian Armet – popular during first third of XVIth together with accordant armor.

Its dome had corrugation together with low ridge form stiffener.

You can also recognise it by specific visor forms:

- Double visor that appeared during 20s of the XVIth. "Beak" is divided into upper and lower visors, so that upper visor can be folded up – "open the beak" – to improve visibility when lower visor is lowered.

- "Grotesque" – human face or animal muzzle mask as a visor.

- lower visor was not mounted on a hinge but simply fastened in front;

- lower visor just like early or classic armets had.

Gorget could also have few variants:

We can divide XVI century helmets into three directions of Milan armet evolution:

- Battle armets with improved visibility and convenience for battles. Their upper visor covered entire chin thereby providing good overview even without lifting it due to horizontally located viewing slots.

- "Frog-mouth helm" – part of reinforced half-armor for tournament equestrian fights. Such armet was a part of an armor set but intended exclusively for tournaments use – like Stechhelm from The Metropolitan Museum.

Armet remained popular as a tournament helmet till the death of King Henry II in 1559 when  spear’s jab threw king’s visor away and spear piece mortally wounded him in the eye. It was an end of armets’ popularity in tournaments. Besides, on battlefields, they were supplanted by burgonets even earlier.

Yes, armet is one really serious helmet serious fighters should have. So if you choose it, then you should buy it from one serious manufacturer – Steel Mastery ;)

Our blacksmiths with experience of over 15 years will forge the best helmet for you. Additionally to impeccable quality, we offer adequate price and are ready to personalize any model just for you. After all, if Henry VIII could pamper himself with horned-one helmet then why can’t you? ;)

Besides, just look at these cool full plate armors with armets we can offer:

All you need to have one is to place an order on our site using convenient system of options or write to us, if you have special wishes. We are waiting for your orders!

Got my Close Helmet in the mail about a week ago. The Helmet fits perfectly, and the quality is absolutely stunning. I was not expecting it to be so perfect. Ill definitely be recommending this site to everyone I know. My only question, maybe it should be an email is if I could get the the name of the crafter who forged my Helmet as Id like to see other works he does. 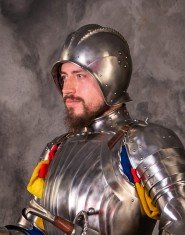 This helmet is just WOW! Craftmanship, size and fitting, material - everything is on the top! Congratulations to artisans! I will order more stuff from you,guys!

This was my first order from Steel Mastery and that helm tops all expectations! I am really impressed with craftmanship and so perfect fitting. Great thumbs up!