Burgundian fashion of the XV century 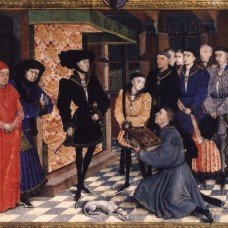 The latest articles were telling about knights and their body protection. Steel Mastery decided to remedy this situation, so today we prepare for you very interesting information about bright Burgundian fashion of the XV century.

In the end of the XIV - early XV century, Burgundy was independent and rather mighty land, which was considered by many european kings. During reign of Philip the Good and his son Charles the Bold, wealth and bizarrerie of palace life style reached its peak. The most posh, extravagant and pompous things had founded a place at burgundian court. This court was considered to be not only the most expensive in Europe, but also a trend-setter.

Elements of gothic style founded its implementation in the costumes of these times. Long, extended silhouettes looked harmoniously  against the pointed roofs and broaches. Such clothes was called “court burgundian fashion”, but more often it was called “fashion carnival”. 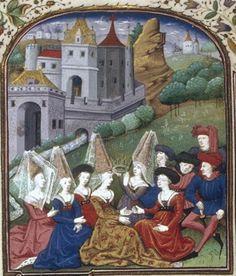 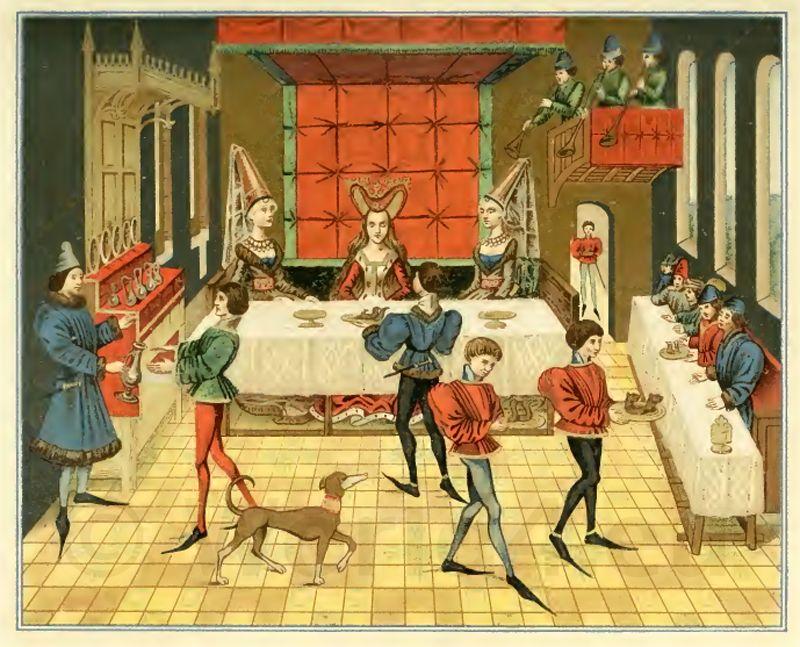 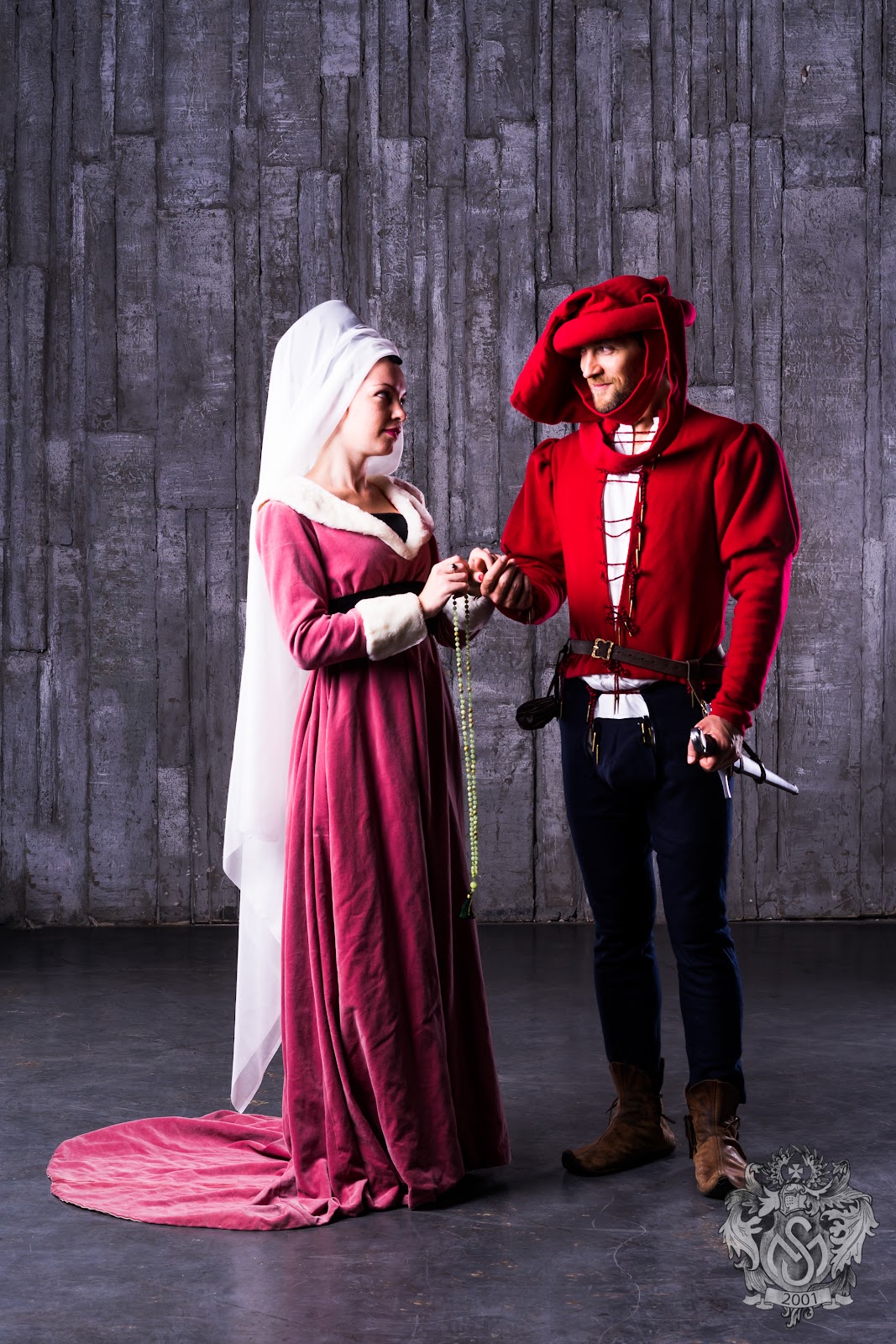 Costumes were called to point out more differences between social classes. Upper classes were to wear not so clothes as common people. Rich and noble people rushed to outweigh each other in cut and decoration of garment. There are few remaining historical chronicles of The Hundred Years’ War’ times, the author of which trusts, that the Lord punished Frenchmen with constant losses of battles just because of absurdity of fashion, that exceeded all measures. Churchmen were also blaming court fashionists and even threatened them with anathema.

Nevertheless, it did not stop court nobility. Clothing had been sewn of the most expensive fabrics, and was decorated with pinwork or golden threads. Silk drapery, fur trim, bows and ribbons were very popular as well. Often, garbs or belts has been garnished with small bells.

Women burgundian outfit was characterized with slim and elongate outlines. Such effect was created due to shortened bodice, and often dress was belted right under the breast, higher than waist level. Skirt of dress was narrow and so long, that the back side has been turned into the train. 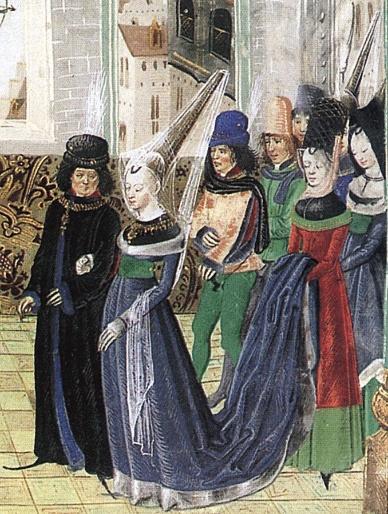 There was told, that trains were brought into fashion by Agnès Sorel, beautiful courtesan. In the XV century, trains of women garbs had become incredible long, besides the length was strictly regulated and conformed the social class of woman. 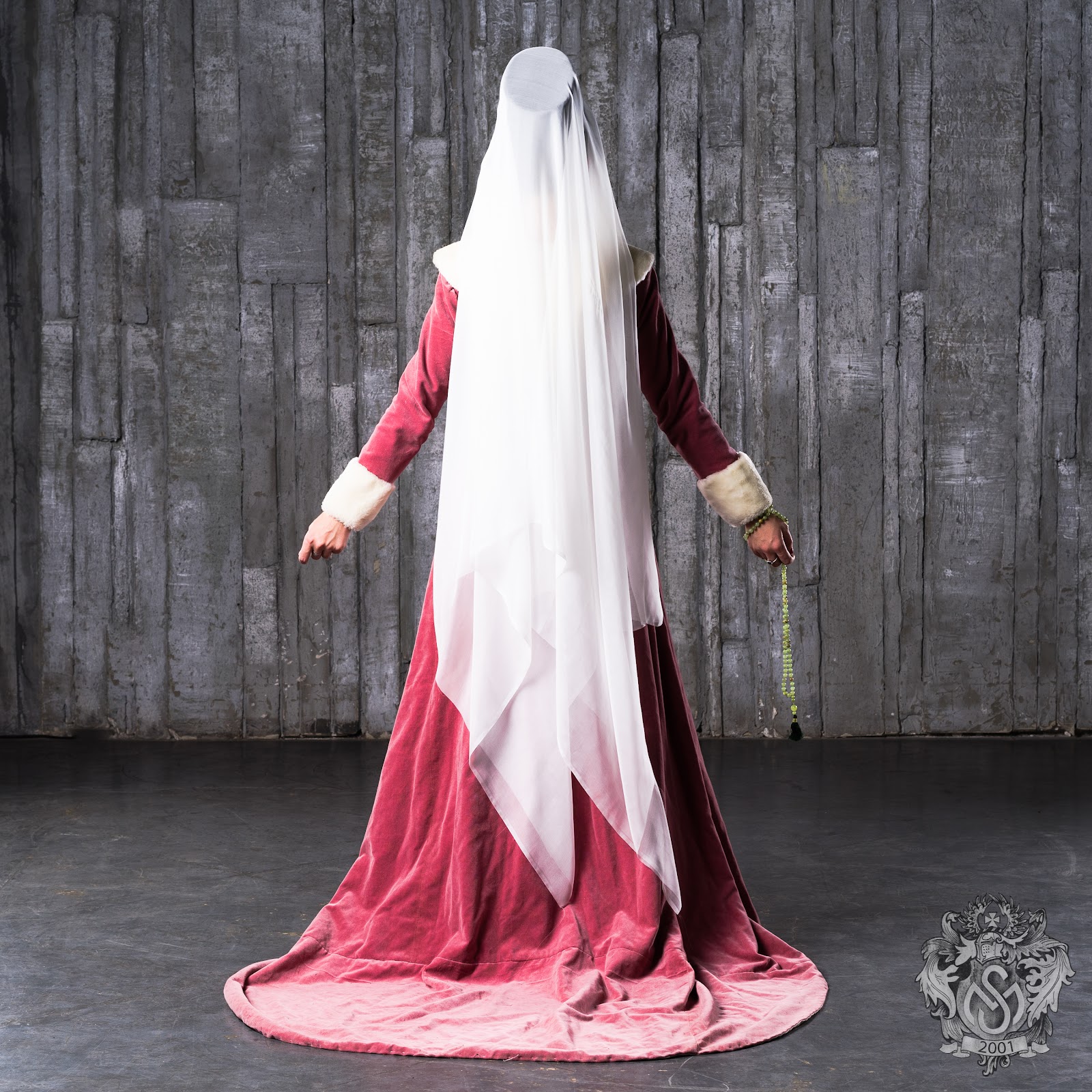 Monks argued against this part of ensemble, calling them “devil tail, which was founded for death of the sons of men”. But despite of it, fashion for such trains was widespread.

Robe, the upper dress, had been worn over the underdress, which was called surcoat. As a rule, surcoat has been sewn of the fabric of contrast colour. Ladies were lifting a dress a little from the front to demonstrate this part of outfit. Some women of fashion worn three dresses at the same time - cotte, surcoat and robe. Often, surcoat had narrow sleeves, which ended with wide flare cuffs.

One more innovation of women fashion was a decolette. More often, it had triangular form and could be both, from the front and from the back side. Neckline was trimmed with velvet, fur or wide roll-collar. Extra low necklines were covered with inserts of another fabric. 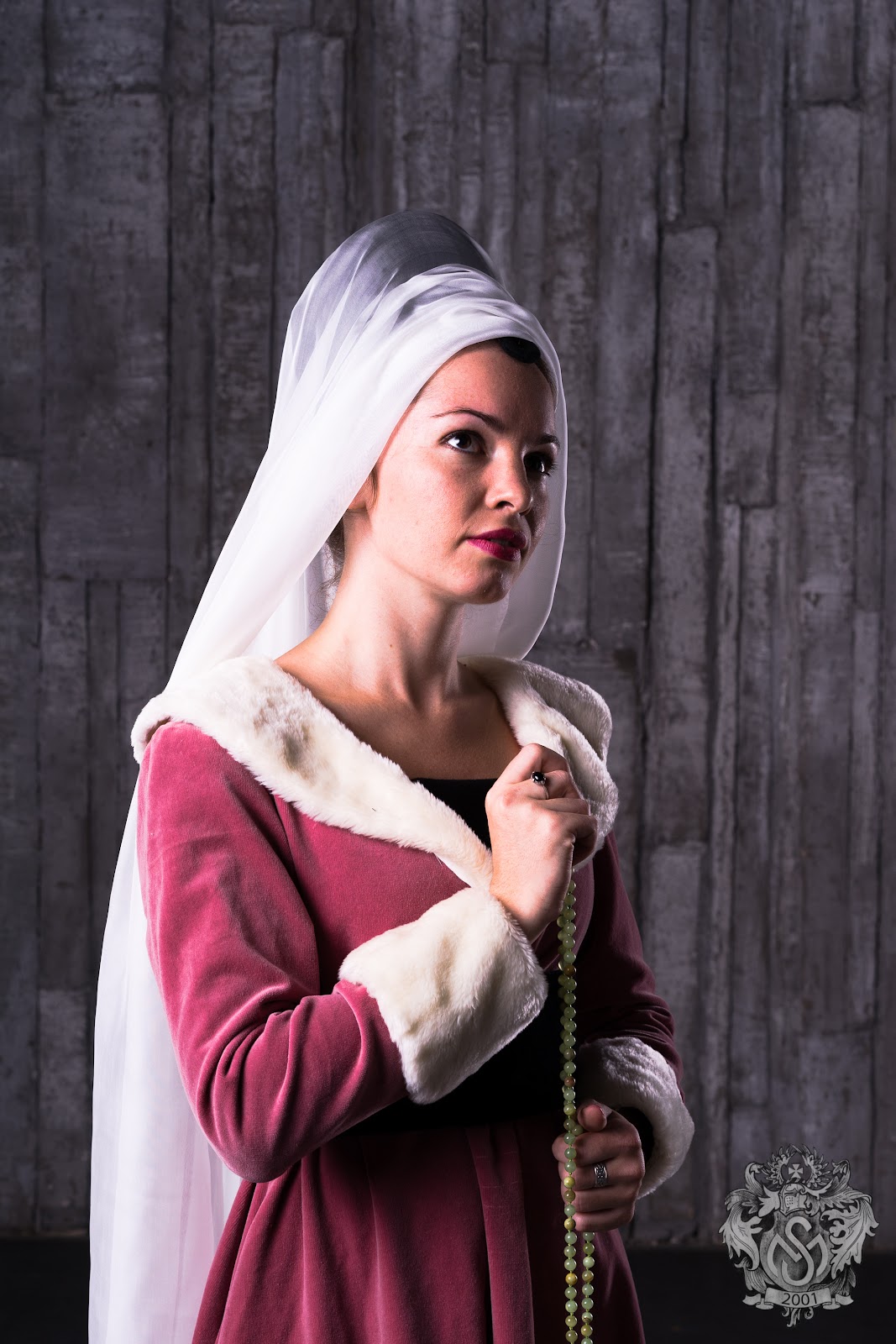 Typical feature of the women burgundian outfit was high headwears.  Sometimes ladies’ caps assumed bizarre forms. For better strength, headwears were made on the frame of whale bones or hard paper. Headwear called hennin had shape of peaked or flattened cone. Hennin had been worn together with light veil.

You can read article about Burgundian headwears here.

As a dress length, height of headwear depended on the social status of woman and was strictly regulated. Not to touch door head with such high headwear, woman had to do knee bends, when entering the room. There are memories of one chevalier about court balls: “Near of such high women headwears, we were as poor small bushes in the oak forest!”.

Great popularity gained a headwear with two horns, which was often draped with thin fabric. And headwears styled as turban was a tribute to Eastern fashion.  Women shave hairs from the front  and on the temples, leaving a little triangle in the centre of forehead. Eyebrows were being plucked. It was considered, that woman looks more innocent and clean in this way. 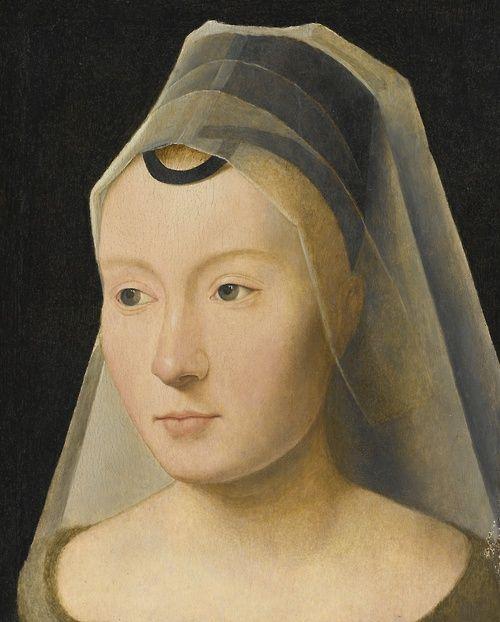 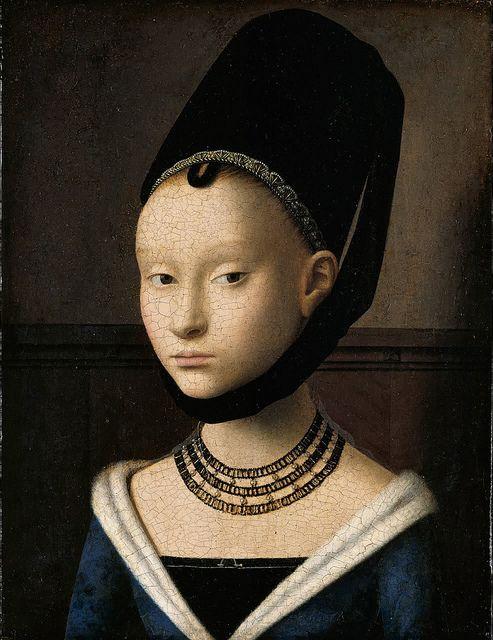 Men costumes of burgundian court was as rich and pretentious as women outfit. Perhaps, the most important changing was shortening of the upper piece of cloth. Long cloth had become some kind of service dress and was worn by medical men, magistrates, scientists and religious clerics. Besides, royal dress remained long one for ceremonial appearances. In other cases, rich men (and especially young) rushed to be in the fashion and wear shortened upper dress. 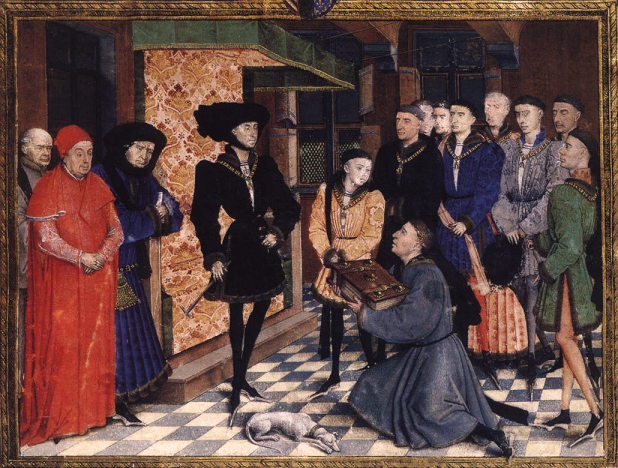 Short jackets came into fashion. Its length allowed covering the hips a little, but sometimes it was waist length. Jacket was very tight on the waist level, and often it has been decorated with a belt, to which pouches, scabbards or gems could be attached. The neckline was V-shaped or with low stand-up collar.

Jacket had specific shape of sleeve, called “gigot”. Such shape has been achieved due to compact fabric roller, which was sewn in the shoulder part, so sleeve looked as volume puff. Closer to the elbow, sleeve was narrower, and sometimes it had a cuffs. 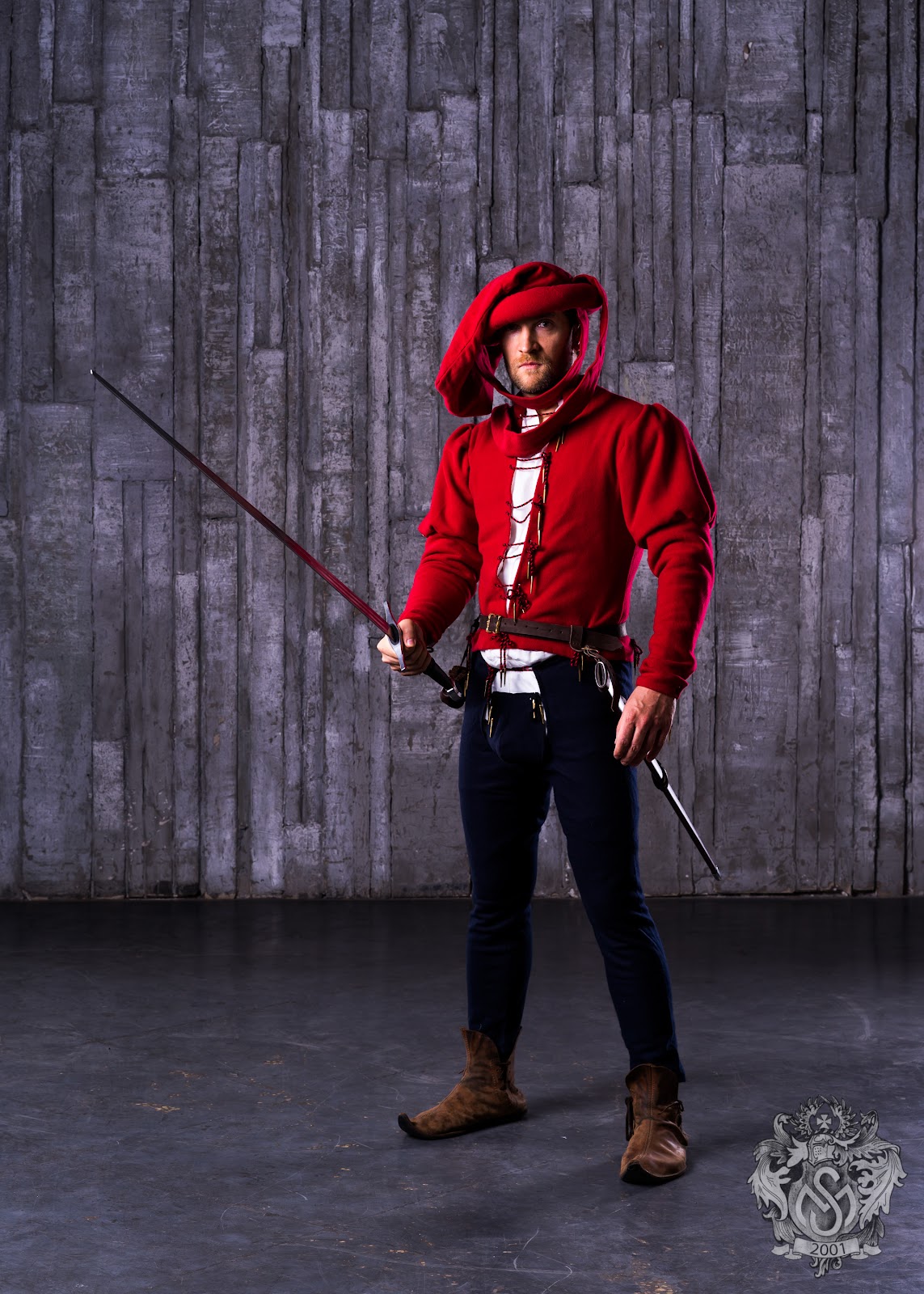 Court dandies were wearing short jackets with cut-outs on the sleeves. They passed the arms through these cut-outs, so sleeves hung down freely, and sometimes even reached the floor. They were decorated with festoons, fur trim or fringe. 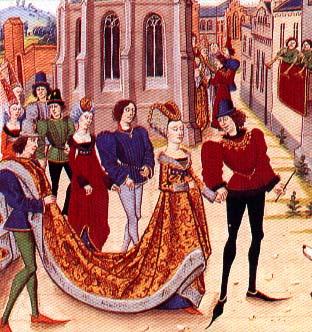 Houppelande was long variant of men upper cloth. It looked as a coat, widen on the bottom and with wide sleeves. Both, nobility and rich citizens were wearing it. Houppelande could have fastenings down to the waist level, but was always opened on the bottom. Some of them had roll-collar, trimmed with fur. Instead of wide pants, narrow and tight hoses, which were cut exactly for leg size, came into fashion. Medium fabric (such as linen or thin woollen cloth) were used for sewing. Sometimes, hoses were fastened to outer garments or to the special belt. Burgundian fashionists cut a dash the pants made of fabrics of different colours. For example, once leg could be of bright red fabric, and another one - plaid or with black and white stripes. Colours of cloth also could correspond to the owner’s emblem.

The most popular men’s headwear was a truncated conical hat and a hood with wide pelerine. Very long end of headdress was often winded around the neck or tied in a knot. 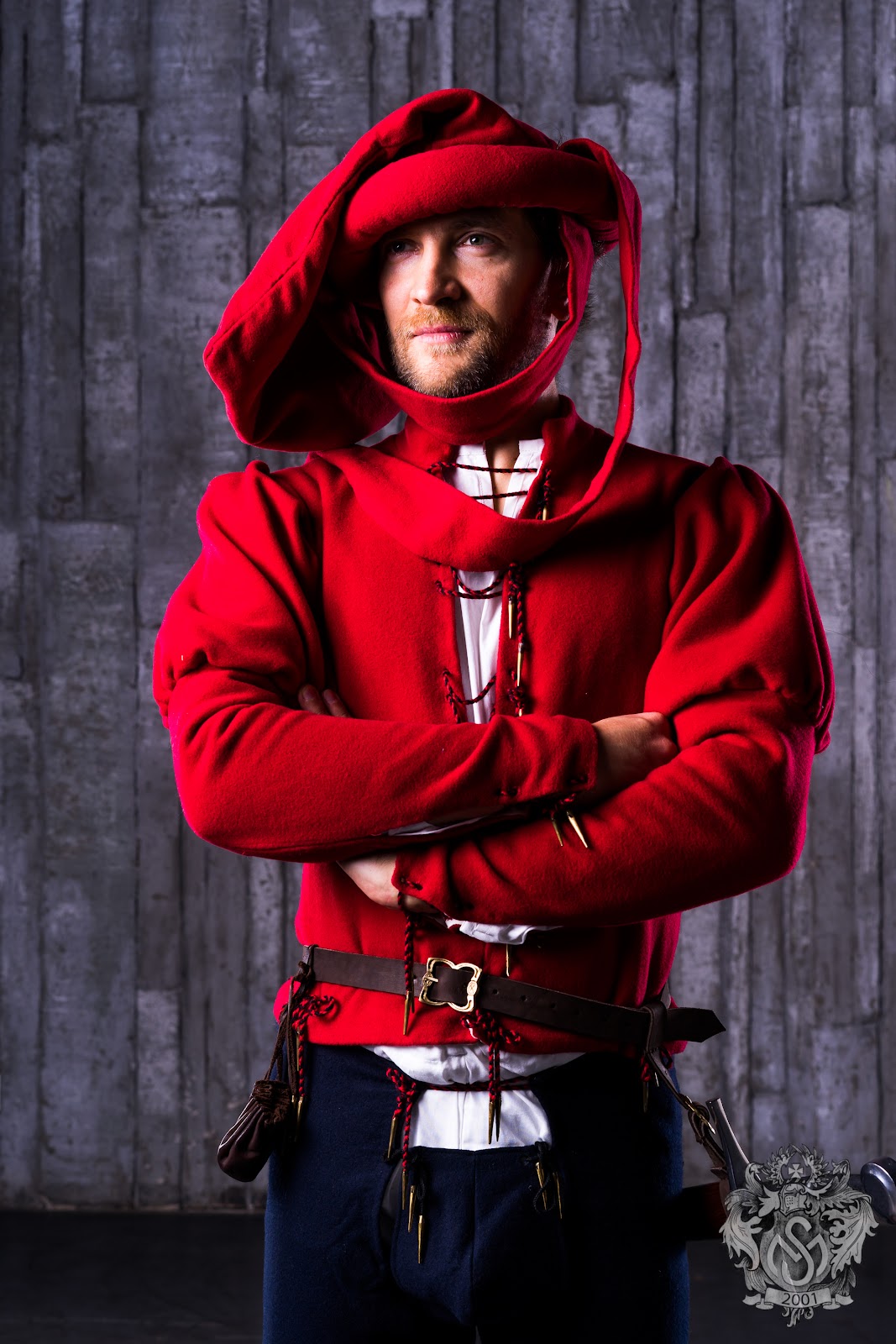 Among nobility, another type of headwear was popular. It called chaperon and resembled a grand turban. Chaperon was made of two pieces of cloth, which were set around the head. Long end, which was called “cornette”, was winded around the neck, so it would not hamper during riding or dancing.

Some chaperons were hung to the side, and sometimes were decorated with wide ribbon, winded around the nead. Such headwears were preferred by Philip the Good. 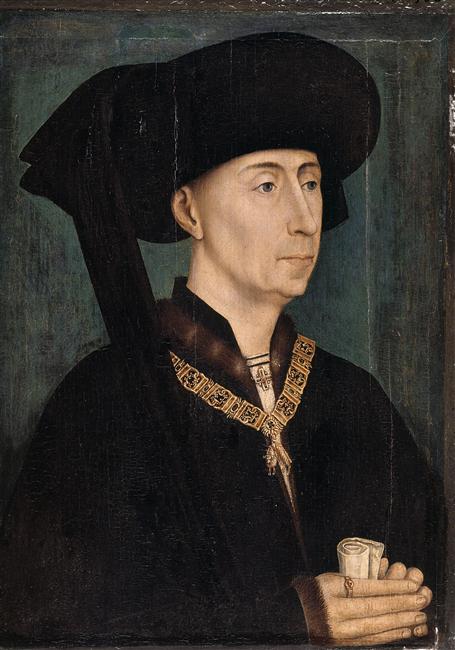 Maybe, pointed boots were the most recognizable element of burgundian fashion of the XV century. The length of toe-cap depended on the status in society and welfare of owner, so everybody tried to outmantle each other. Long pointed toe-caps were recurved upwards, and sometimes for holding, they were fastened with chain the ankle bracelet. Long toe-caps were stuffed with har or horse hair, sole were made of thick leather. 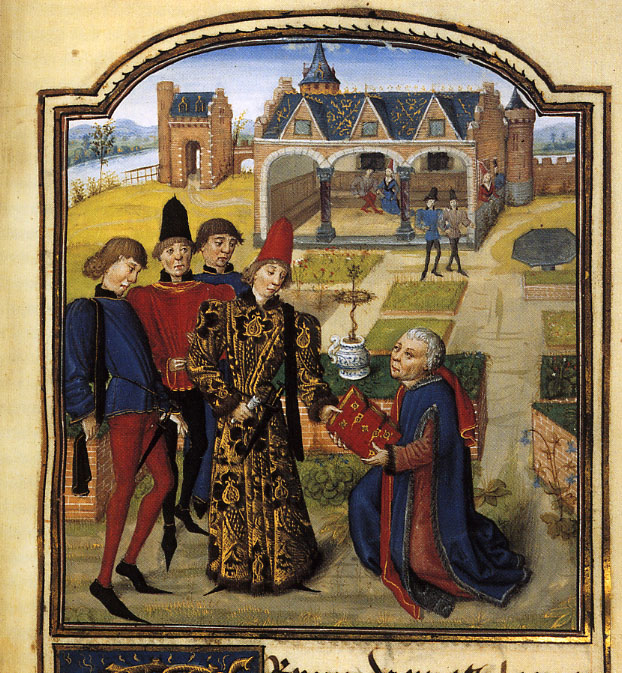 Church called such boots “Devil’s claw, leading to sacred pleasure”. Indeed, it was not possible to bent the knee in the church, but so easy to flirt with ladies, sitting nearby, especially to do it under the table. However, despite of the all possible taboos, fashionists were continuing to wear such uncomfortable shoes, because it considered to be an attribute of rich noble life and elegant taste.

In this section you'll find a lot of various models of different eras - from early-medieval dresses to Renaissance. If none of models are good for you, please send us the photo of the wished model with detailed description at [email protected] and we'll craft it for you.

We used some information and illustrations for this article from: Wolfgang Bruhn and Max Tilke “A Pictorial History of Costume”, Alpine, 1991; Philip Steele  “The Medieval World (A History of Fashion and Costume) “, 2005 Bailey PA Ltd; K. Elgin “The Medieval World (Costume & Fashion Source Books)”, 2009;  Kireeva E. V. The history of costume, 1976; Sidorenko V. “History of styles in art and costume”, 2004 and everpresent web:) Pictures, not belonging to "Steel Mastery", are taken from the web. We do not pretend to be an owner of them and use them as illustrative example only. 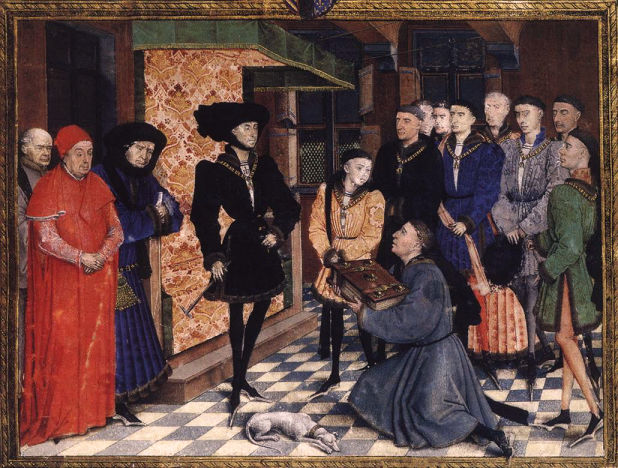