Man's outfit in the XII-XIII centuries 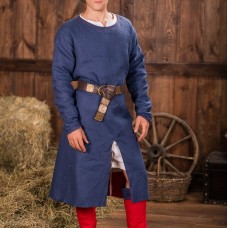 We often receive questions like “What tunic is typical for such century?” or “Are these chausses acceptable for this period?” and so on, and so on… What is meant in this article is typical european man’s costume of the XII-XIII centuries. 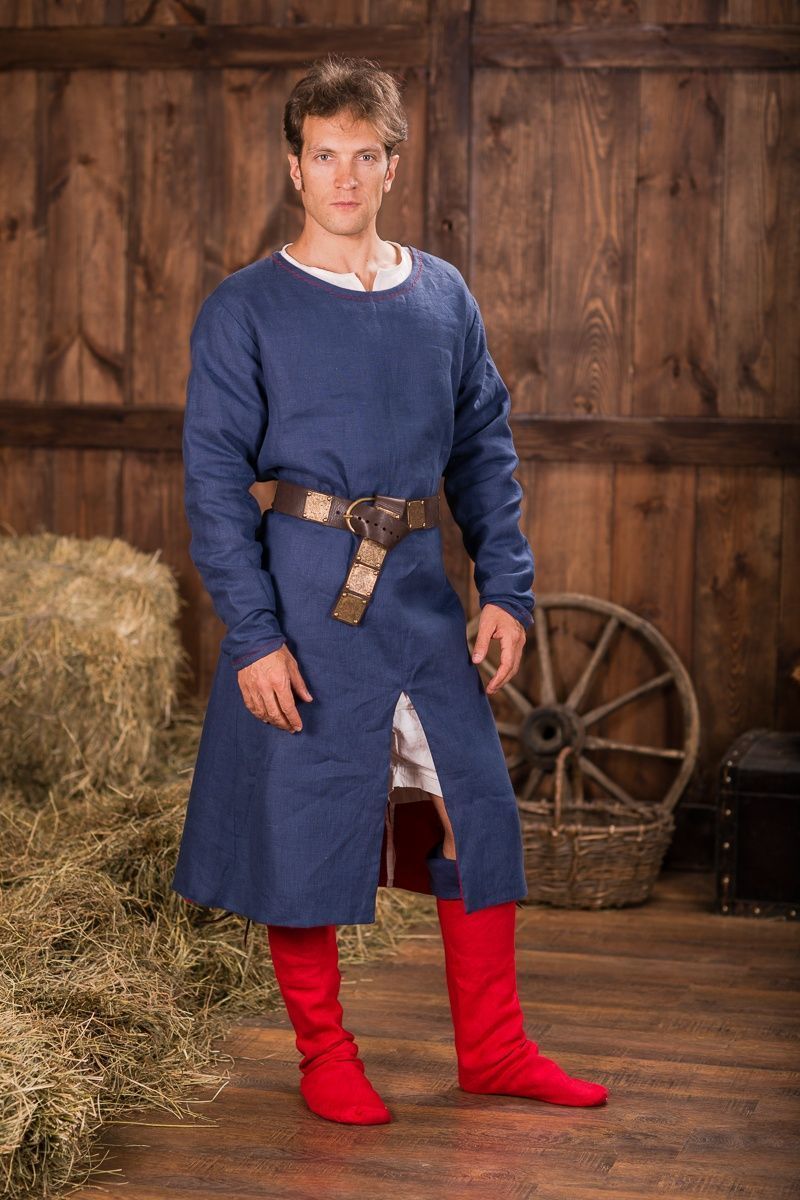 Simple cut and multilayered type were peculiarities of medieval european costume. And as church was a keystone of society, it has been also a kind of “trend-setter”: long and baggy clothes were to hide a body completely.

Cut and models of clothes of all social classes were similar, except of materials: base estate used cheap and hard-wearing linen or warm wool for sewing, but prosperous citizen and noble knights had their dresses made of silk, velvet or atlas, decorated with expensive embroidery, pearls or fur.

Costume of medieval man consisted of such main items as:

-chausses - kind of stockings with fastenings;

Military men were wearing different types of padded gambesons depending on the soldier’s form of activity.

Chemise is a type of underwear, that was being worn over the body under the tunic, and often it covered the braies and chausses. Peasants and  base estate were sewing undershirts of uncoloured twill fabric, but knights and rich lords were wearing thin linen or silk chemises.

Oftentimes, people used saffron and other herbs to odorize and color chemises. From the XIII century, chemises were even embroidered in such a way, that decorations are seen from under the tunic or cotta.

As pants were absolutely barbarian pieces of clothing in those days, for european man it was disgracefully to wear such garment. That’s why people became to use squares of linen to cover the thighs. In time, braies became longer, strings on the legs and on the waistband had appeared as well as holes for chausses’ fastening. 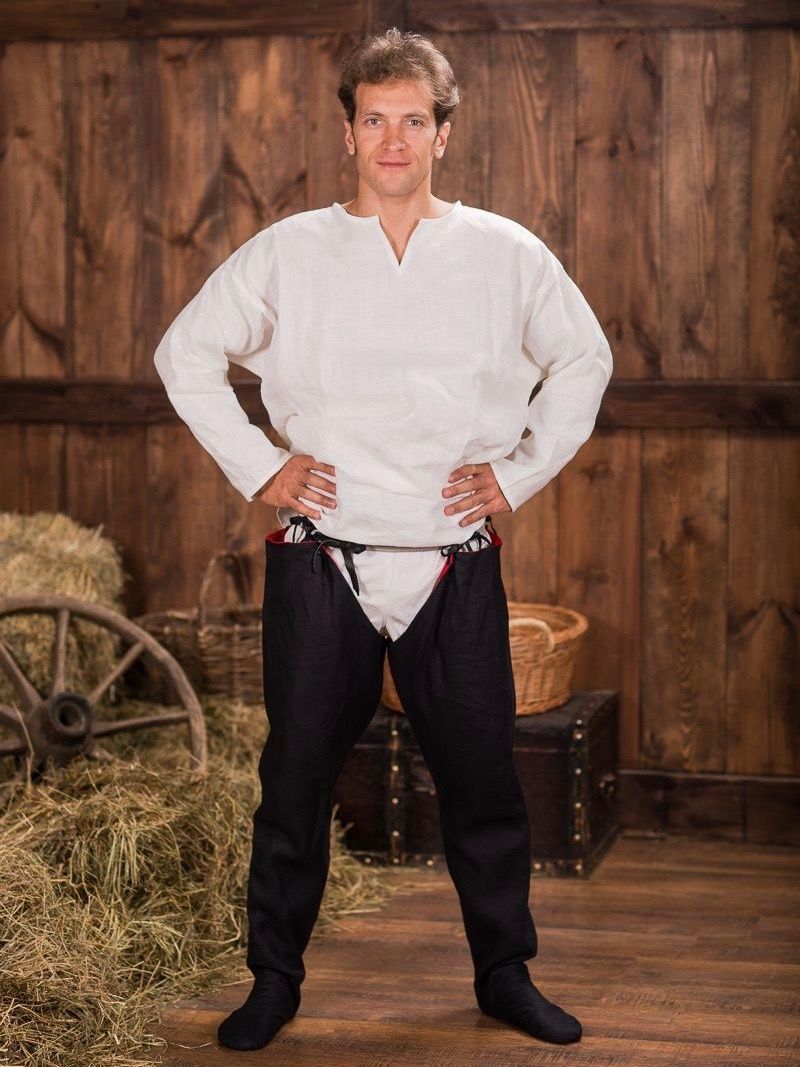 Chausses have being worn separately on each leg and fastened with strings to the wide fabric belt with holes or to the holes in braies. Depending on the purposes and worthiness of costume, quantity of strings could be varied and even decorated with bows.

Wide upper cloth named cotta was being worn over the chemise. Simple cut of cotta was unchanged for centuries: only length, materials and colours could be varied. Cotta’s sleeves were being made narrower to the wrists, often with lacings. Bright red, blue and yellow cottas with length to the calf or to the knee, they were the most popular in the XII-XIII centuries. 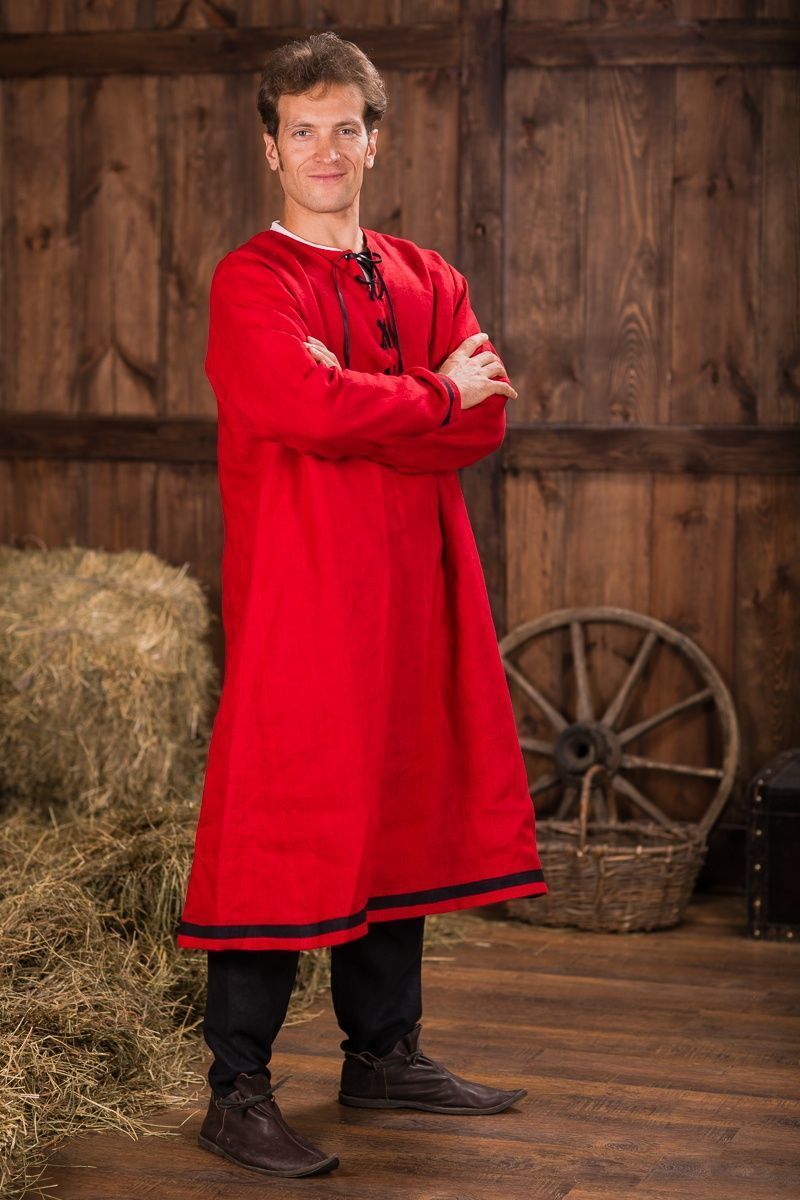 And sure, small headwear - cale - was integral part of men’s medieval costume. It had popularity among both peasants and upper class. It was a cap, usually made of white linen and with hanging strings. Usually, main headwear (chaperon, bonnet, hoods, etc.) were being worn over the cale, but it also could be a separate piece of clothing. Padded cales were used as a liner for helmet.

Each and every soldiers were wearing gambesons, only material, quantity of layers and length of gambesons were different depending on the status and activity. In such a way, soldiers were using short, slim-cut sleeveless gambesons, archers and crossbowmen were fighting is gambesons with length till the mid-thigh.

Padded armour was decorated with festoons on the bottom hem and sleeves, and had fastenings on the collar.

When choosing a costume for medieval event, please do consider social status of character you want to create. As noble knight in work-clothes has the same strange look, as modern business-man wearing cut-offs during the professional meeting:) 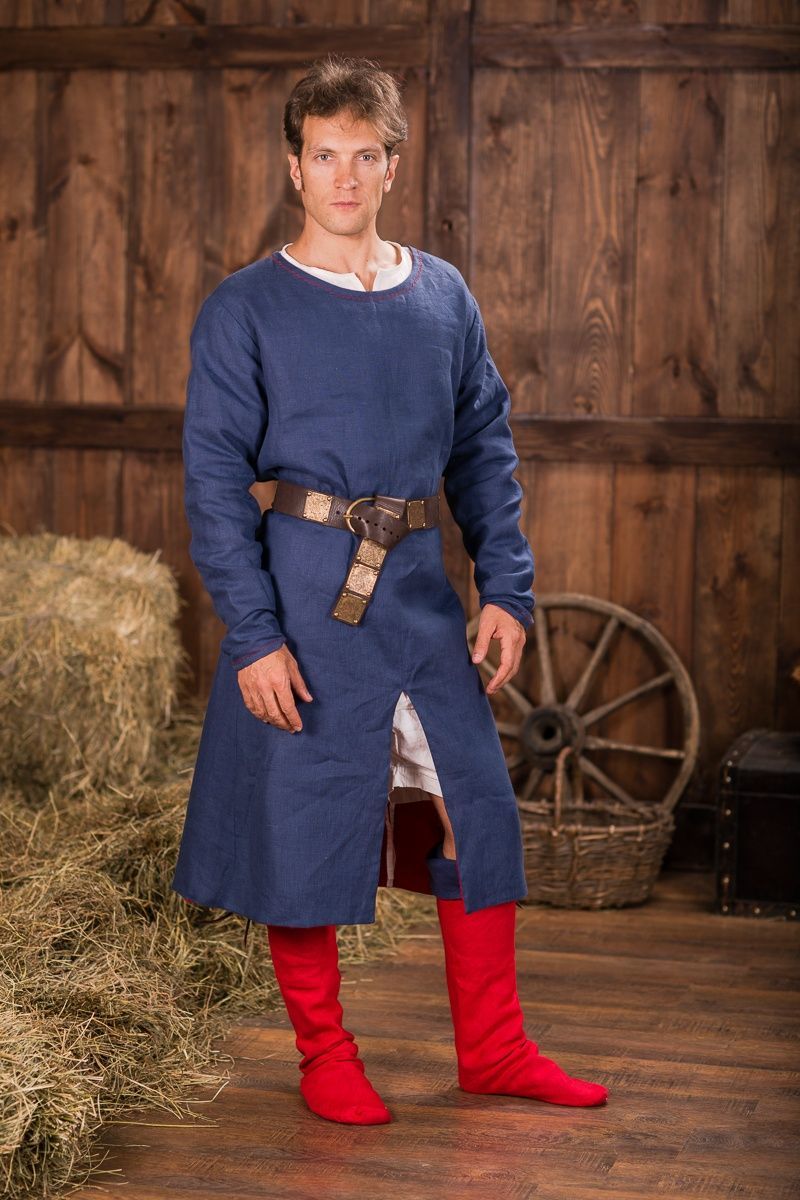