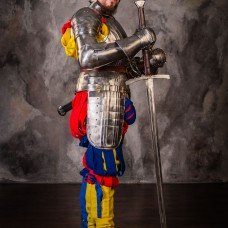 The Burgundian Wars (1474-1477) showed that cavalry is ineffective against well-trained formations of and well-armed infantrymen and underlined the growing importance of Swiss mercenaries. Mercenaries became more and more popular in the European war conflicts. Landsknechts were pikemen and infantrymen who ruled European battlefields from the late fifteenth to the late sixteenth century. They not just fought in almost every military campaign of the XVI century, often they were fighting on both sides of the same battle. They were famous for their skills, such as deploying almost impenetrable 'pike-square' formations with very long (up to 18 feet in length) pikes, an experienced work with a long halberd, or a 6-foot-long double-edged sword known as a zweichender which weighed between 7 and 14 pounds. The Landsknechts may also support and be supported by soldiers using matchlock guns (Arquebuss), crossbow men, and the mounted cavalry.

Just like today - the popular people set the fashion tone for everyone else. And in that period there was no one more popular among the military than the Landsknecht, so their fancy costume fashion influenced their own armor and thus the armour of all of Europe in the XVth and XVIth centuries. Yes, the turn of the fifteenth and sixteenth centuries changes in fashion were reflected in armor - emphasizing massive shapes, more rounded forms and generally heavier outlines, but retaining a distinctive waist and well modeled male legs. 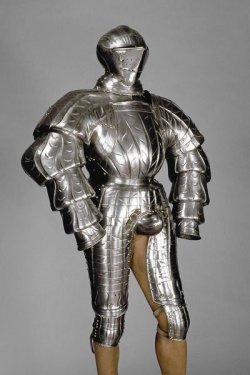 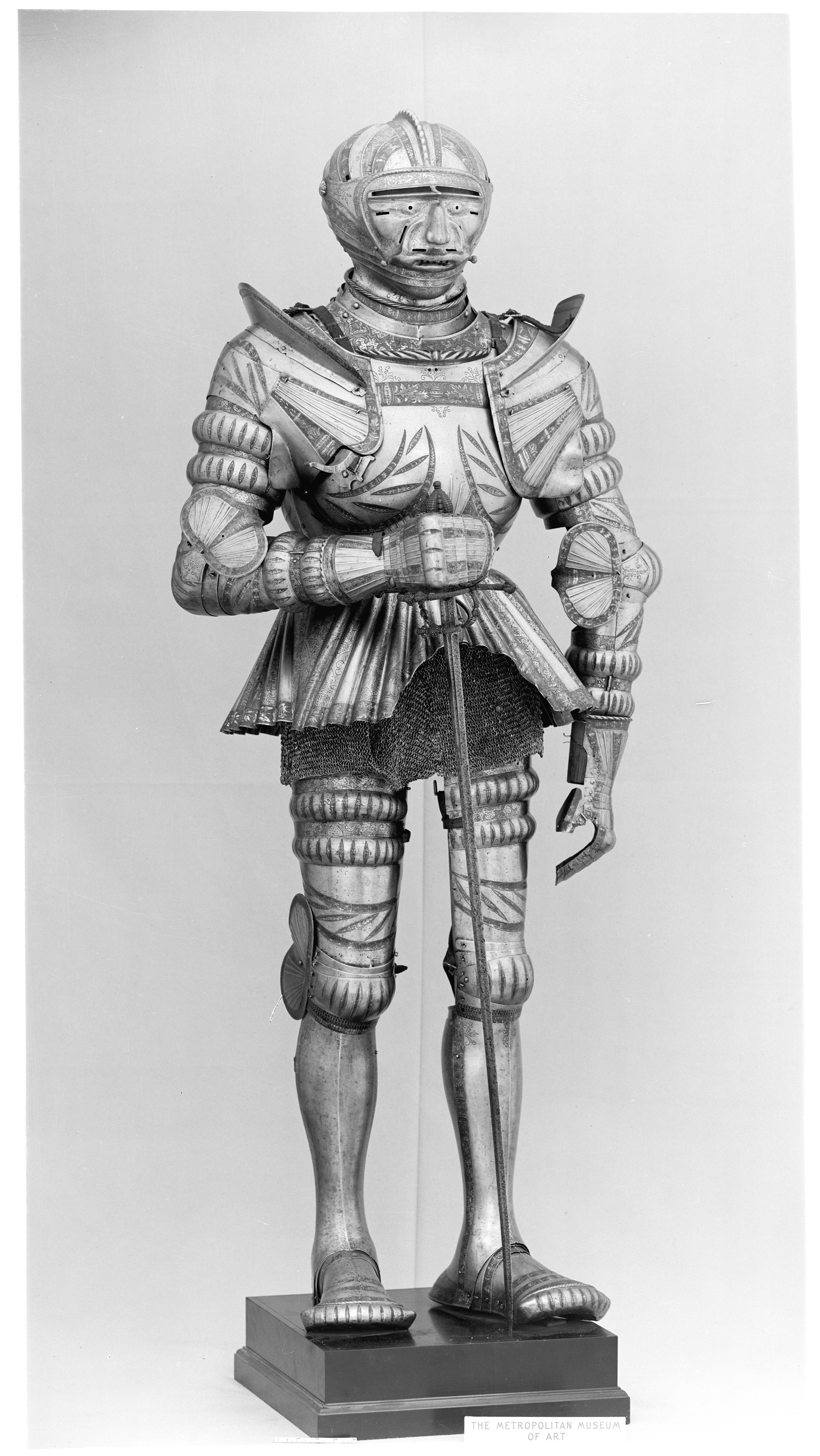 By the way, if you already own a mercenary plate armor but don't have anything to wear under it, don't worry, we have a great variety of Landsknecht's costumes in all sorts of colors and styles. Cool and proper costumes inspired by engravings and so bright and chic they'd make you look good in front of Emperor Maximilian himself. 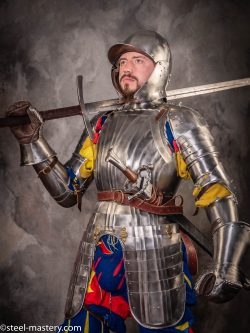 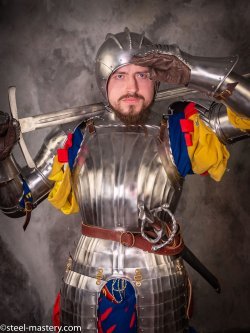 The outlines of the breastplate followed the outlines of civilian fashion. Thus, the decorative ridges and grooves of early Gothic armour had evolved into a more or less parallel pattern known as 'fluting', which could now cover almost the entire surface of most armor elements (usually except for shin guards, shin splints). Also, from the early sixteenth century onwards, at first in addition to decorative crests and grooves, the armor increasingly began to be decorated with etched decoration. As the sharp-nosed shoe was replaced around 1500 by the exact opposite form, so the sabaton kukhmaulshuh also known as bear's paw appeared. Same thing with codpiece. As a rule, it had a thick inner lining and was attached to the armor at the center of the lower edge of the skirt. However, at the same time this also emerged such a curious component of Renaissance armor fashion was the long plated skirt, known as a tonlet.

So the trend of military mercenaries has spawned a new trend in gunsmithing - Landsknecht extravagant, fashionable armor style, known as costume armour. The most prominent master gunsmiths in this field are Wilhelm Freiherr von Roggendorf (1481-1541), Colmann Helmschmid (1471-1532), and Jerzy Herkules Radziwill (1480-1541). 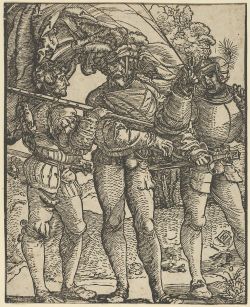 A poor mercenary could only have worn his fancy hat with wide brim, bows and feathers over an iron skull cap (Schaller). The hat thus not only adorned, but also helped to hold in place the only protection this guy had.

A more affluent pikeman could already boast a breastplate with straps crossed at the back, with laminated fauld and tassets. Or just a breastplate and backplate. Very occasionally this landsknecht might wear spiked vambraces which included spaulders, elbows and forearms.

Yes, among and thanks to the Landsknecht, half-armors known as corslets became increasingly common. They consisted of a breastplate and backplate, tassets, simple gauntlets and a light helmet. A cheap version, mass-produced for armies, was known as the Almain rivets, was generally low quality, but cheap. Landsknechts worn corslets with a gorget or Bishop's mantle - a cape of mail, which covered the shoulders and reached nearly to the elbows. Sometimes, two square patches were attached to the edge of the mantle and wrapped around the arms for additional protection. 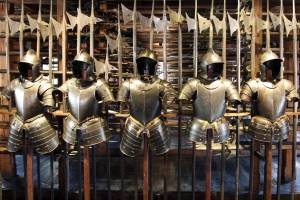 Naturally, we've made you a rich version of the Landsknecht armor kit of the XVI century worthy of a commander of a respectable mercenary squad, not an ordinary beggar. Chic, with decoration, embossed ribs, long tassets and a dapper helmet. 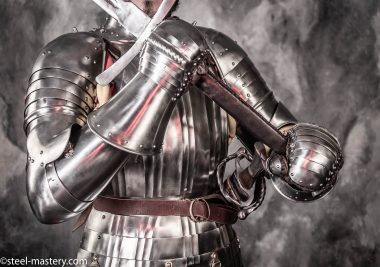 At the early XVI century, armor worn by a pikeman would range from nothing at all to a half-Harnisch. The trend towards increasing the quantity and quality of armor is undeniable - the most naked were simply weeded out through a process of natural selection on the battlefield. The tassets grew longer and covered the legs almost reaching the knee. Also, internal leathers and sliding rivets were a more popular way to attach them than straps and buckles. Small skull cap mostly was replaced by helmets like sallet that covered the back of the neck and had a brim or visor. Those helmets were no less luxurious and eye-catching than a knight's tournament helmets. Of course, as much as a mercenary could afford. Bishop's mantle was still popular, and its shape and design had not changed. 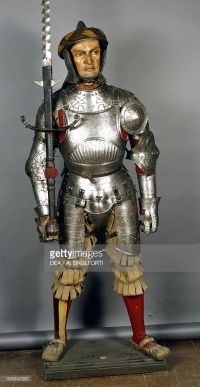 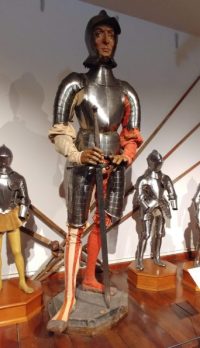 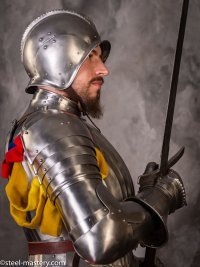 We can also treat you to another cool Landsknecht burgonet helmet with riveted pea, cheeckpieces and bevor, specially designed for this kit. 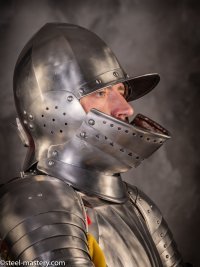 *You remember that Landsknechts are very fashionable fellows, so you can never have too many helmets, don't you?

And even more - we also have a modest but stylish German Gothic Sallet, XV-XVI century if you want to wear something more modest.

To the middle of the XVI century, protection was still an increasing trend. Tassets became longer and longer, down to polyens. Helmets getting more and more closed, up to the burgonet. And  onion shaped were really popular, because the spike can and usually was topped with a decorative ball with plumage coming out of it. 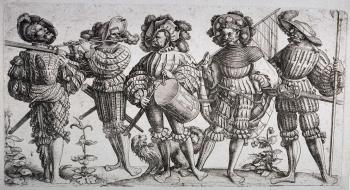 In the middle XVI, the breastplate started to lose the Maximillian fluting and moved to a more globose style with much modest decoration. Also, characteristic pigeon point appear, as well as the curved upper edge of the breastplate.

Mail standard is still popular with the same construction form. As well as plate gorget.

As for hand protection, it still varies from zero to full in wealthy veterans.

By the way, the plate armor protection below the knee has been practically absent among the Landsknechts throughout the whole period of their existence. The instances of its use testify to the extreme success of the combatant.

Interestingly, it was often the case that mercenaries were provided with armor from a town or village armory, or the personal armour of a wealthy feudal lord or state when hiring landsknechts. By the mid-sixteenth century, such armories had become quite common, which made mercenaries somewhat relaxed about owning their own armor. Many were managing with just a mantle, a skull cap and a breastplate. And quite often a Landsknecht could remove the armor of those he had killed after a battle. 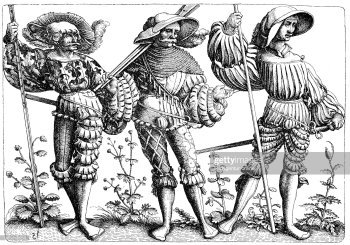 To sum up - the Landsknecht were not only mercenaries, but also sort of rock stars of their era. So both their costume and their armor were not just clothing and protection, but also kind of stage costume at the same time. Trendsetters and just popular guys, they brought a lot to their era that is not a sin to repeat today. 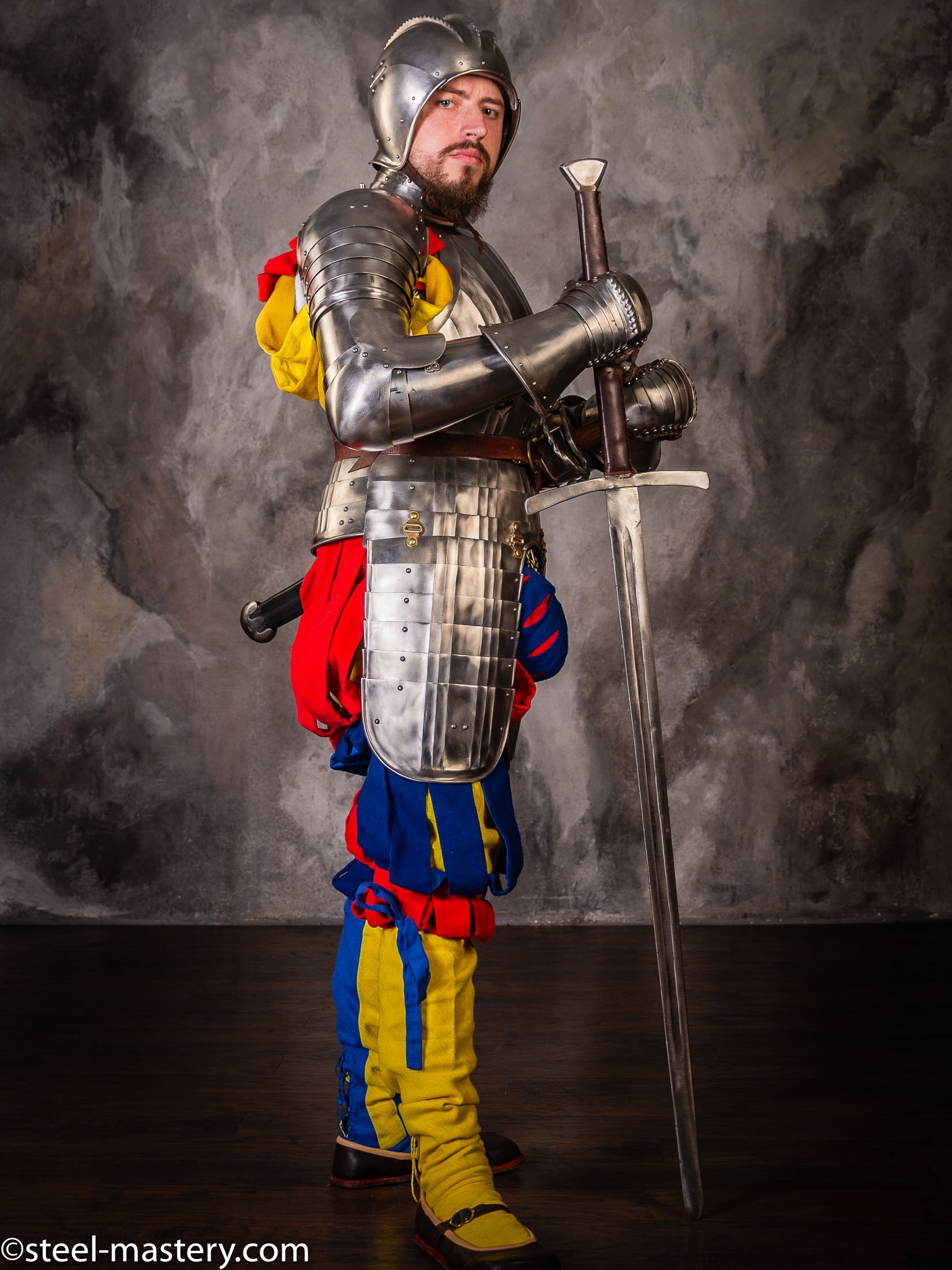