From German words Ritter («knight”) and Aschenputtel («Cinderella”). Asche – «ash” is being changed to “knight” and here we get Ritternputtel.

Once upon a time, in the end of the XV century, there lived quiet and shy sword bearer Ritternputtel on the northwest of Hanseatic League in the renowned town Bremen. He served as the third lower sword bearer, almost a footboy, at the noble old knight. He was quiet, polite and hard-working youngling. He worked for three – for himself and two lazy and mischievous superior sword bearers. He was dressing unmurmuring his seignior in armor; was polishing a sword carefully; was giving heavy tournament spear though hardly, but always on time.

And, Ritternputtel had a dream – to become a knight and win a tournament. But, the dream remained just a dream, as old noble knight was not concerned about him. As he was only junior sword bearer, and above all, he did not have any armor. So, what a knight without armor. So, one day, he splashed suds of beer from the jug of the old knight. Whitebeard was beyond furious and did not take our lad to the tournament. In addition, superior sword bearers stuffed him slaps, because now they had to work on the tournament by themselves. So, all of them got off to the tournament, and sad Ritternputtel was sitting alone at the bottom of Roland’s statue and sighing grievingly.

When suddenly, some dreamlike clank of swords was heard, and there appeared Roland in the flesh, a fierce margrave of Breton March, wearing shining armor, with famous Olifant on one side and sword Durendal in sheath on the other side. He interrogated Ritternputtel loudly – “Why are sadden, servant?!”. Lad told about his dream and sighed grievously again.

Glorified knight smiled condescendingly, dragged Durendal out of the sheath and touched the ground with it. This moment, German Gothic sabatons had appeared on the spot, shining brighter than thousand splendid suns and severe as Fierce Roland himself. An, the knight ordered to Ritternputtel to wear sabatons immediately.

As soon as German Gothic sabatons got on the feet of Rittenputtel, they shined even brighter, and lad’s body had covered with drop-dead gorgeous armor. Roland laughed with bellow of laughter and there appeared war-horde in front of them. Rittenputtel leaped into the saddle, caught in fly tournament spear out of nowhere, broke into a gallop to the tournament, defeated everybody there, so Maximillian I by itself touched his shoulder with a sword and conferred him knighthood.

So, here is sabatons, exactly like Roland’s gift to young Ritternputtel. They sparkle with steel brighter than thousand suns and they are severe as the fierce Roland. Sabatons are hammered out of the best steel, riveted with steel rivets and fastened with firm belt of the best leather. Not the worse, than Maximillian’s.

By your regards, we can make them shining as a mirror, stain polished or blued, with figured rivets and decorative strips, with belts of any color.

It is an honour for every self-respected knight to wear such sabatons. Don’t wait for a tournament and order them right now. Gallop in fight with thought of the Fierce Roland, to the glory of Charles the Great and German Gothic Sabatons. 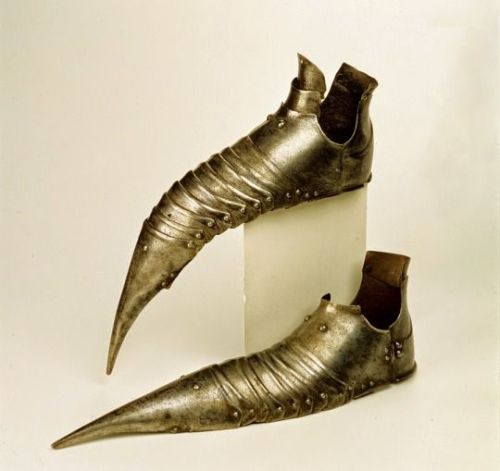 You can use this functional metal footwear for:

In options, you may choose another type and thickness of metal, color of belts, finish treatment and decoration for your medieval knight foot protection.

Benefits, which you’ll get, if you buy medieval plate armor at Steel Mastery:

In section “Metal leg protection”, you can see all models that we offer for ordering. If you didn’t find any for your taste and wish, please send us photo and description of the required model and we will make it for you.

Good for any types of fights (HEMA, SCA, etc.), LARP or stage fights. Diameter of head is 8 mm, diameter of pin is 3.2 mm. There is a stylization of medieval rivet. Leather disk is installed under the head of nail.

Good for any types of fights (HEMA, SCA, etc.), LARP or stage fights. Diameter of head is 6-8 mm; diameter of pin is 3.2-4.2 mm. There is a stylization of medieval gilded rivet.

blueing (for cold-rolled steel only)

blueing (for cold-rolled steel only)

The hammering is available for normal steel and cold-rolled steel. IT IS NOT AVAILABLE for titanium and stainless steel.

Milan-style plate legs with kneecaps are an essential elements of the well-known "Avant Armour", dated by the 1450-1485 years.  This full-plate set was crafted in Corio workshop, Milano, and was belong to fon Matsch, the owner of Churburg Castle in 1445. Now this armour is in almost perfect condition and is shown in Kelvingrove Art Gallery and Museum, Glazgo, Scotland. These handcrafted cuisses with segmental kneecaps (also known as poleyns) guarantee perfect protection and freedom of movement at the same time. Hinged thigh armor is comfortable on wearing and using. On the top, cuisses have leather loops with holes for fastening of armor to the belt or medieval doublet. We offer to complete your Milanese knight body armor with the same style cuirass and arm defense. You can use this authentic armor for: SCA HEMA Larp Stage performances Medieval festivals Reenactment events Base price includes following options: Cold-rolled steel 1.0 mm; Satin polishing; Black leather belts; Steel nicke..

After long day in tight poulaines, it is real happiness to change them to soft and warm woolen shoes with linen lining in your tent. These shoes will wrap your feet as two small blankets. Besides, wearing these “house-shoes”, you will comfortably stay in “medieval look” even on the most demanding festival, as this model is perfect for Europe of the IX-XIV centuries. And besides, it is so nice to warm feet during cold winter evenings in such shoes.    By the way, you may order soft woolen shoes of any color, matching your outfit. ..

Just have a look at these legs. Have you ever seen something more beautiful? Of course, no! As there is plates legs from Armor Garniture of George Clifford, Third Earl of Cumberland – the most modern medieval armor of Greenwich workshop in the XV century. Whole thigh protection lapses in knee cap, which is extended with transitional plates. Next – two-leaved greaves, back half and edges of the front one reach the ground. First plate of sabatons is movable and fixed with hinge joint. This plate is inserted under the brim of archlike cutout for foot in the front half of greave. For all-in-one fixation, these plate legs are completed with firm belts. Sabatons are consisted of six plates each and have not wide and non pointed noses. All details are attached to each other with articulated joints that make wearing, walking and even running very comfortable. Metal of plate legs and sabatons are covered with floral patterns of grape wines and Tudor roses, like Greenwich Armour masters of Tudor epoch were making on their works. Howeve..

When a knight has almost assembled his full real medieval armor, which will protect in mounted and dismounted battle, only one small detail for completed protection is left – sabatons. These medieval armor boots are forgotten quite often, and it’s a loss. As a fighter’s feet may be plainly injured even in the hardest plate body armor. That’s it, a famous knight could lose the fight so simply and absurdly, if he forgets to wear sabatons. Total length is 29 cm ( 11 inch) Fit to size   42 - 43 Cold-rolled steel 1.5 mm Satin polishing as finish treatment; Steel rivets; Steel buckles; Brown leather. ..

Please login to save custom
Buy €380