Visors of bascinet: from primitive to grotesque 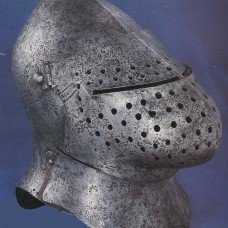 In our previous article, we told you about such medieval helmet as bascinet. Probably, the most uniqueness of these helmets, is a great variety of visors! And today we'd like to show you, how different these visors could be!

Primitive face protection on bascinet helmet had appeared circa 30 years of the XIV century, when this type of helmet won respect of the west-european top military. 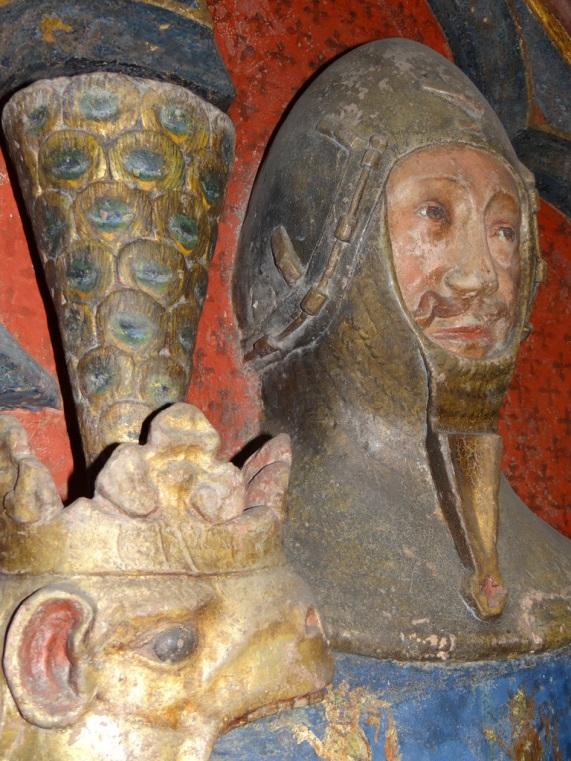 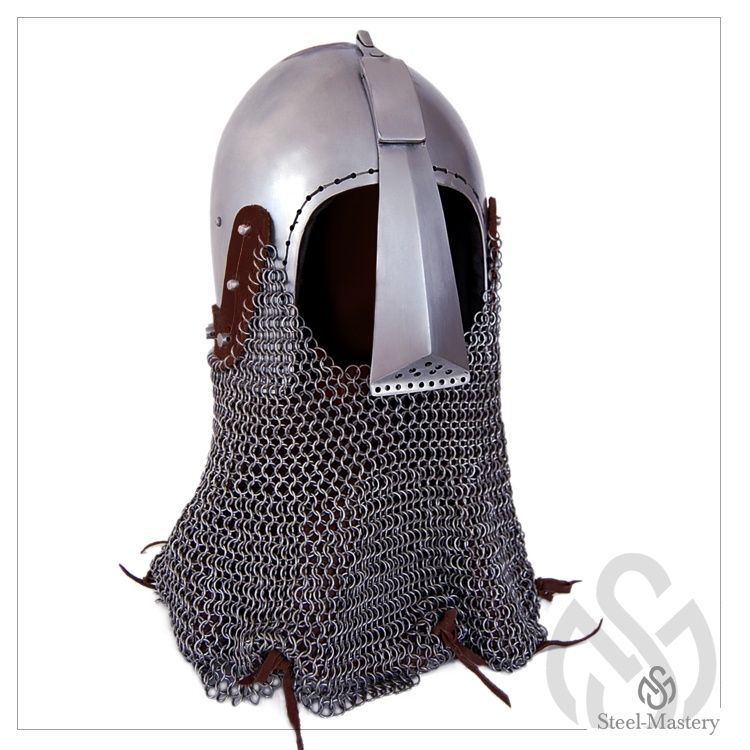 Despite of the ease of manufacturing and way of fixation, metal nasal plate did not provide with reliable protection of face, as eyes were left unprotected. Direct hit of arrow or enemy’s spear led to fatal consequences. For that reasons, in the 1340 years the more progressive face protection began to take off. It had shape of elliptic metal plate and completely covering warrior’s face. Such plates had narrow lumiere and perforation for comfortable breath. 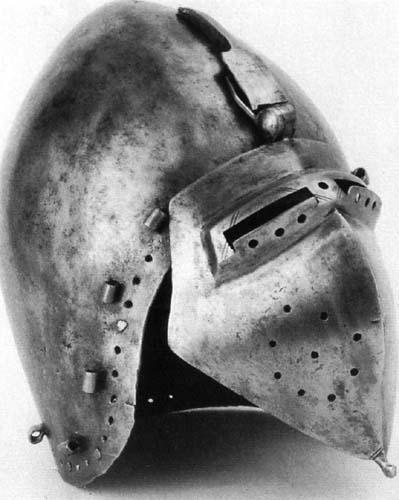 Similar example of face protection is kept in Valeria museum (Sitten, Switzerland). Visor of this bascinet is hung with vertical hinge pivot. Such type of visor attachment is called klappvisor (german “klappvisier”: klapp - clack, clap, visier - visor). It’s worth to remark, that klappvisor could be attached not only on the forehead part, but also on the sides of helmet. Therefore, klappvisors can be divided according to the fixation facilities. 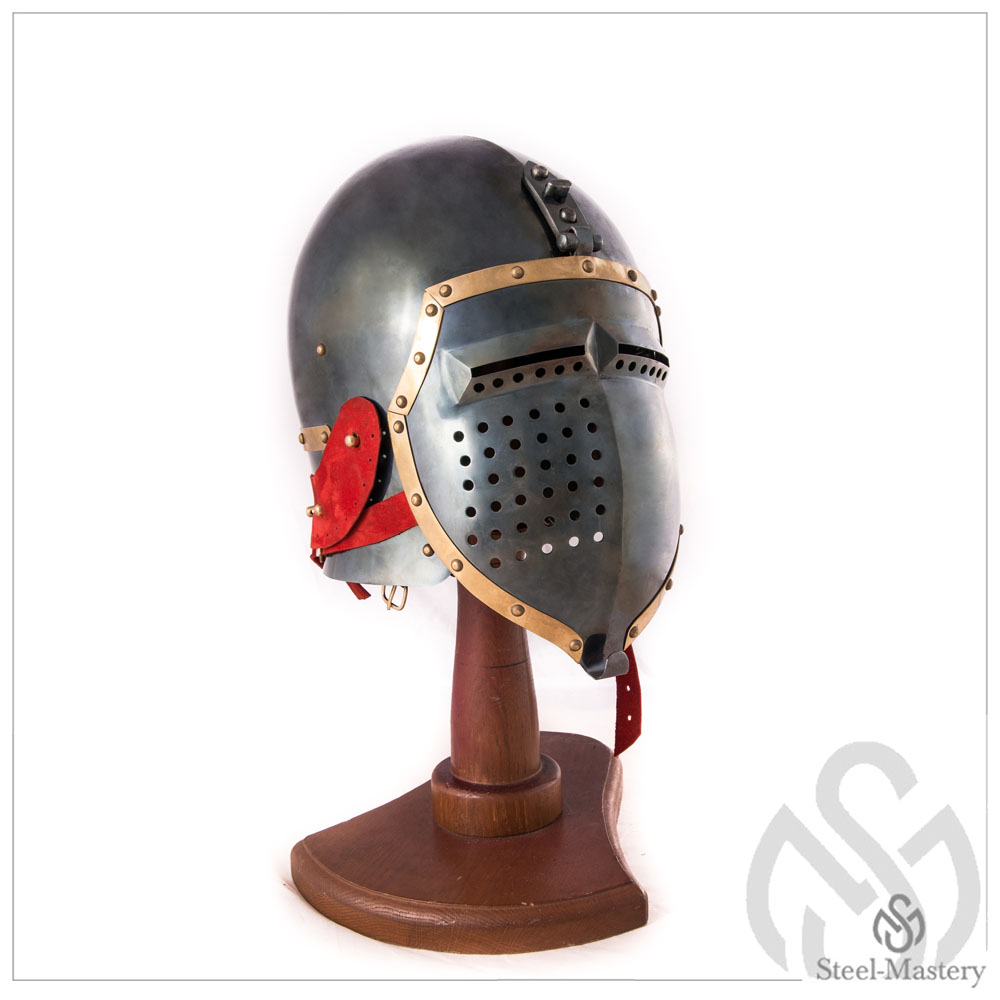 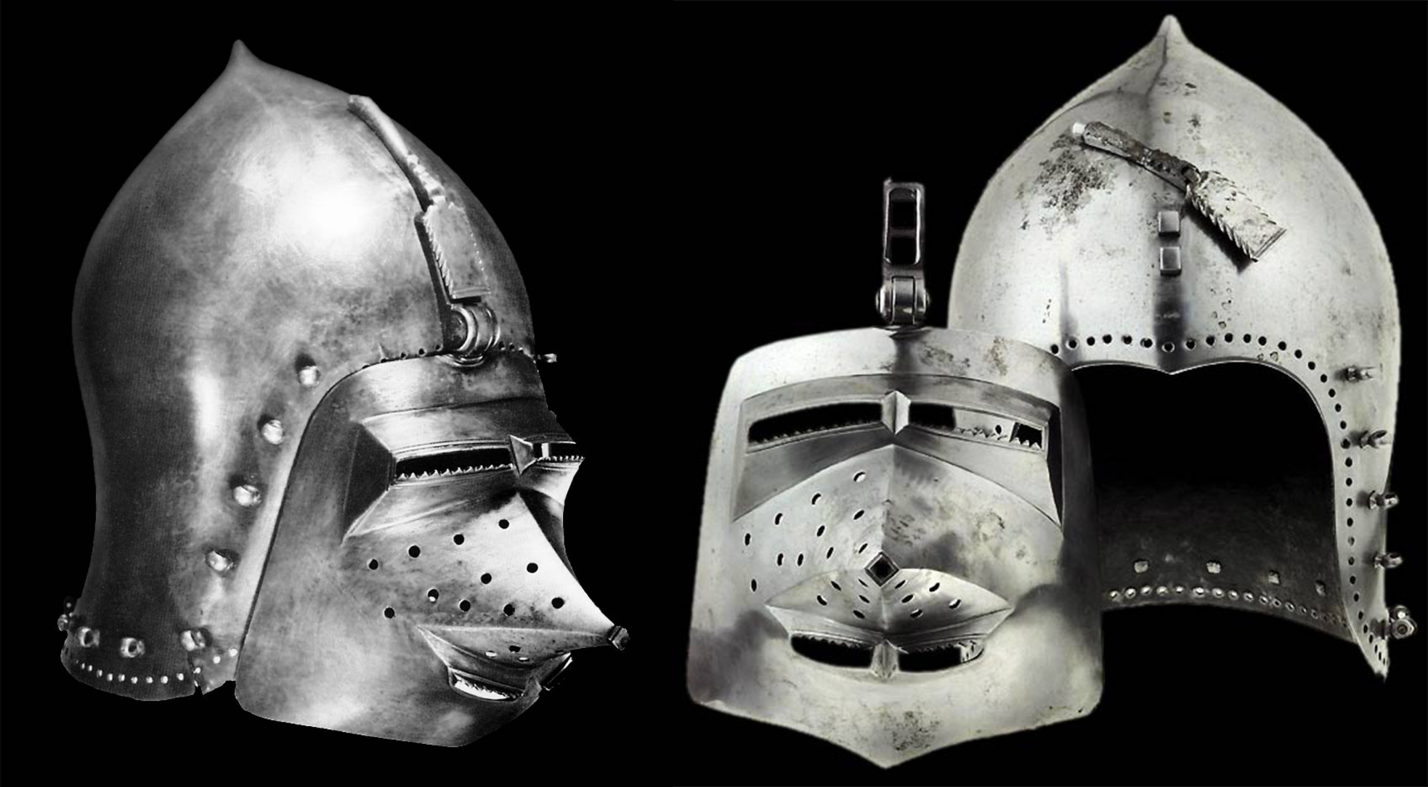 So, hinged klappvisor was immovable on the sides, but owner had a possibility to remove a visor fom pins, raising it up. The second type of fixation - lifting and falling - was held in place by side pivot pin. Such visor was moving around a circle. This type of attachment didn’t allow fast visor removing, but on the other hand it couldn’t accidentally flew off of the enemy’s hit. Hinged visores on bascinets were actively used up to beginning of the XV century.

In the second part of the XIV century, attaching system of visor had being developed. So, for better robustness, visor was attached with side hinges, what allowed lifting and putting the visor down handier, than klappvisor. Often, side hinges were made in such a manner, so visor could be removed. However, there were also bascinets with fixed visor.

At the peak of bascinets' popularity, specific extended visor had appeared. Such visor looked like a dog's muzzle, that's why Germans began to call it Hounskull (German Hundsgugel – literally, “dog's hood”, what can be interpreted as muzzle). This shape of visor allowed free breathing to owner. 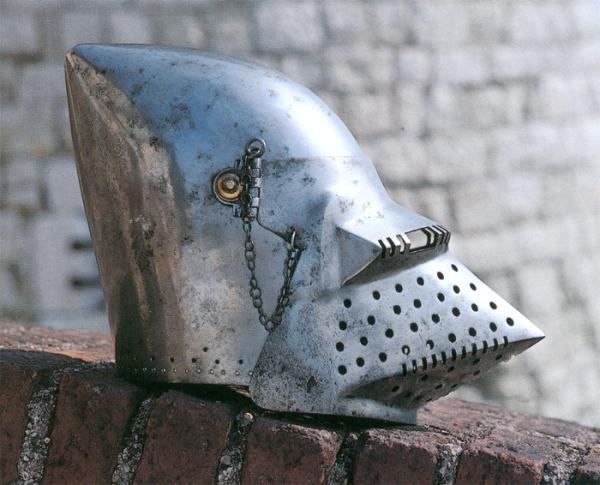 It's worth to say, that bascinet with conical dome and extended conical visor was the most usable model in the second part of the XIV century among the European knights. According to Boeheim, in the 1375 year 18000 troop headed by Ingram von Conzi attacked Habsburg family house. This event is also known as "Muzzle war", because almost all soldiers from the both sides were wearing bascinets with conical visors. 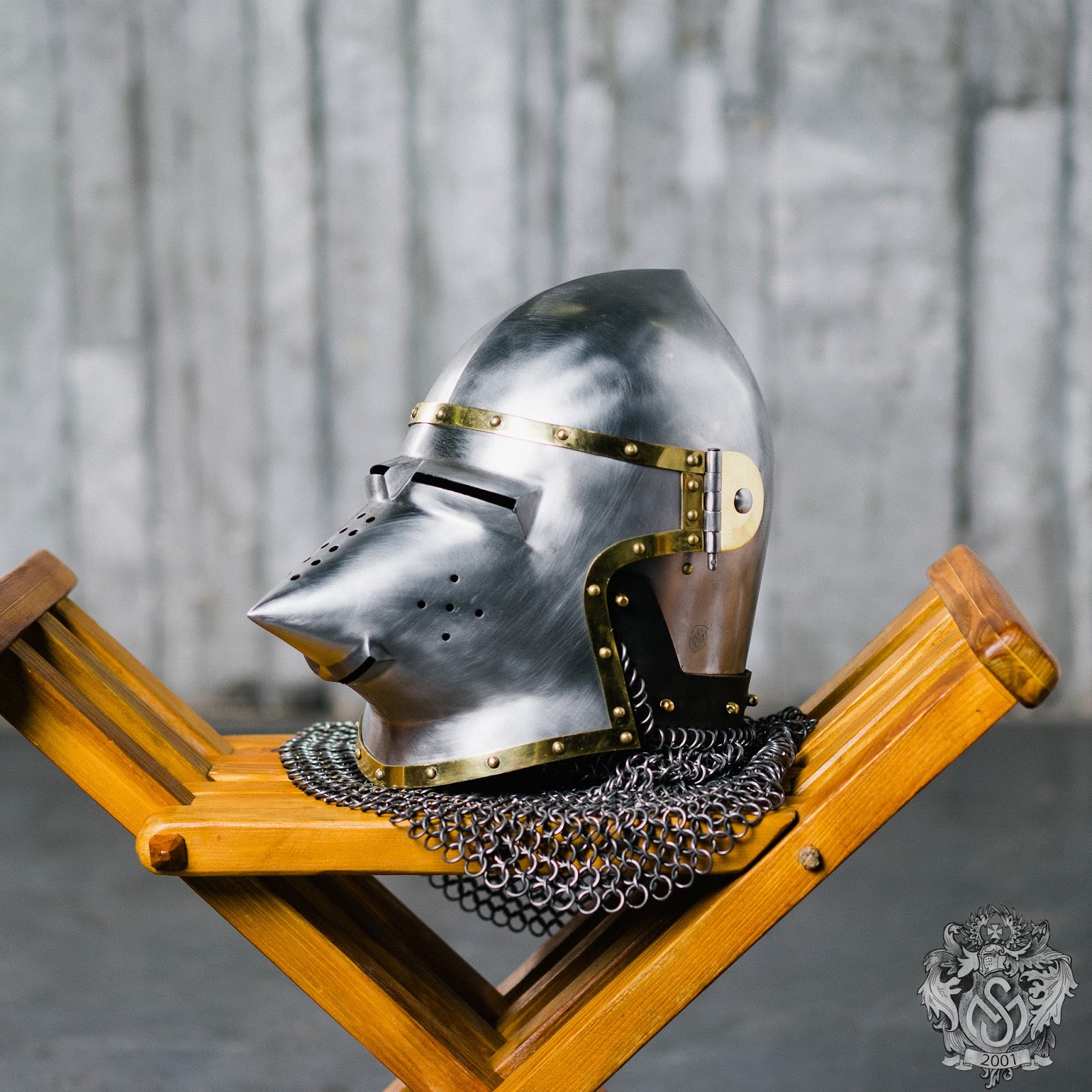 Hounskull had two narrow eye slits, skewed diagonally, which made the visor looks grim, or a horizontal slit, attached to the bridge of the nose, and few breathing holes at the mouth level. Interesting feature of these helmets was that all holes were place only on the right side of visor. It was caused by fact, that enemy's spare usually hit the left side. 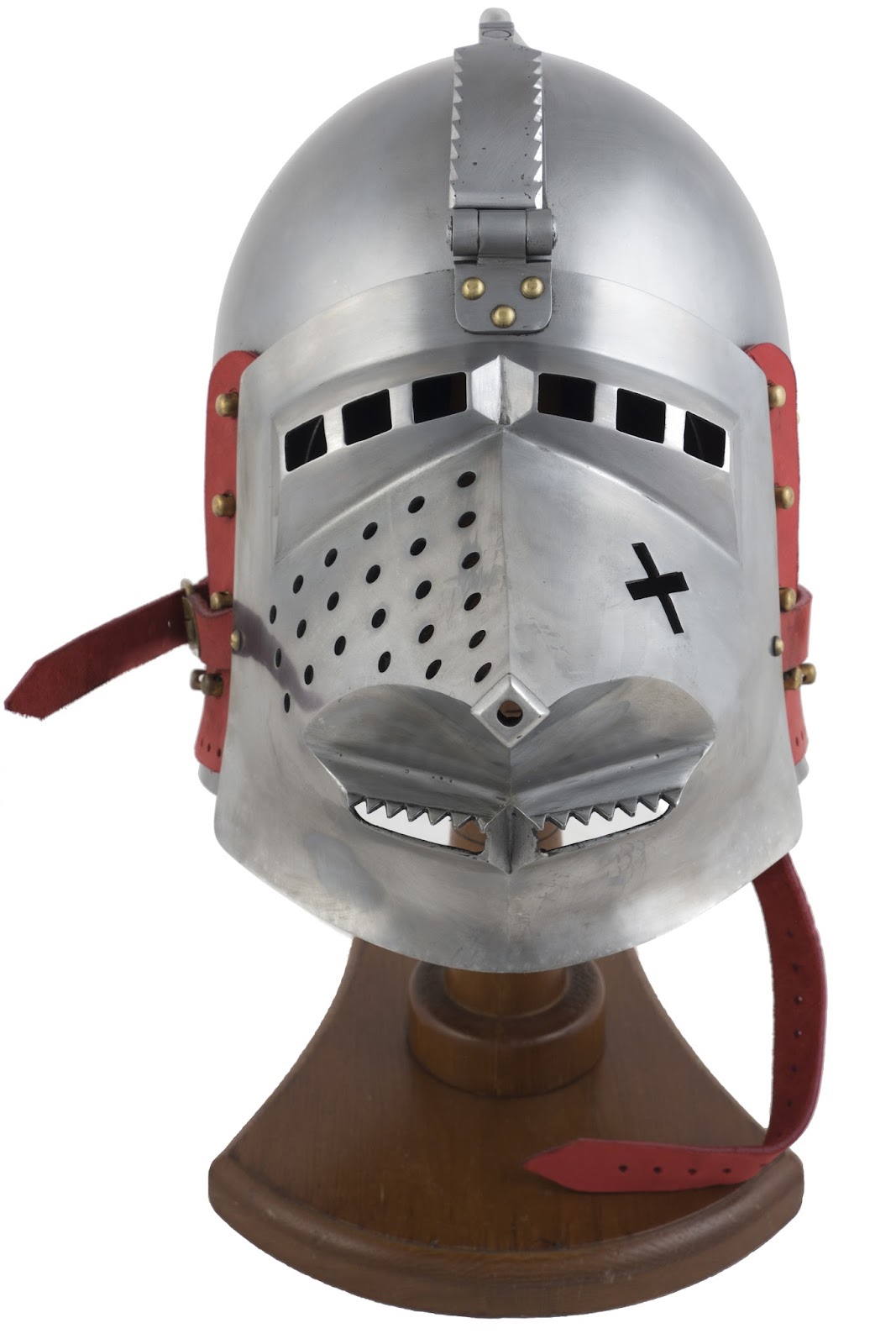 Armourers were designing visors of bascinet in such a way, as to minimize injures of eyes and the whole face of the enemy's weapon, especially spare. Pursuing this aim, armourers were making lumiere not more than 8 mm. Edges of lumiere were framed with reinforcing arcs, what allowed straight strike counteracting. Nevertheless, we have to point out the fact, that among German type of Hounskull visors, wider eye slits can be met. Vertical bar grids, crossing the slits, were quite widespread these times as well. The main function of these grids were to decrease the possibility of stricking the eyes. But such protection has been achieved at the expense of good visibility. 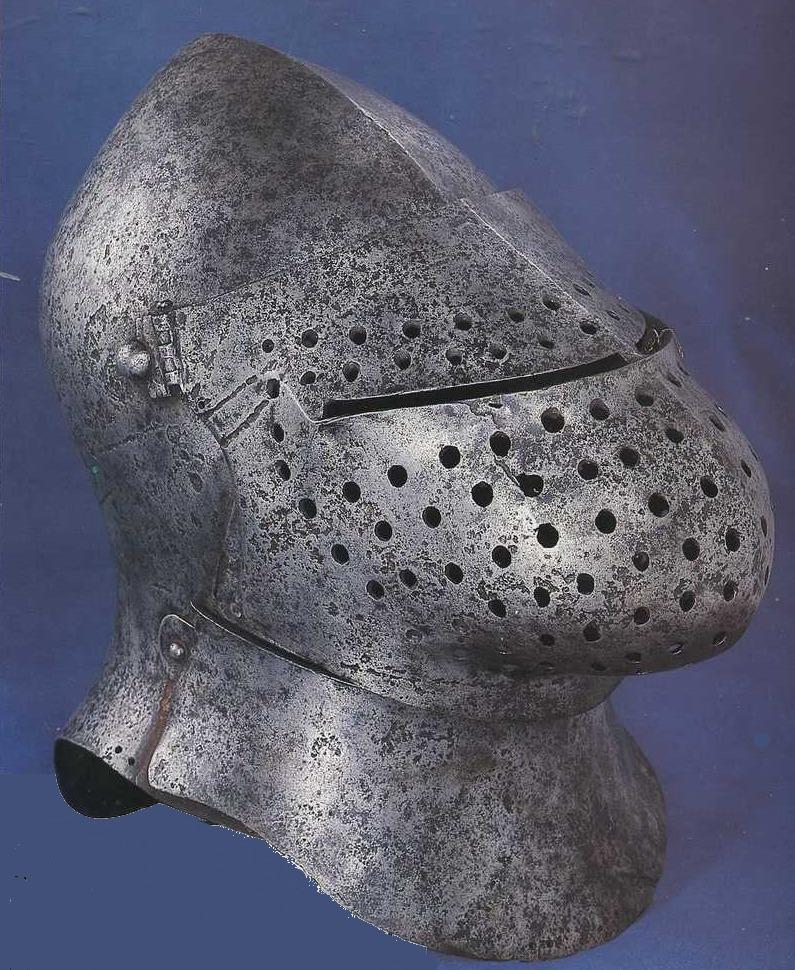 Along with Hounskull visors, medieval armourers were creating visor of round convex shape, which was called “pigface” (“pigfaced bascinet”). Besides the round shape, “pigface” was not far cry from its “hound” analogue. It is fair to assume, that this type of visor was developed from the first klappvisor, which also had convex shape. 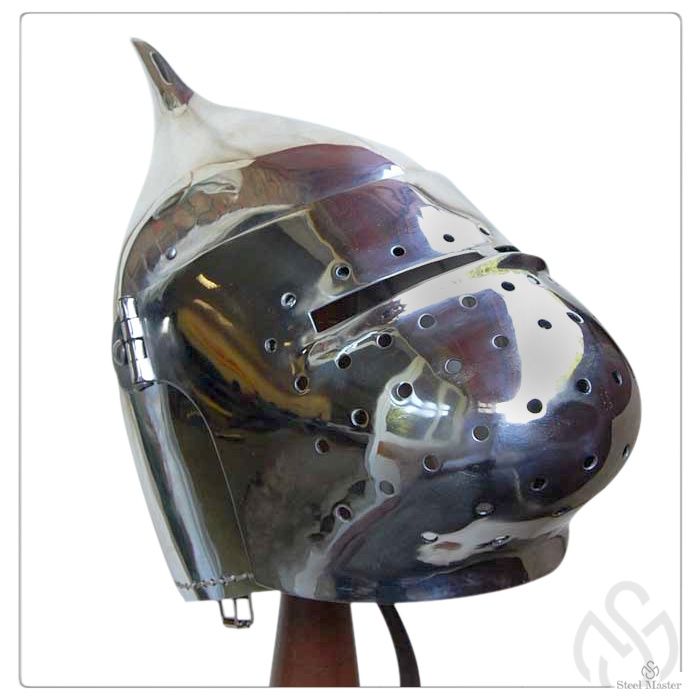 Starting the XV century, visor of Great bascinet resembled “pigface” increasingly. But some historians of medieval armature, especially in English literature, do not separate it as certain type of visor.

In time, back part of bascinet became longer, hiding the neck. Gorget protected neck from the front. The latest tournament Grand bascinets were attached to cuirass and almost stood at the knight shoulders. 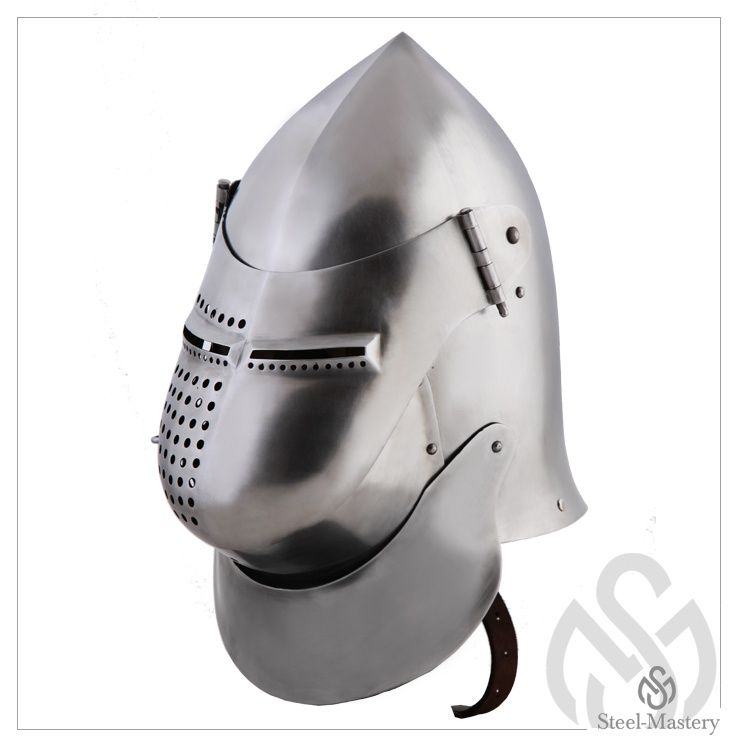 One the rarest visor type is “Wolf ribs”. It was made as grill and fixed as klappvisor. 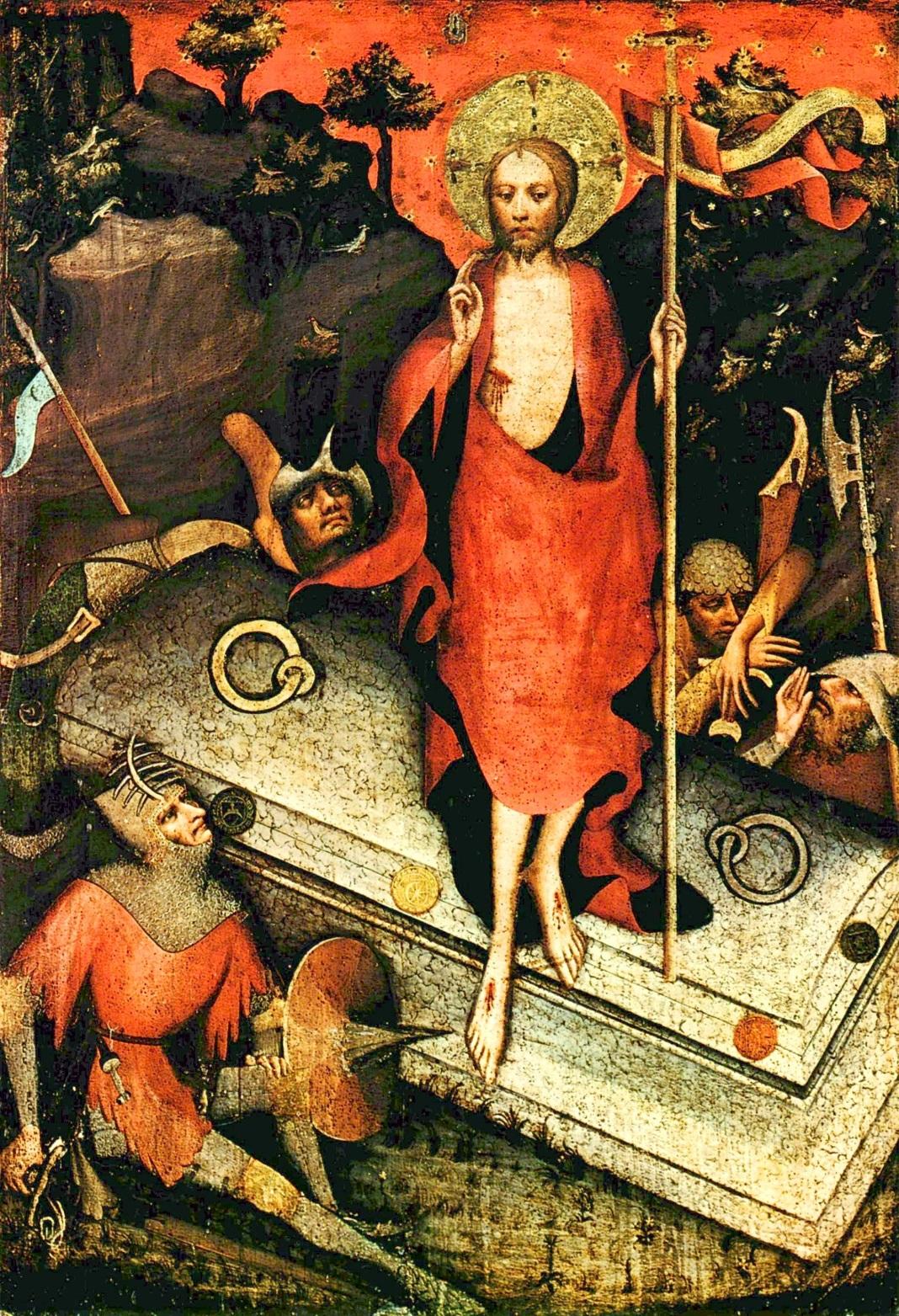 There are no real evidences of such visor existing. But historians suggested existence of this visor, basing on few paintings of "wolf ribs" bascinets. For example, there is a warrior depicted on the panel of Trebon Altarpiece. Warrior’s bascinet has grilled visor.

Images of helmets with similar face protection can be seen also on the fragment of Karlsruhe altarpiece “Christ Carrying the Cross”. 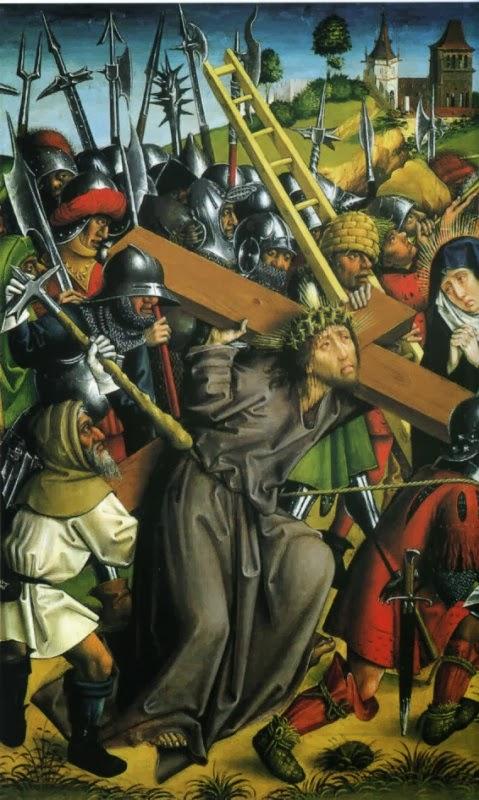 Basically, bascinets visors were being closed due to its weight and close fit of side pins. However, in the middle of the XV century, different holding fixtures, which locked visor in closed position, were being developed actively. Nevertheless, modern types of visor fixation in the closed position are far cry from the medieval ways of fixation.

Steel Mastery crafts bascinets with different types of visors of cold-rolled or stainless steel of 1.5 mm, 2 mm or 2.5 mm. One model of bascinet can be supplied with few removable visors. We strictly recommend to sew padded liner inside, or to install it on rivets. As it will make using of hemet not only comfortable, but also more safety.

But if the road less travelled, you can handcraft helmet bascinet by yourself! Just follow thi link to know, how to do it.

And of course, don't forget about padded liner - necessary accessory not only bascinet, but also for such medieval helmets as sallet, armet or helmet of the Golden Horde.

We used some information and illustrations for this article from: Claude Blair “European armour, circa 1066 to circa 1700”; David Edge, John Miles Paddock “Arms & Armor of the Medieval Knight: An Illustrated History of Weaponry in the Middle Ages”; Brian R. Price “Techniques Of Medieval Armour Reproduction: The 14th Century and everpresent web:) Pictures, not belonging to "Steel Mastery", are taken from the web. We do not pretend to be an owner of them and use them as illustrative example only. 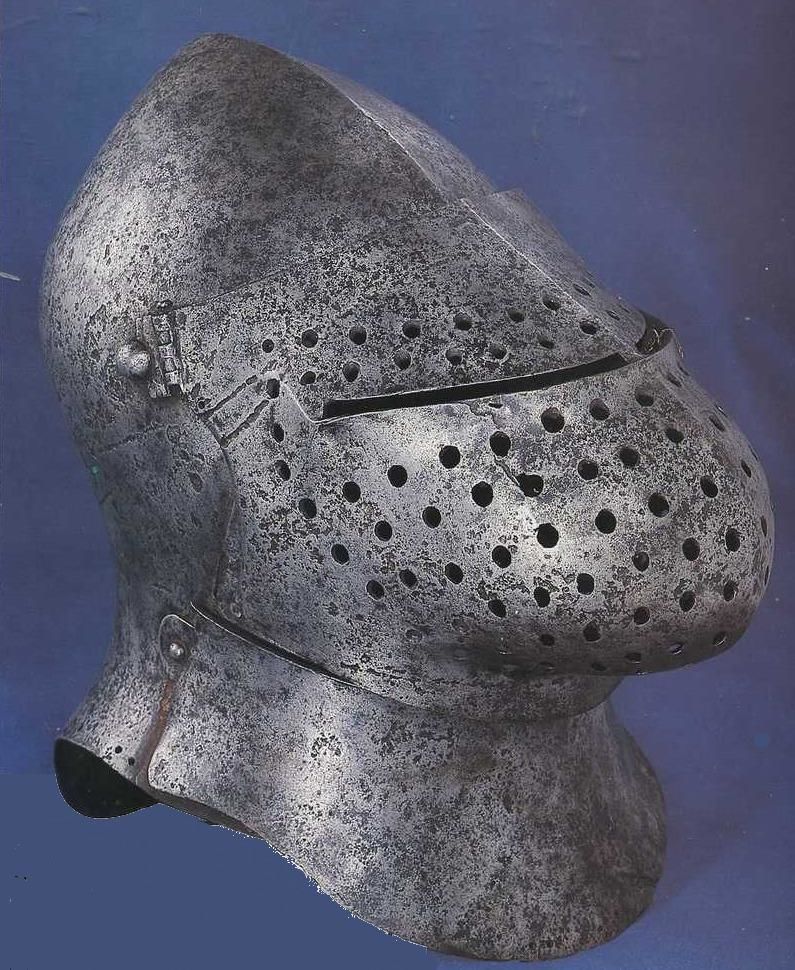