Starting its way as entirely practical elements, after a while, torse and mantling became a symbol or true knighthood and must-have of knight emblem.

In the beginning was a torse… No, not like this,

Firstly, in time of the first Crusade, crusaders were boiling in their mails and crusader helmets alive and saw agal on the heads of Bedouins. This thick fabric roller, stuffed with crude wool, twisted and tied in a ring, was pressing keffiyeh to bedouin’s head, preventing sunstrokes and cushioning an impact of sabers. By admiring the smarts of the Saracens, knights shamelessly borrowed design of agal, slightly changed it and called a torse. After returning in Europe, crusaders were not in hurry to throw heretical accessories out, so the torse became a high-status medieval headband, a symbol that knight was really taking participation in Crusades, killing heretics under glaring sun, but not relaxing in the north chill.

During the second Crusade, noble men with a faith on the tips of swords realized a core of main purpose of torse – to keep a keffiyeh, which guarded against the sun. And again, borrowing Saracens’ invention unashamedly, cream of knighthood renamed keffiyeh into mantling or lambrequin and decorated their helmets with this accessory. In the battles and challenging campaigns, lambrequin was becoming a weirdly torn piece of fabric, which became fancy edges of expensive knight accessory in time.

Torse and lambrequin were sewn in colors of knight’s coat of arms with interlacing colors, which were specifying metal and ground. In time, they moved on the coat of arms and became an integral part of heraldry. 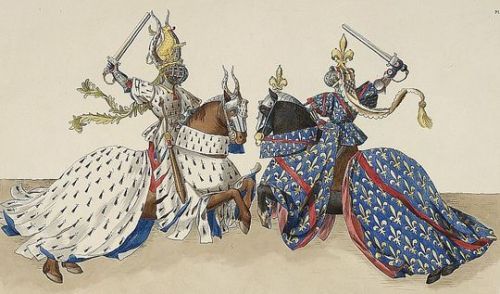 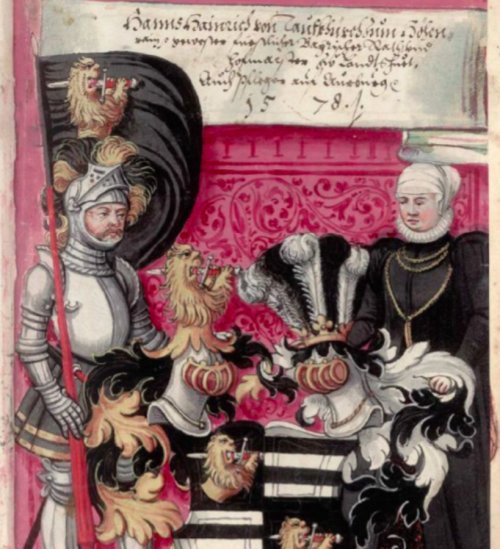 Getting ready for a campaign or tournament, modern knight can’t go without torse with lambrequin (it will be improperly!). So, Steel Mastery took care of you and ready to sew not a simple adornment, but a real knight torse with lambrequin, which is not only amortize enemy’s impact and protect against the sun rays, but will also highlight knight status of wearer. The torse look like a real crown; it is made of two thick fabric rollers, which are interwoven together. Gorgeous four-layered lambrequin has square cut festoons on the edges. Combination of dark-red enamel and gold is the most noble and rich of all in heraldry. Base fabric is cotton, however you may choose not only colors of your emblem, but also choose another fabric and we will sew it for you.

As the basic fabric we used cotton, and basic complectation is two-colored, however you may choose not only colors of your emblem, but four-colored version and also choose another fabric. Make your choice and we will sew it for you.

If you want to make this item by yourself - please write us! We will provide all necessary information by email [email protected]

Chapel-de-Fer is a variation of medieval helmet of type Kettle hat (also known as Eisenhut, Kettle helm). This functional head protection was popular in XIII-XVI centuries among soldiers of all military branches because of simpleness of making. Despite of wide variety of models, chapel had one common feature – wide brims. Great visibility and ventilation, cheapness and ease of manufacturing, protection from the front and side hits and sunrays as well - these factors made chapel actual among infantry. However, noble knights did not choose such type of head armor because of its simple design. For more comfortable and reliable wearing of this medieval battle helm, we strictly recommend to wear it over padded or mail coif. Underchin leather belt with buckle fixes helmet on your head. You can use this functional handcrafted custom helmet for: SCA HEMA Larp Stage performances Medieval festivals Reenactment events Main photo shows early medieval helmet with following options: Cold-rolled steel 1.5 ..

Tatar-Mongolian helmet of the XII-XV centuries is a real piece of art, made by artisans of Steel Mastery. Among numerous archaeological findings on the Southeast of Asia, there were spherical conical helmets with iron masks. Such masks had weird hawk-nosed faces and specific drop-shaped eye shape, wide eyebrows and antrorse moustache. Some researchers suggested that masks had simply fake character and were not used during the battle. Other historians considered that such helmets were belonged to warriors of Ancient Rus. However, M.V. Gorelik proved that helmets with facemasks were related to protective Mongolian body armor. Anthropological type, which is depicted on the mask, resounds “ancient Altaic ideal man-hero” that “had being remained in Asia despite of the change of nations, languages and races from the V century B.C until XV century A.D.”. Kipchaks mask There is also interesting opinion that such masks were making distressing impression on opponent during the fight. And, not only with its “dead” metal face wit..

Helmet “Phrygian cap” got its name after Thracian cap, soft rounded cap with the top directed forward. It was called after Phrygia, an ancient country in the central part of Asia Minor. It is known as a symbol of freedom and revolution. Such was widely used by the tribes, who inhabited Thrace, Dacia and Dalmatia in ancient times. Later, this name spread on helmets with typical, leant forward, dome. Imprints of this helmet are often found on the graphic sources and bás-reliefs dated 12th - first half of 13th century. Helmet was in active use by Macedonian soldiers. As far as we know, only one specimen of this type of medieval helmets had been found as yet. There are plates on the backside of helmet for protection of neck. Numerous holes on the visor and two eye slits allow free breathing and vision. This made-to-measure Middle Ages helmet is completely handcrafted by our artisans. You can use this functional metal head protection for: SCA HEMA Larp Stage performances Medieval festivals Reenactment events ..

This medieval padded aventail is worn under the Bascinet or Barbute type helmet. Its cut provides perfect additional protection for the shoulders and neck. High front padded part covers your chin. Aventail has lacing on the back side of the neck - 10 cm long with 4 whipstitched holes - to adjust and fix this aventail on your neck. This model is cut to fit the inclined shoulders lines and lay on breast, as well as chin covering part. It is being made of 100% natural fabrics. Different colours are available for order. ..

Black and red knight tabard with griffins and crossbow

If you are going to medieval festival, don’t forget to order awesome custom tabard at Steel Mastery’s handywomen, in which you will be recognizable among all the knights. Here is black and red linen knight tabard, unique and functional. It has simple design, besides its bottom edge and sleeves are decorated with festoons. 3 griffins are located in front and on the sleeves, and the crossbow is located on the back of the coat of arms. Crossbow of this medieval tabard symbolize generousness. The griffin was thought to find and guard mines of gold and hidden treasures! Look how does magic happen https://www.youtube.com/watch?v=N1RG9dxFuLY *** This tabard is only a sample of what we can sew for you! We can create any medieval tabard with your personal coat of arms.  You can customize next things: color – you can choose any color you wish; fabric – cotton, linen, wool, leather or other; lining fabric – cotton, linen;  your personal symbols; type of sewing of personal symbol – machine..

When you choose a coat of arms, the only one, which will adorn your standard and you knight tabard, it is very important not to make a mistake with symbols and put that sense into it, which you have in mind. And, Steel Mastery will gladly share with you examples of works, in which we have turned ideas of other dignified knights into life. This coat of arms (tabard) is only a sample to show, what we can sew for you!  There is quite unusual medieval tabard, separated on five parts with shoulder pieces and festoons on the bottom edge. The following heraldic symbols are located in front of the tabard: French fleur-de-lis  leaves  lion  2 crossed swords. Lion traditionally symbolises courage, nobility, royalty, strength, stateliness and valour! On the back part of this tabard tunic we else can see a lion. On the shoulders we can see a double-headed eagle. Double-headed eagle, being native of the Middle East, this symbol of the state authority simply screams about power, insightfulness, m..

Please login to save custom
Buy €80