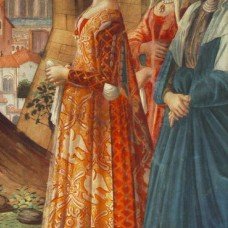 Sunny Italy was the first european country, which met the influence of Renaissance on the evolution of the costume. This process had appeared in the end of the XV century due to wealth and independence of the biggest Italian towns - Venice, Genoa and Florence. At the same time, so called Burgundian fashion was dominating on the other territory of Europe.

Staged rethinking of the human person’s role, release of people’s consciousness from the incontestability of the church postulate and contagion of humanism ideas had a bearing on the costume evolution. It found expression in the balanced division of dress and moderate emphasizing of particular body parts.

It is worthy to note, that Italian gothic fashion did not have too extreme or immoderate forms. That’s why even ardent Venetian or Florentine fashionists were not wearing too long trains, sleeves and boots with too pointed toe-caps. 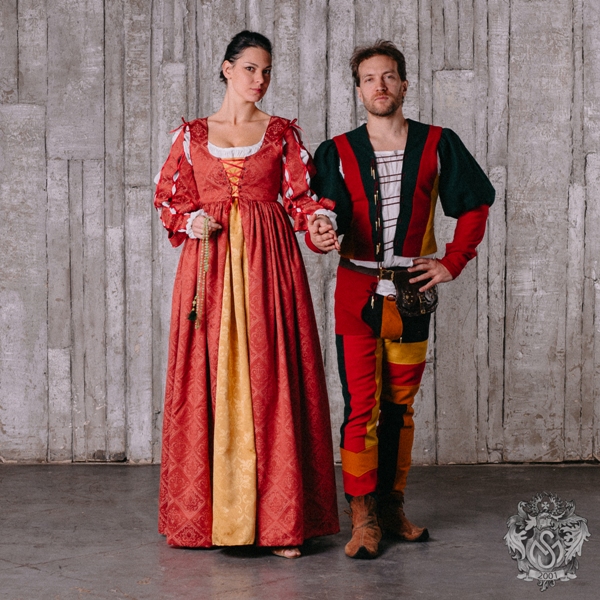 Fashion of Renaissance period declared absolutely new canons and prescribed new rules, calling to the most naturalness. Highlighting the main body parts, clothes were differ from too elongate silhouettes of the late Middle Ages. All elements had become less fragmented and gained balanced entirety. Headwears were not extending forms any more, and horizontal fair lines became prevalent.

Of course, upper class was a trend-setter. Costumes reflected social status and material wealth. But in contrast to the medieval costume with its strict regimentation about who can or can’t wear this or that piece of cloth, Renaissance time clothing was open to everyone. It was aimed to show property status of owner, but not social one. Probably, it was related to merchant class, which was developed in the early XV century. Wives and daughters of the rich traders often were wearing more luxurious clothing than members of old noble families. 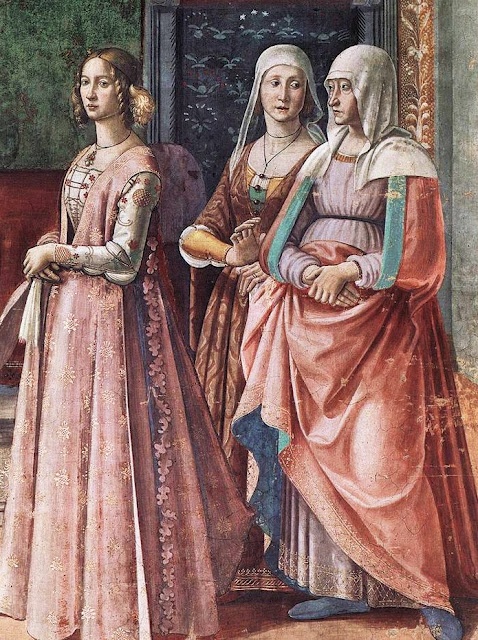 Italy had strong trade links with East and was a center of silk industry. So, there was never lack of expensive and beautiful fabrics - patterned brocade, velvet, silk, which were often decorated with embroidery. Living and intense colours gained popularity - wine-red, emerald-green, scarlet, purple and golden.

Women’s clothings were well-proportioned with simple fair lines, because they considered to be an extension of the human body’ beauty, its “second skin”.

Starting the early XV century, florentine fashionistas set the pace. On many portraits of these times, you can see an ideal of women’s beauty - slender fair woman with long neck with exalted face and expansive forehead. 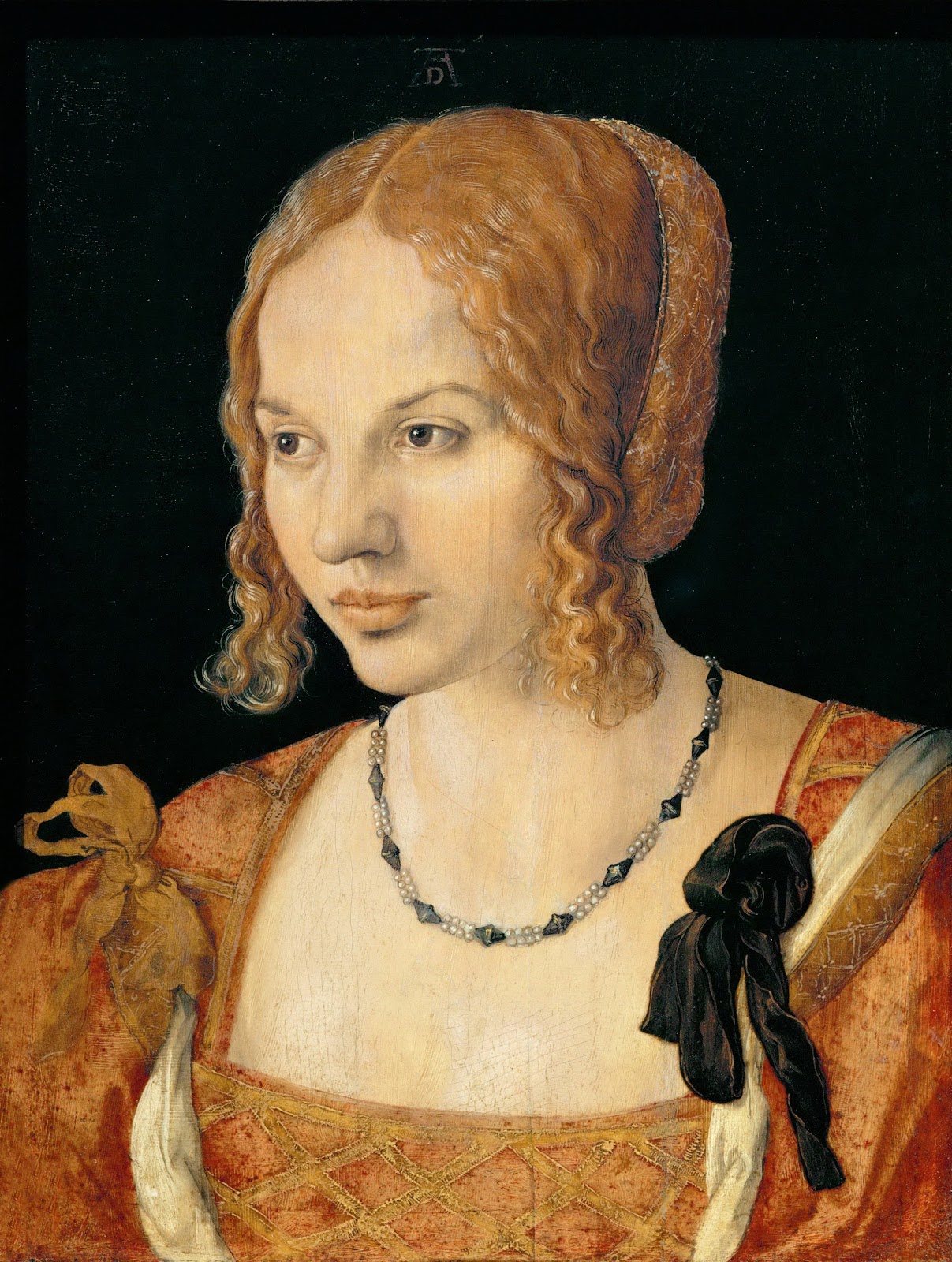 Upper dress - cotte - had easy fit and bell-shaped skirt. Waistline could be high from the front. Specific detail was shape of the decollete - square-shaped from the front and triangular from the back side, what visually elongate shoulder line. Besides, bodice could be cut from the front, and decorated with beautiful lacing.

Straight sleeves had being attached to the armhole with strings or lacing, so when needed, variously coloured sleeves could be used with one dress. Puffy shape and expensive decoration made sleeves the most important adornment of dress. Probably, crafters used all their imagination for sleeves’ accents, when creating women’ dresses. 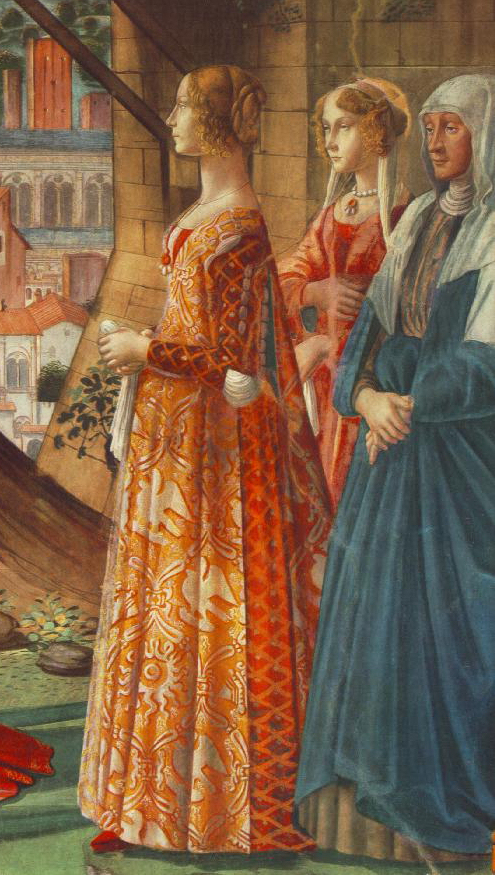 Pleats, puffs, insets and cuts were tied with ribbons, fasteners and even with pearls. The one more innovation in costume was lenght of sleeves - they did not cover hands, as it was earlier. It was allthe fashion to show white underwear through the cuts. It was showing the wealth of lady, because such underwear was very expensive and not everybody could afford it. And it became the custom a while later, but primarily, Italian women were worn only upper dress and underdress. 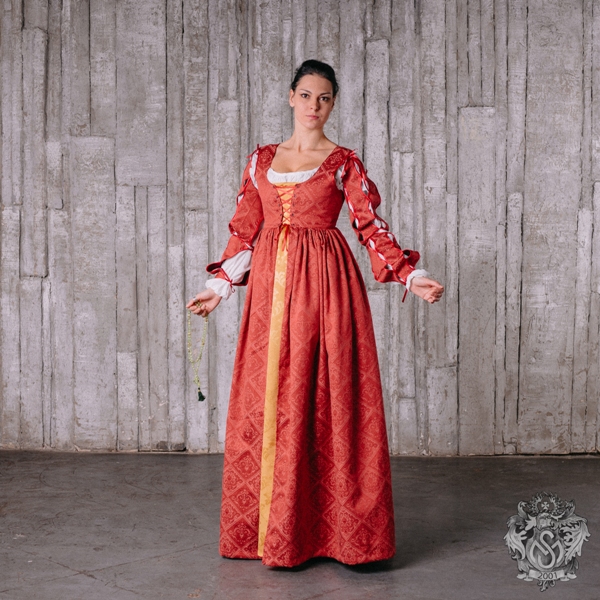 Ladies had been throwing light mantles on the dress - over one or both shoulders. Sometimes, mantles could be floor length. Long cloaks with cuts for arms and with thick (sherpa) lining were still outer garment.

As accessories, ladies used fancy handkerchiefs embroidered with pearls, beads and decorated with lace, gloves and big purses, attached to the belt.

Early Renaissance men’s costume was highly competitive to women’s dresses with pomp and pageantry. Tight-fitted doublets similar to the burgundian models existed, but did not have extreme shapes, such is very tight sleeves, pointed silhouettes. So, clothes were much more comfortable.

White linen undershirt was long enough to be tucked into the pants. Sleeves of shirt were so puffed, so they could be passed through the cuts to create plenty of puffs. Neck hole was ruffled and had strings. Often, shirt was decorated with ribbons or laces.

A Legend of Saints Justus and Clement of Volterra. Domenico Ghirlandaio, circa 1479 year. The National Gallery, London, UK.

Over the shirt, men were wearing doublet, which were fastened with buttons or closing from the front. Length of doublet could be very short (to the waist level), or could cover the hips. As a rule, sleeves were fixed to the sleeve cap with little fasteners or wide ribbons. As a result, a man had freedom of movements and variety of clothing, as he could attach different sleeves to the one doublet. 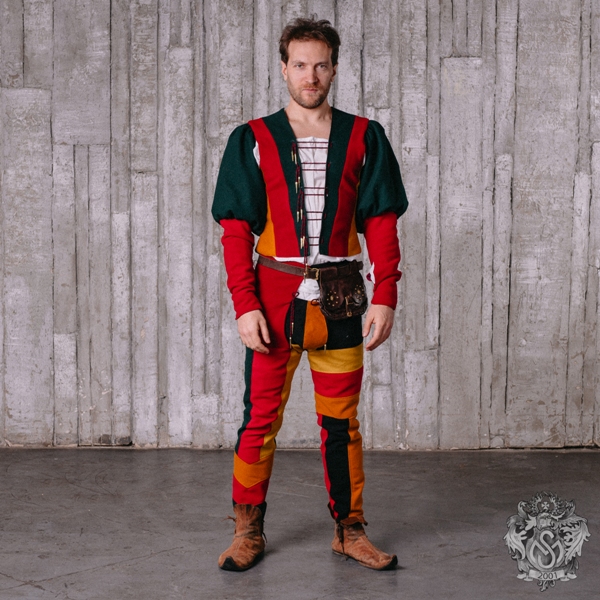 On the leg, italian chevaliers were wearing tight pants - hoses sewn of the resilient fabrics, which did not hinder the movements. In the XV century, some innovation in men’s fashion has appeared. There was a codpiece, which combined two parts of pants and was attached with lacing or small buttons. For long time, men were wearing multi-coloured hoses, for example, one pant leg was sewn of unicolour fabric, and the second one - of strips of different colours. 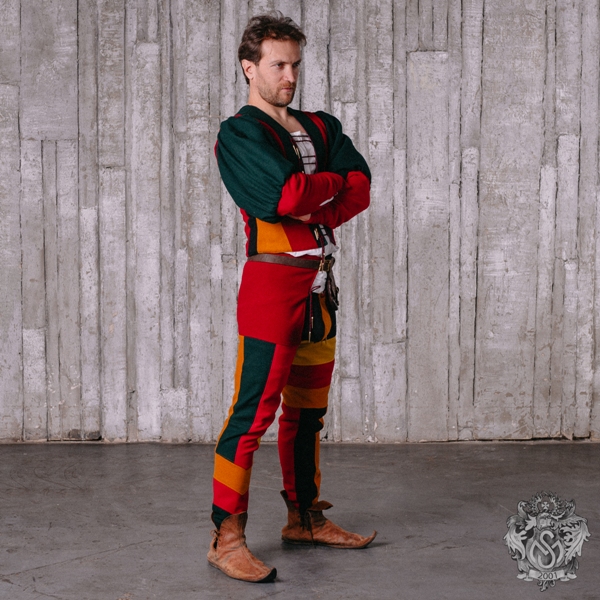 Hoses were attached with lacing to the holes on the bottom edge of doublet. At the same time, lacing was not too tightened, so undershirt could be seen between the hoses and doublet. Men began to wear short puffed haut-de-chausses over the fitting stocking only in the end of the XV century.

Coats were widespread in italian fashion at the time. They could be fastened or tied to the upper part of doublet. Length varied: sometimes, coats were middle-thigh length, and sometimes they were dragging on the ground. Up to early XVI century, venetian fashionists were wearing coats with pelerine type collars.

Men’s headwears were notable for variety of cuts, shapes, fabrics and decoration, such as bright long feathers, laces and gems. Some dandies were even wearing two hats at the same time: one on the head, and the second one was laced to the shoulders. Hanging pursues and gloves were the most popular accessories.

Balance in proportions, bright colour-scheme and wanting to accent specific individuality of costume owner were typical for gowns of the Renaissance epoch. In such a manner, in consequence of the revival of ancient world’ humanist ideals, general concept about the beauty has been changed.

If you want something special, just send us picture by email [email protected] and we will create it for you!

We used some information and illustrations for this article from: Jaqueline Herald “Renaissance Dress in Italy 1400-1500”; Jacob Burckhardt ”The Civilization of the Renaissance in Italy”; W. Bruhn and M. Tilke “A Pictorial History of Costume”; Tarabukin N.M. “Notes of the history of costume”; Mertsalova M.N. “Costume in Different Ages and Nations” and everpresent web:) Pictures, not belonging to "Steel Mastery", are taken from the web. We do not pretend to be an owner of them and use them as illustrative example only. 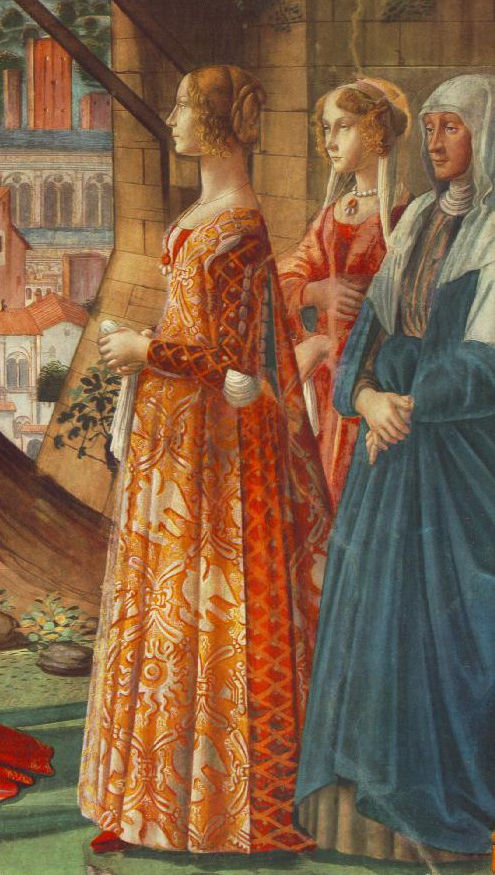