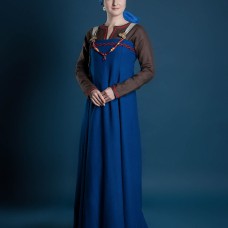 Here comes Frigg! A goddess of marriage, bearing, wisdom and prophetess; foremother of Æsir and supreme goddess of Asgard.

Such a mighty woman doesn’t need an overemphasis of her status. Her outfit is strict and simple, but it just underline high status of goddess. 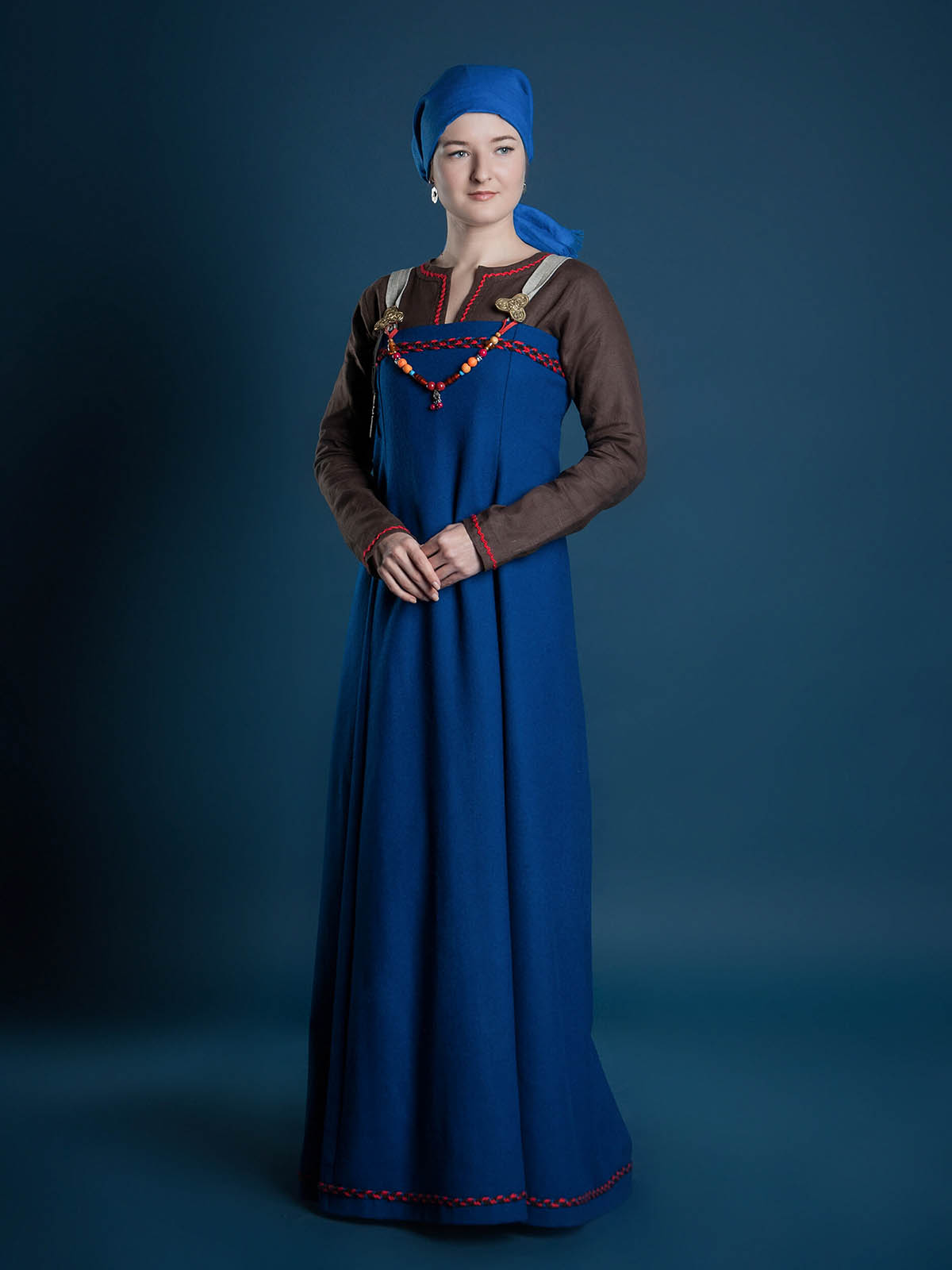 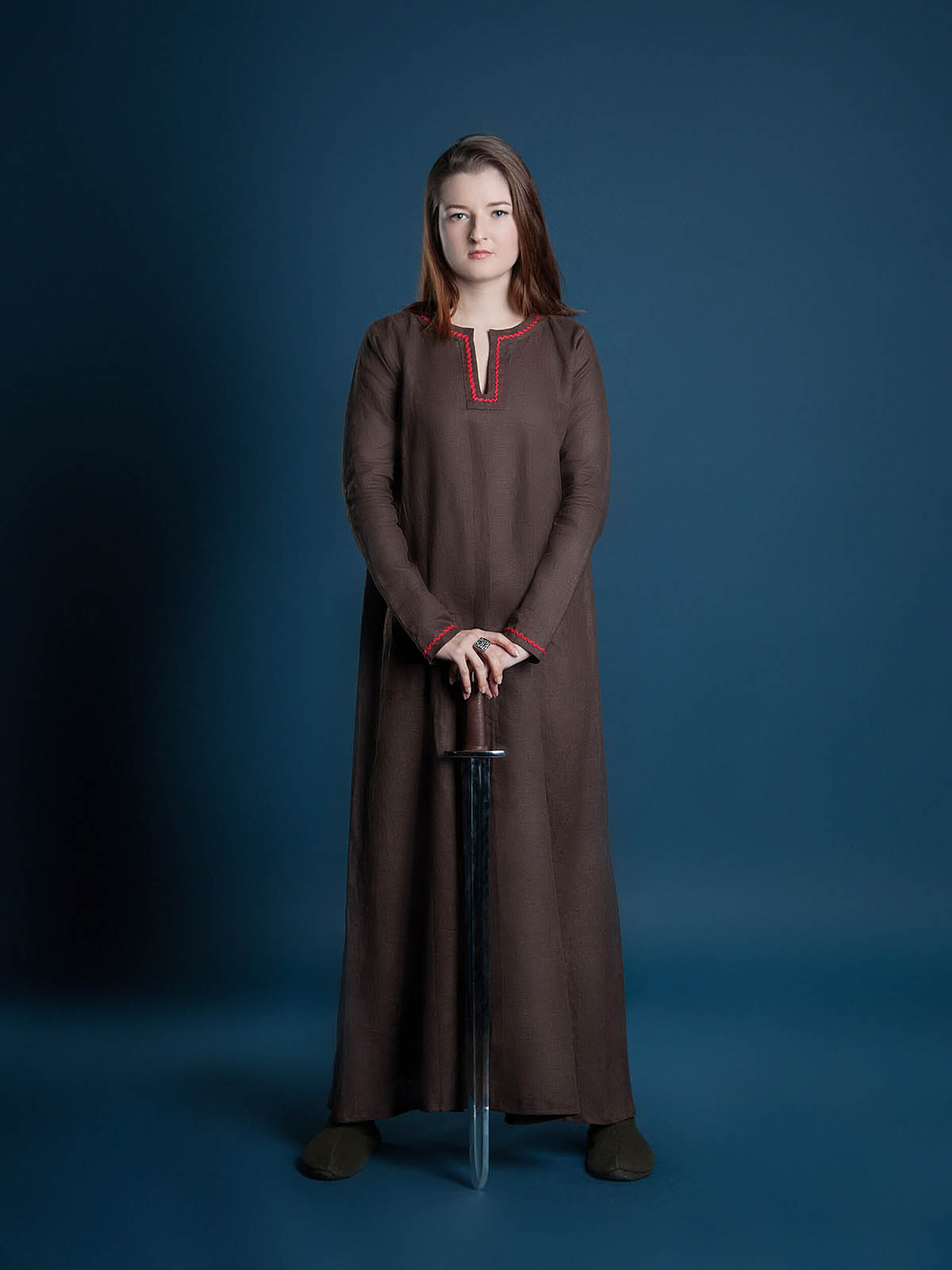 So, after leafing through doctoral thesis of Inga Hagg of the 1974 year (which is deicated to woman Birka dress Kvinnodrakten i Birka, AUN 2, Uppsala) – a “fashion magazine” of every self-respecting Scandinavian woman and after visiting of show-room of Scandinavian couture (The Swedish History Museum in Stockholm), we are glad to provide you with dress of Frigg.

Chemise and hangerok are only two things, which you’ll require for creating of this look. They are necessary and self-sufficing, nothing in excess. Maybe, few more trinkets, but let’s talk about them later.

Frigg’s chemise is not just made of linen, but also dyed in deep brown color, amazing in its modesty and style. Neckline and sleeves are decorated with finest embroidery of blood red thread. Remains of linen fabric were found in burial places of Kragelund, Hedeby and Birka. That’s why we can confidently use it for sewing of Scandinavian dresses. Burial 735 in Birka provided with a sample of how chemise has to look like: 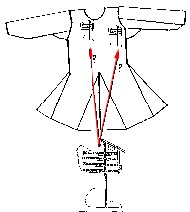 To be sure 100% in authenticity of this chemise, we had a look at cut of finding in Bocksten hog. Such cut was typical for underwear in the North Europe of the VIII-XIV centuries. Now this chemise is kept in the Halland Museum of Cultural History в Varberg, Sweden. 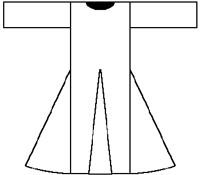 Well, our chemise differs from its Bocksten “relative” with small cut on the neckline. We offer to fasten this cut with beautiful handcrafted fibula. You may order this adornment in our medieval shop separately.

However, in full measure, chemise reveal its loveliness just with combination with hangerok of living blue color. We were examining all findings from Hedeby and Birka, figures of Valkyries, golden figure for Hnefatafl from Tusa and with Inga Gagg’s blessing, we created this modest and classy hangerok. 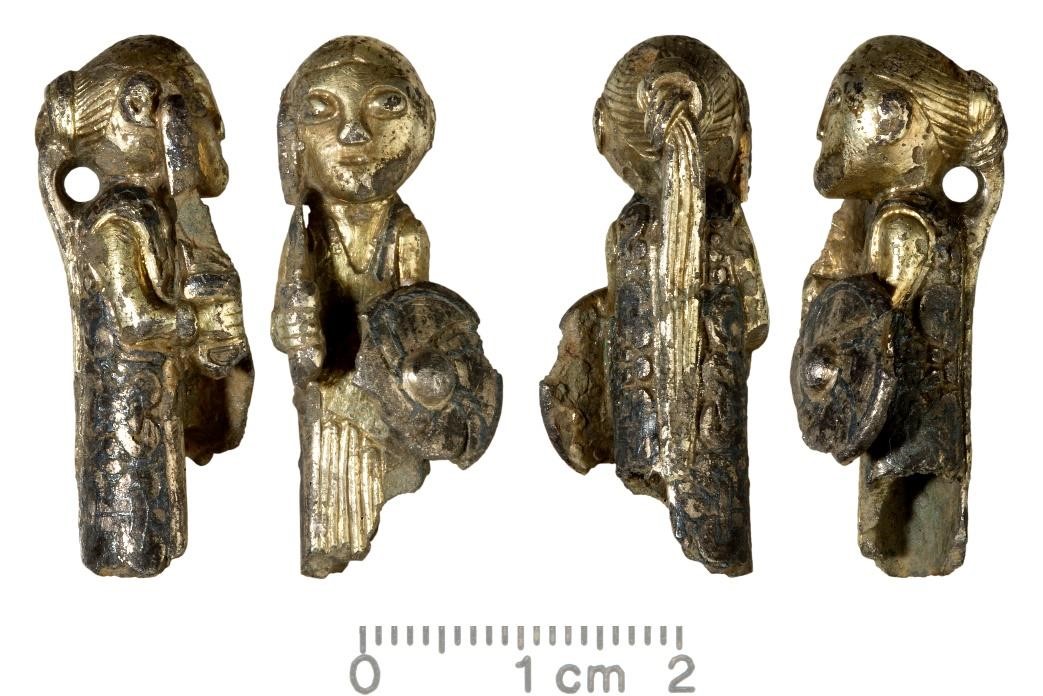 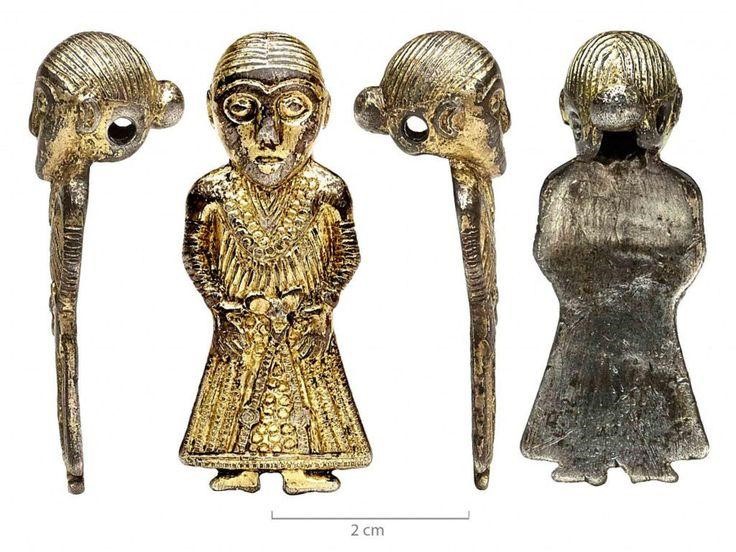 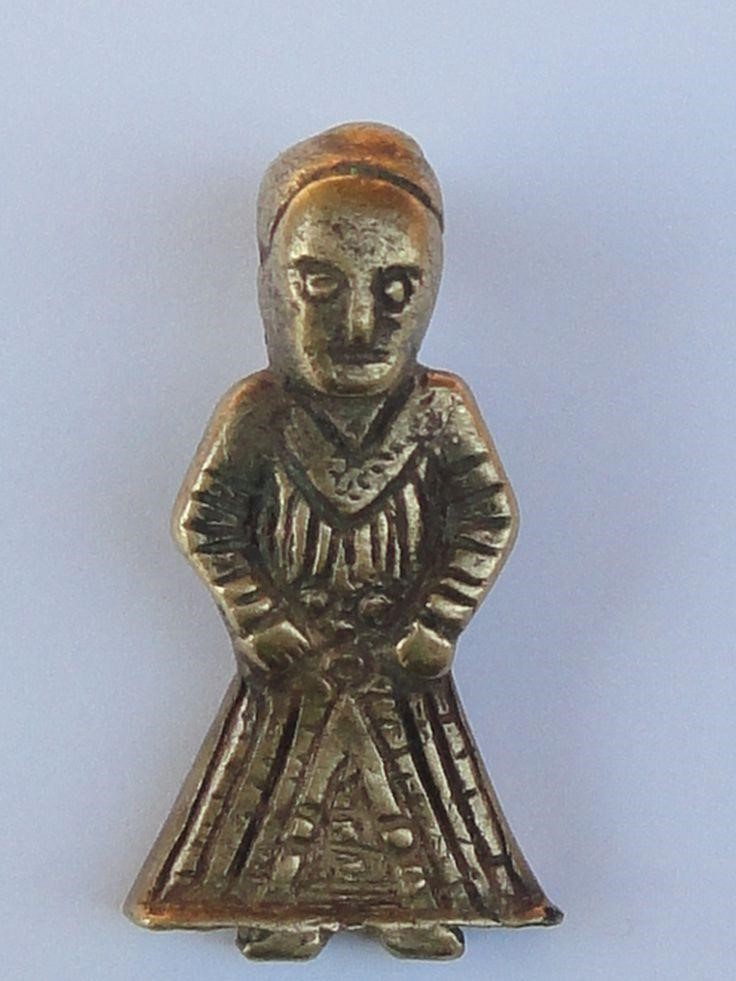 It has to be said that there were five pieces of clothing, which you could see on the Scandinavian woman: chemise, dress, hangerok, coat and cape. Chemise was a necessary thing. Other elements could be combined in different ways.

Frigg’s outfit includes the most classic variant – chemise and simple hangerok, strict but elegant. This the most common look is in the middle. 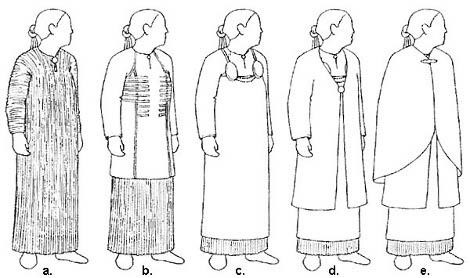 Well, and do not forget to cover head with kerchief and adorn yourself with fibulae for hangerok. The same, which were excavated and exhibited in The Swedish History Museum: 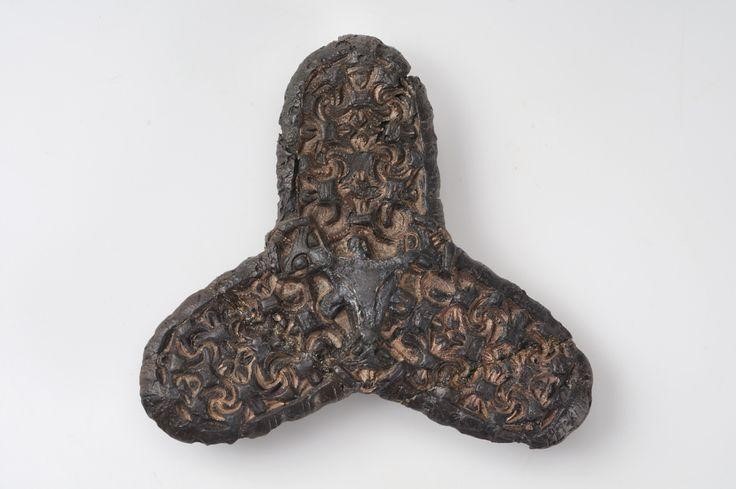 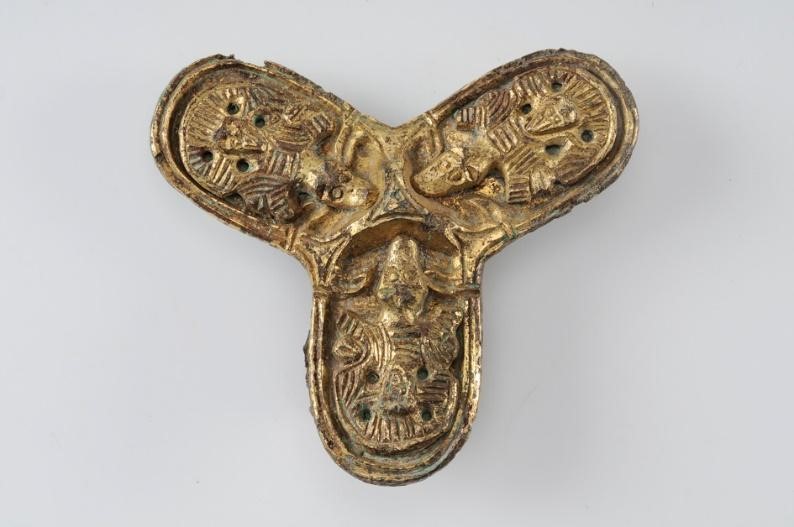 Also, astonishing necklace of such classy beads, from the same museum: 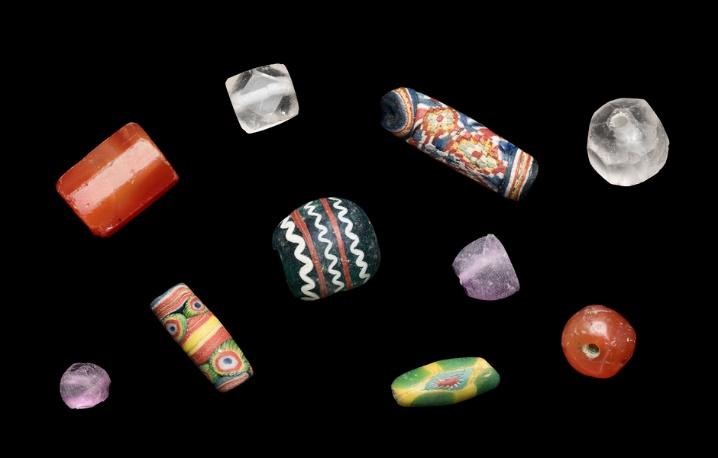 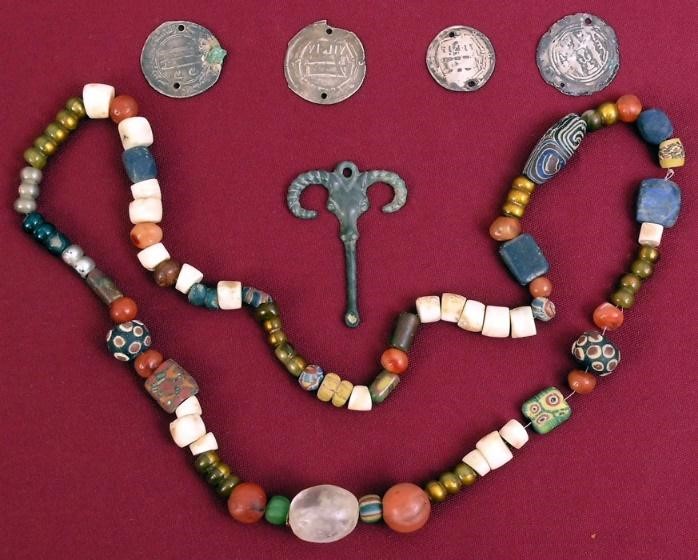 Ah, yes! Symbols of Frigg are spinning wheel and belt with runes, but it is so trivial. Apart from everything else, let’s remember that supreme goddess is also a prophetess. She knows fate of every person, but she doesn’t share her knowledges with anyone! So, we recommend to complete your garb with a pouch with runes, read them in full view of the other persons, but do not tell them a result. Just smile mysteriously. You are, Hell takes you, a supreme goddess! You can do everything you want!

All that beauty you may see alive in Birka Museum, Swedish History Museum and Hedeby Viking Museum. We just made all the work for you and created awesome and beautiful outfit, in which you will be a real goddess. ;)

We got a pair of these (as part of a set) for our son (17) and they are superb. The workmanship is second to none and the attention to detail wonderful. They're heavyweight, sturdy and feels like they should last a lifetime.