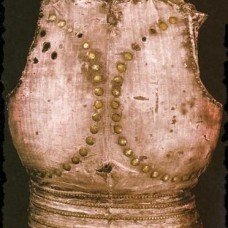 Munich brigandine is one of the most interesting historical artefacts that has survived until our days in good preservation. Truly speaking, velvet, which used to be very classy, has frazzled and lost its bright scarlet colour, and flower pattern on the rivets has dulled. Besides, remained details and outer look allow us estimating the design and functionality of brigandine. 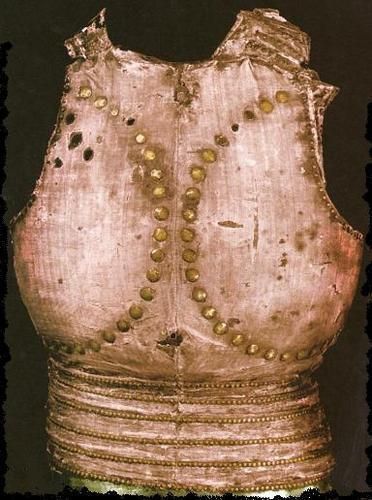 This amazing sample of arms art was found in the Armoury of Hohenschwangau Castle – one of the numerous castles of Bavaria, which were family seats of noble German gens. Approximate time of brigandine construction is 1380-1400 years. Now it is a centerpiece of weapon collection in the Bavarian National Museum in Munich, Germany.

Many researchers, including Claude Blaire (“European Armour”, chapter 3 – “Early plate armour, c.1330-e. 1400) consider that this body protection can be referred to Milan style armour. Some details have mark, which is probably belong to Italian artisan.

Metal elements are covered with heavy scrim fabric and thick velvet over it. Seam in the middle of the front part connects two halves. Below the waistline, velvet takes a shape of a skirt with six narrow metal strips on its inner side. These horizontal strips are overlapped and fixed with six smooth rows of small rivets.

Unfortunately, back parts of brigandine were not extant. Besides, there are three small plates and steel pin on the left shoulder, which had been designed for fixation of protective back plates. Concerning types of fastenings, there were two of them.

First variant was considering belt fastenings on the sides, hidden under arms. Availability of double row of clasps allowed more comfortable fitting of armour on the body. In addition to it, knight could putting on and taking off a brigandine by himself.

A falling knight, XIV century. The Cathedral Church of the Blessed Virgin Mary of Lincoln, England

As probable confirmation of this version, we can examine a statue from the Cathedral Church of the Blessed Virgin Mary of Lincoln. Falling knight, pierced with an arrow, is armed in body cuirass that is very similar to brigandine from Munich. Back part and skirt consist of small separate segments. At the same time, there is probably meant to be a large solid breastplate from the front. However, there are not belts on the back part of armour, as fastenings are placed on the sides.

Alternate design implies fastenings on the backside. Similar solution can be noticed on the statue of Saint George (Jiří) Fountain (Czech Republic). 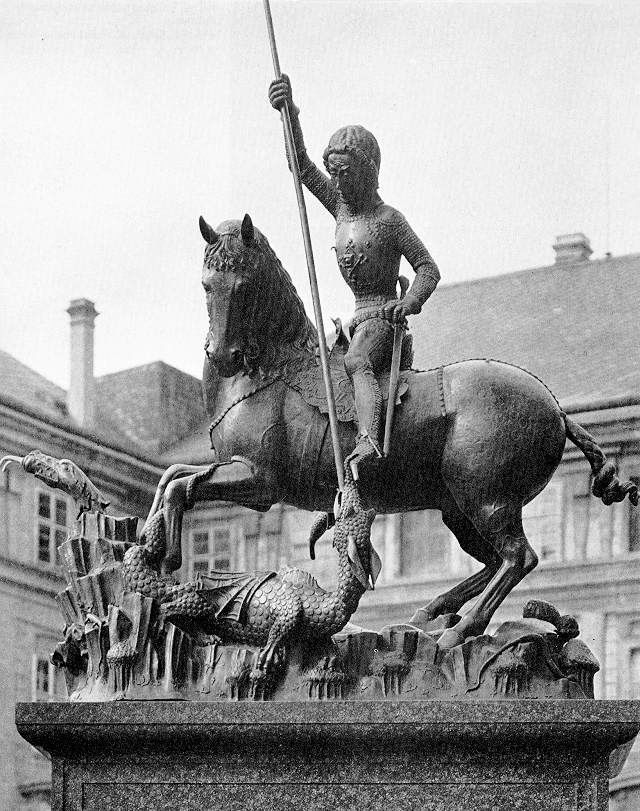 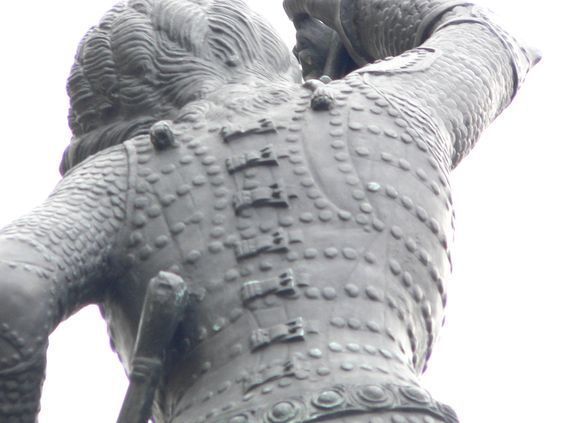 Protection gear of Saint George looks similar to the brigandine from Munich. There are the same large bowed breastplate, the same plate skirt of few narrow strips, even similar rivets location. Finnish archaeologist Bengt Thordeman was speaking for similarity of these two designs in his book «Armour from the battle of Wisby» (1932 year).

Lamellae create kind of cuirass of anatomical shape on the back part and sides, which allows free moving and bending to any side. At the same time, armour has seven small belts with buckles on the back for fastening. As this statue, so other survived images make the case that both variants of brigandine fixation had being used in the XIII-XIV centuries. 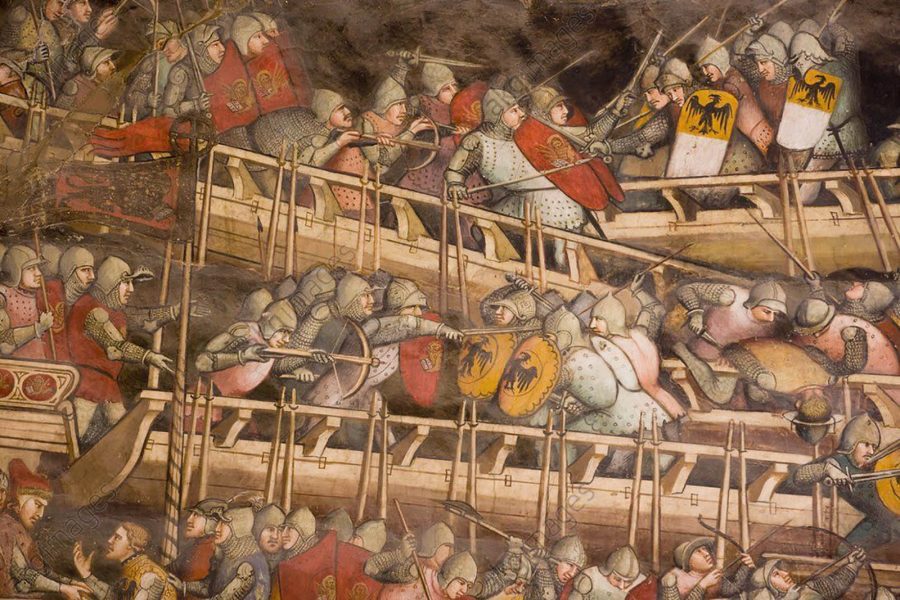 ▪    Transition period, which is characterized by enlargement and transformation of breastplates – 1330-1410 years,

This genesis throws into sharp relief evolution of body protection, which was continuous during several centuries. Large bowed waist-length breastplate allows referring sample from Munich to the armour of transition type. Thus, in time, relatively small and flat breastplates, that were hardly reaching diaphragm, had been developed into complete plate cuirass covered with fabrics.

Also you can see all other brigandines and cuirasses which we can produce for you. And don't forget - if you want some armor, which you can't find on our web-site, please, write us e-mail on [email protected]. We make a lot custom orders :) 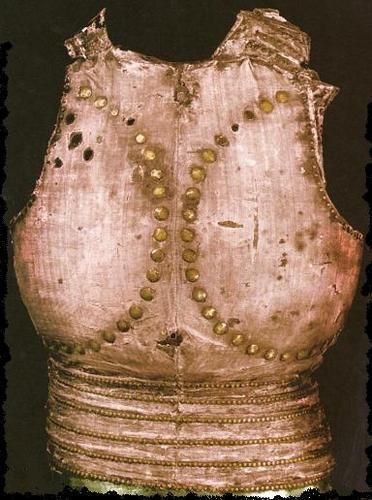 I ordered this helm with some changes. The face plate on mine has squarish holes for the eye slots. The production time of my helmet took twice the length advertised however, Steel Mastery did compensate me for my time by adding brass accents and an aventail as a bonus. The helmet and faceplate were heatreated. The only modification I had to do was to add a retaining strap for the faceplate.Their staff was very friendly to deal with and would write me back within one to two business days. I would recommend them. I am very happy with my bascinet. I have used once so far in SCA type point combat with blunt steel weapons and it held up fine.