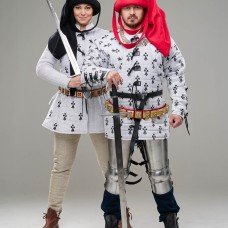 What better way for the experienced reenactor and the one just taking their first steps into living history than with ready-made costume and armour sets? If you have to dive into the first third of the XIVth century and just need to look cool and dignified, then we have gorgeous, luxurious, stylish and, most importantly - fully finished gambesons of the relevant period. Or maybe - complete sets of costume and armour, from the undershirt to the plume on the helmet.

Our inspiration and source after the Battle of Poitiers was such a stage of the Hundred Years' War called the War of the Breton Succession. Why that one in particular? Well, apart from the fact that it's its turn chronologically, the story itself is amazingly entertaining and the gambesons came out just amazing.

We're sure you recognise the Charles de Blois gambeson, even in the white linen with black ermine print. What we particularly love dear Charles for is not only his participation in the events below in a major role, but also the fact that his authentic gambeson has survived. You can find it in The Textile Arts and Decorative Arts Museum, Lyon, France. Well, we happily and thankfully use it as an inspiration and source for many of our gambesons, including this ones. As for the ermine print on the fabric, we can only remind you that it is the coat of arms of the Duchy of Brittany. 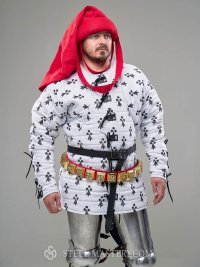 The second white gambeson is also inspired by Charles's gambeson, but has been slightly modified by our fashion designers to embody the image of Jeanne la Flamme, who fought on the other side. It features a double print - still the same black ermine on one half and a black rampant two-tailed lion on the other.

An ermine and a lion

So why an ermine and a lion? This marvellous story began when Arthur II Capet-Dreux de Bretagne, Duke of Brittany married twice. Times were hard, and his first wife died giving Arthur 3 sons: Jean III de Bretagne - heir to the Duchy, Guy VII de Limoges and Pierre of Avesnes. Well, when his wife died, Arthur remarried and his second wife gave him 6 more children: Jean de Montfort, Béatrix de Hédé, Jeanne de Bretagne, Alix de Bretagne, Blanche de Bretagne and Marie de Bretagne. We are interested in the eldest of these six, Jean de Montfort. When the prolific father Arthur died, his eldest son Jean III de Bretagne became Duke but he was childless. Shit happens. But the Duchy of Brittany throne was in need of an heir. As Jean’s III brothers died early enough and, by law, his half-brother Jean de Montfort was to inherit. But as it happened, one Jean didn't like the other one. He didn't like the other one so much that he even tried to prove in court that his father's second marriage was illegitimate and his children from that marriage were bastards. But that attempt was unsuccessful. And when it came to choosing a successor, Jean III de Bretagne thought a little and wrote a will in favour of his niece Jeanne de Penthièvre, known as duchesse de Bretagne or simply - Joan the Lame. But towards the end of his life he seems to have reconciled with his younger brother and made a more traditional will in favour of Jean de Montfort. Well, sort of reconciled and sort of made a will, but only sort of. When the Duke was dying, and he was pestered by his peers with the question of who was the heir after all, he replied, "Don't you dare trouble my spirit with such questions before I die!" and died. That's right, he just died without answering the sacramental question. Why? Fuck You... That's Why! (с)

So in 1341 the Duchy of Brittany was left with two heirs: Joan the Lame and her uncle Jean de Montfort. As you can guess, each of them had their own supporters and arguments as to their claim to the Duchy's throne.

Of particular interest to us personally is the fact that Jeanne the Lame at the time was already married to... drumroll... Charles of Blois - a man and a gambeson! Yes, that's him in the fancy ermine gambeson. Handsome, isn't he? And as well as being the nephew of the then French King Phillip VI. As you might guess, the King of France was very keen that the Duchy of Breton should go to his nephew. That's why our version of the famous gambeson is decorated with the coat of arms of Brittany (black ermine on a white field), because Charles really, really wanted to rule the Duchy of Brittany. And he fought hard for this title while his limp-wristed wife Jeanne sat at home and bore him heirs. After all, her uncle's example is a good example of the fact that it is better to have children of your own, so as not to look for heirs later on among your relatives. Because having heirs was a serious argument in such a dispute.

Regarding the gambeson with lion and ermine, it embodies the second side of the war for Breton succession - wife of Jean de Montfor Joanna of Flanders, Duchess of Brittany, better known as Jeanne la Flamme. Brittany's ermines complemented here with the Montfor family's coat of arms - a rampant two-tailed lion. While an amazing and beautiful woman in a gorgeous gambeson was one of the famous warriors of the Hundred Years' War. Seriously, in those wild chauvinistic times she commanded town defences and combat raids. So the War of the Breton Succession also went down in history as the War of the Two Jeannes.

War of the Two Jeannes

Going back to history - when Jean de Montfort realized that he was unlikely to get his rights recognized by the French king (because he was not his nephew), he decided to appeal to another king - Edward III of England as King of France. You do remember that the King of England also had a claim to the French throne and started the Hundred Years War on that very occasion, don't you? Well, Jean de Montfort paid the King of England (and France according to his own version) vassal oath, and the war over the Breton succession turned into an interstate conflict, continuing the Hundred Years' War.

It must be said that at the beginning of the conflict, luck was on the side of Joan the Lame and Charles of Blois. Indeed, in 1341 there was still an armistice between England and France, and Edward III of England could not send troops to help Jean de Montfort. In 1345 Jean de Montfort died, and his widow Joanna of Flanders became the Montfort party leader. Seriously, this woman did not just sit back and bear children. Oh no! She donned armour, took up arms and urged the other ladies to "cut their skirts and take their safety in their own hands" and personally led the defence of Hennebont. Moreover, she guided the soldiers in an attack outside the town walls and burned down the enemy’s camp. It was after this that she became known as Jeanne la Flamme, and not only for her fiery character and inflammatory speeches before the defenders of the city. Froissart described her as a lady "with the heart of a lion, and in her hand she wielded a sharp glaive, wherewith she fought fiercely". During another attack, when her troops were frightened and retreated, this lady turned her horse and galloped towards the enemy herself. Her knights were then ashamed and joined the attack, following the intrepid Jeanne. Defending the rights of her son John V to the Breton succession, she continued the war. In 1347, Jeanne la Flamme's troops even captured Charles of Blois in battle. She later, however, had to escape to England where she was declared insane under unexplained circumstances and locked up in Tickhill Castle for the rest of her life. She died there in 1374. It must be said that she outlived the other three war participants. For while her husband Jean de Montfort died in 1345, Charles of Blois in 1364 and his wife Joan the Lame in 1365.

The War of the Breton Succession itself lasted until 1364. Although much of the time luck in this war was with Charles of Blois, after his death by the treaty of Guérande in 1365, Jeanne la Flamme and Jean de Montfort son John V was recognized as the rightful Duke of Brittany and had married Mary Plantagenet, daughter of Edward III of England. And then...

And then there were many more interesting and enlightening stories, both in Brittany and elsewhere. And we'll tell you about them in the next parts. Stay tuned :) 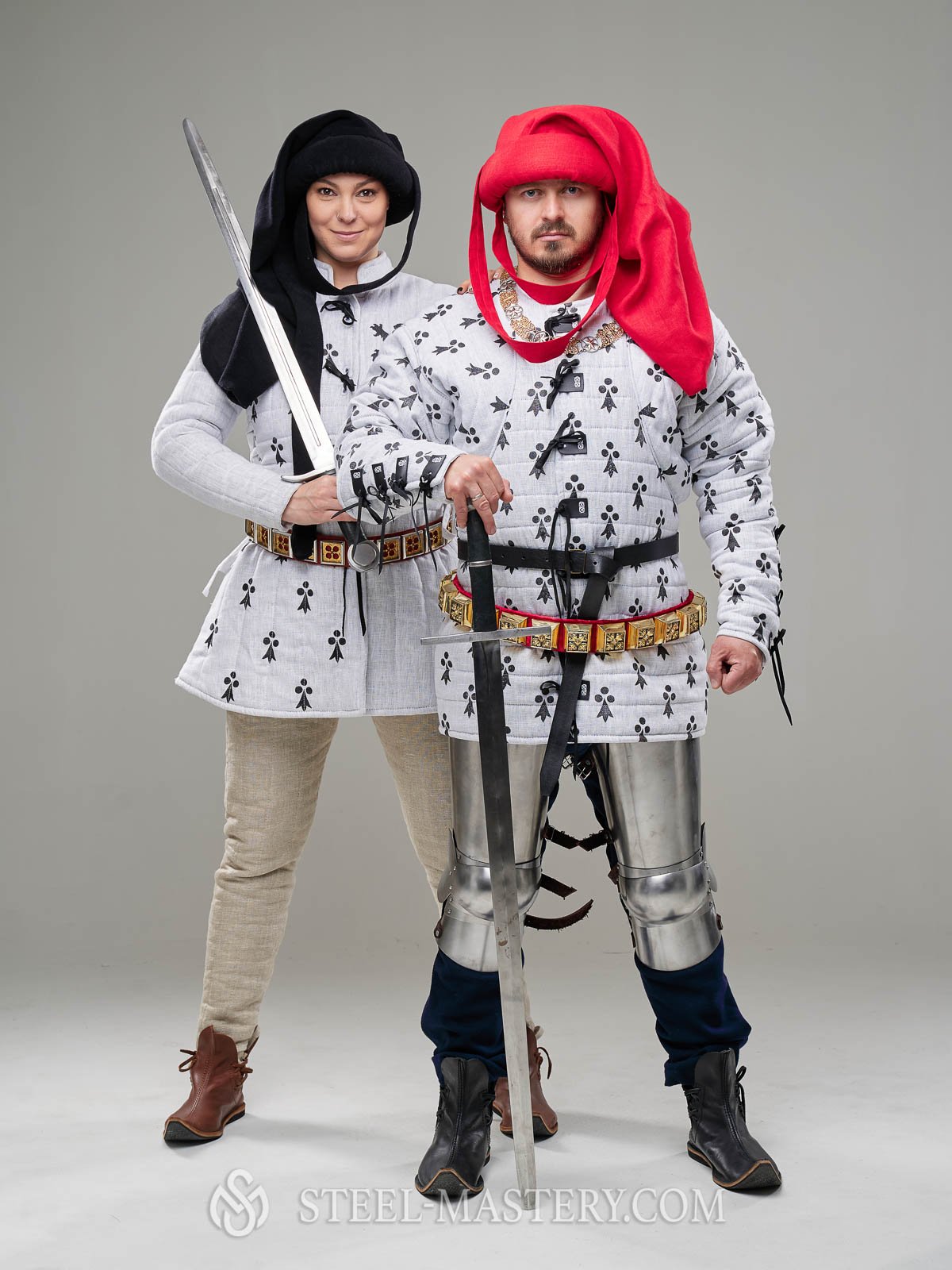