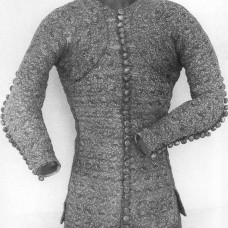 Pourpoint of Charles de Blois – between court armour and dress-coat.

Gambeson is a type of padded medieval military clothing. This article will refer to pourpoint of Charles of Blois, that is an interesting artefact of the Middle Ages, functions of which are not apparent at once. But before to start to talk about pourpoint, we need to make a retrospective journey into the history of padded armour.

The most significant features of gambesons are multipurposeness, cheapness and ease in manufacture. Besides, they were being used in different ways:

1. As an independent armour 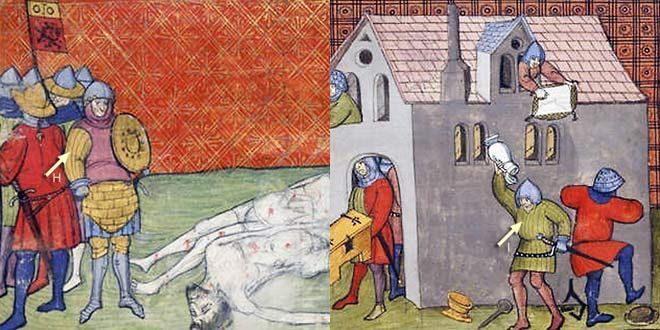 3. Sometimes, as over armour 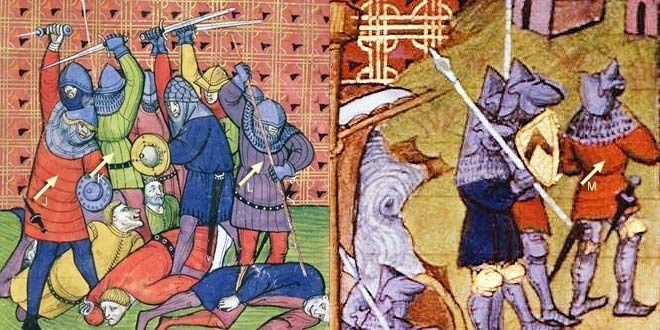 Unlike the leather and metal armour, gambeson is light, comfortable clothing, which protects from cold and moistness on the good level. Besides, there is comprehensible variant even for poor soldiers of fortune. Not every warrior could afford plate or mail armour. But, it was much more easier to obtain few layers of quilted linen and padding of cotton waste or horsehair. Most part of adventurers and gentlemen of fortune were wearing exactly padded armour in the XII-XIV centuries. It is known according to the gravures and written sources. 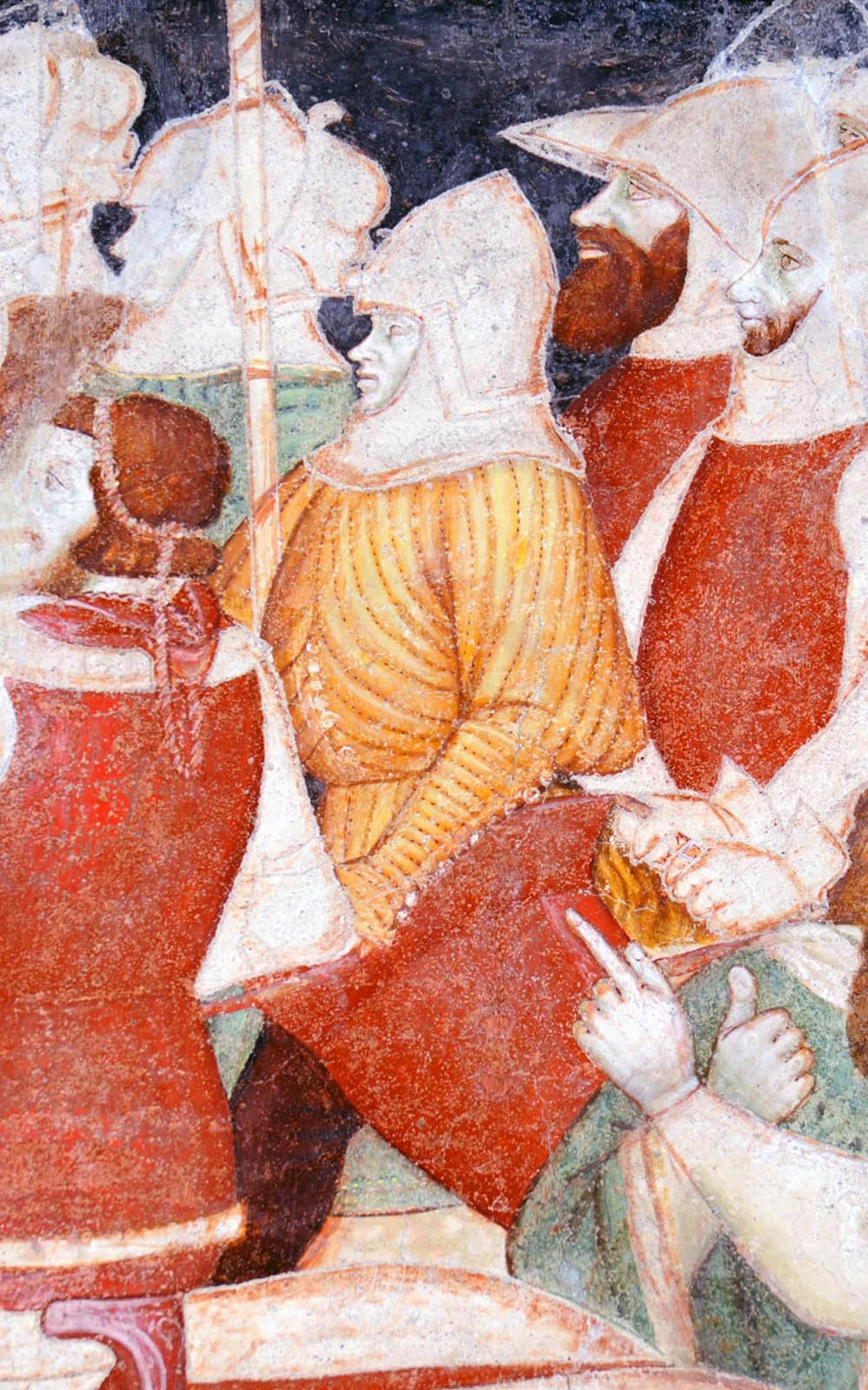 There were multi-layered thick gambesons with mail or plate insets and thinner elegant models that were used as under armour or independent military clothing. A warrior could wear chain mail or plate armour over such gambeson to be ready for a battle in any moment when it was required. Pourpoint of Charles of Blois is exactly such kind of garment. 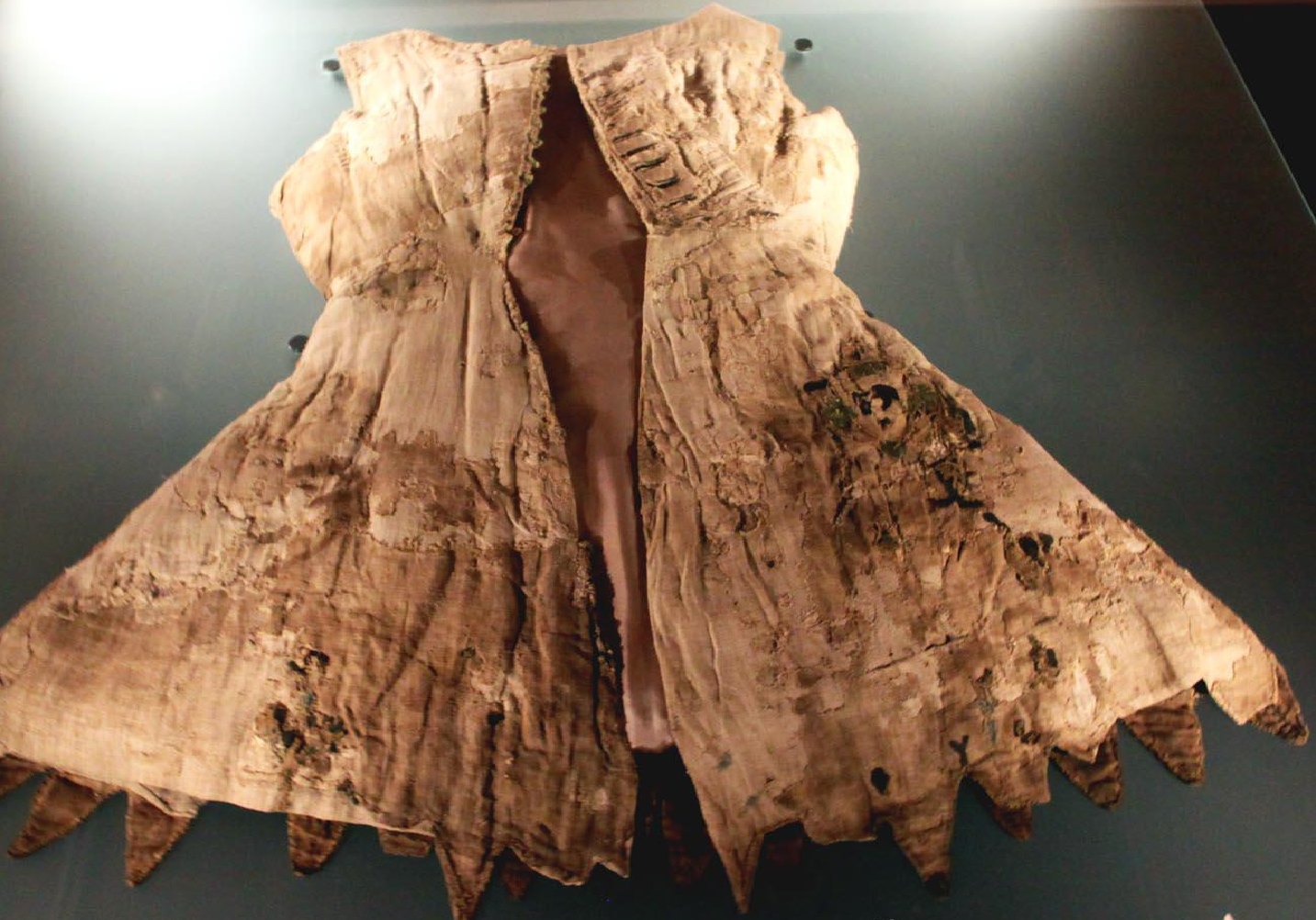 There is an interesting case to wear gambeson over the main armour. If an armour was a high-quality one, so there were no too much sense in using of padded armour, as it increases size and hinders the movements. Thick breast protection with additional insets over the chain mail may provide some benefits. Another variant is protection from cold and direct sunlight. But, the most probable, that over armour protection with decorative embroidery and blazons could be worn to show social status of owner. Anyway, that is another story. 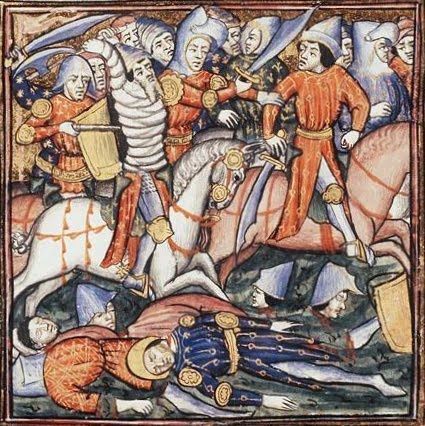 Miniature from Livy “History of Rome”, “Battle of Cannae”, XIV century, National Library of the Netherlands

Pourpoint of Charles is kept in Musee des Tissus et des Arts Decoratif. There is one of few samples of the XIV century, that was preserved in good condition. 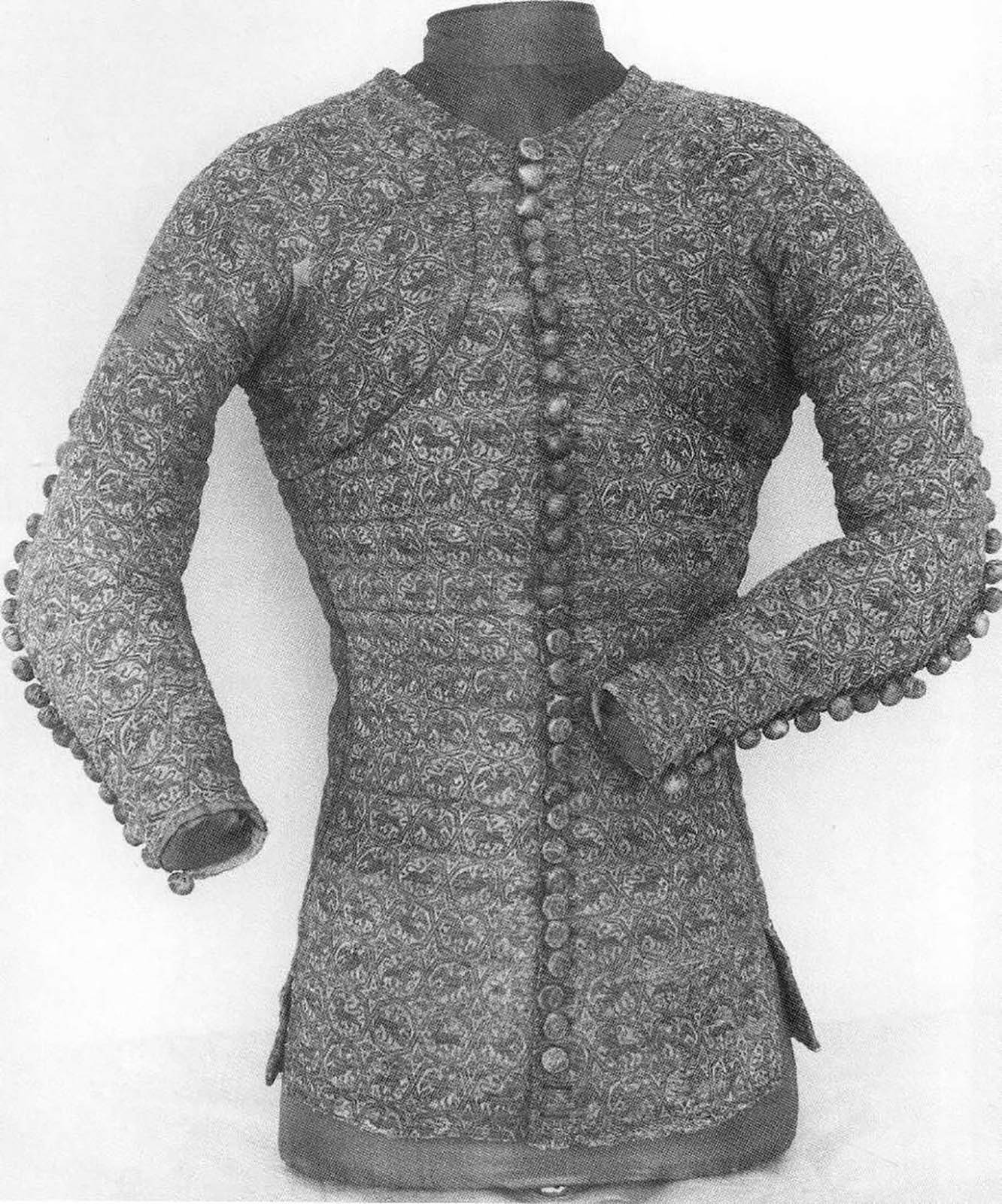 In fact, there was a quilted clothing, stuffed with cotton wadding, but not with horsehair. This tells that such item was not as simple as it seems. Cotton was not growing in Europe these times, so it was import elite material. 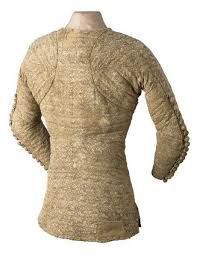 As sleeves, so shoulder parts are quilted circle or semi-circle wise, perpendicular to the length. Such designed was aimed to reinforce softening on the most vulnerable areas of body and do not ot hinder the movements of warrior. Such cut had name “grans assiettes” and it was quite popular in Europe of these times. Grans assiettes was used not only for gambesons, but for cotardie (civil clothing) as well. 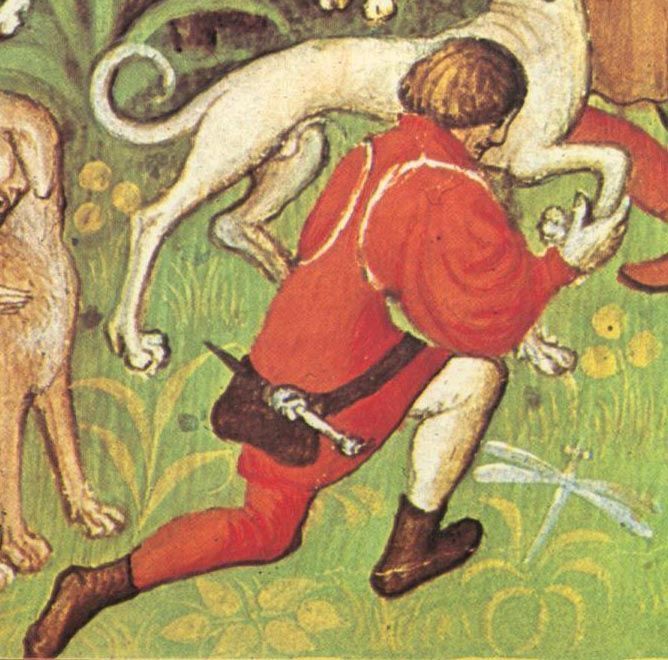 Actually, pourpoint of Charles de Blois has typical cut for that epoch. We can see similar design on many miniatures.

Pourpoint is not too thick, and it does not have any additional fastenings or loops for plate parts of armour. That may mean that it probably was used as military-style outfit, but not as an underarmour. Outer fabric – silk brocade of orange colour suggests the same thing. Such garment was usually not being hidden under armour, but hold up to view. 70 (!) silk buttons with horn insets flesh out general luxury image. Pourpoint was being fastened from the front: it was very convenient for every-day using, but not for battle one.

We could suggest, that pourpoint was worn over the main armour, but it is questionably, as this model is fitted and accentuates a figure .So it would be a nonsense to pull it on the chain mail or plate armour. 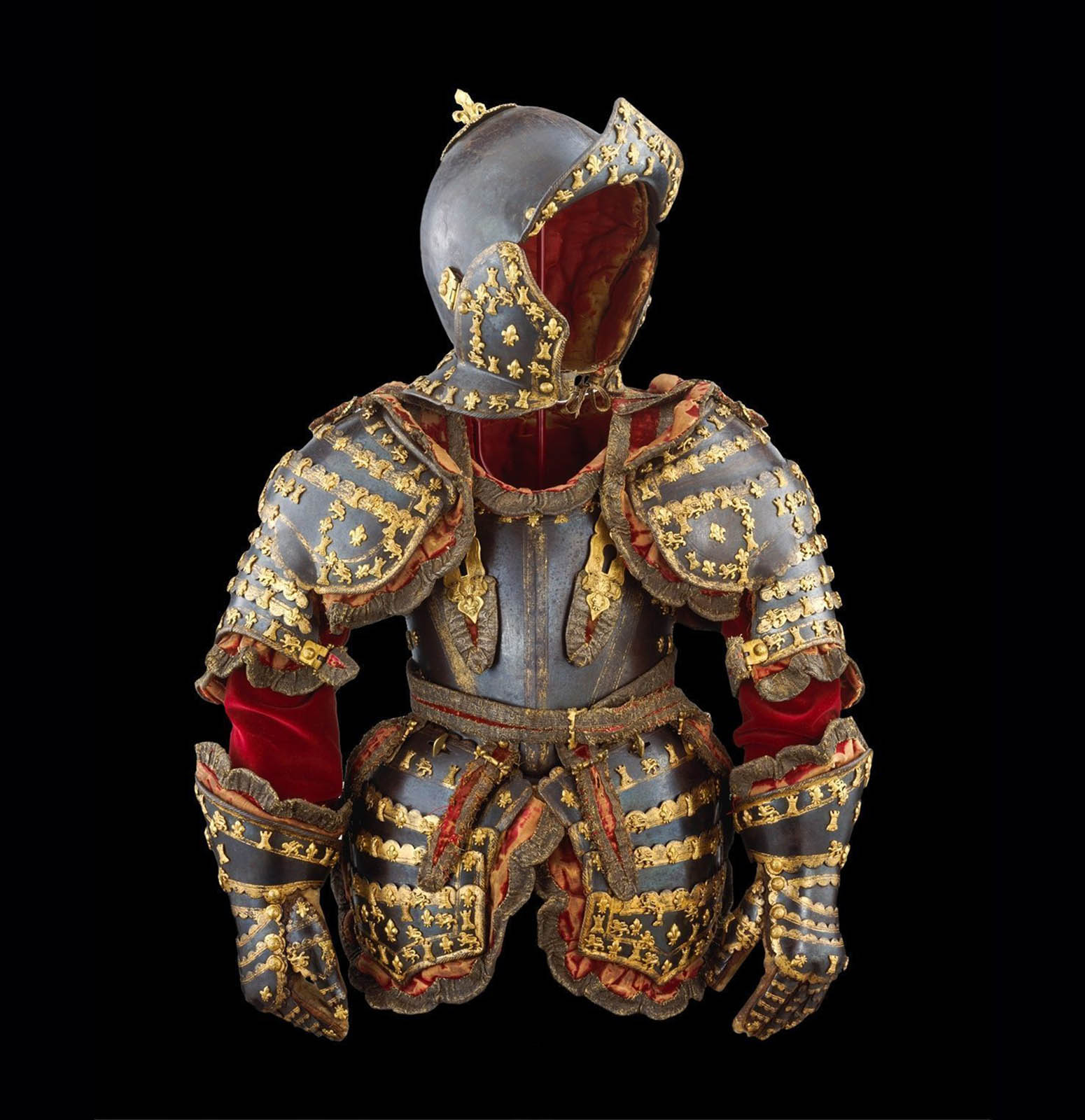 Parade armour of the 5-years old infante Louis, Prince of Asturias (last royal armour that was made in Europe). Circa 1712 year.

To be more accurate, there is an intermedium between parade armour and parade uniform.

Steel Mastery offers you historically correct padded gambeson, which is based on the original pourpoint of Charles de Blois. We will make it for your individual parameters, so be sure, that it will fit you like a glove!

You can see all our models of gambeson here. 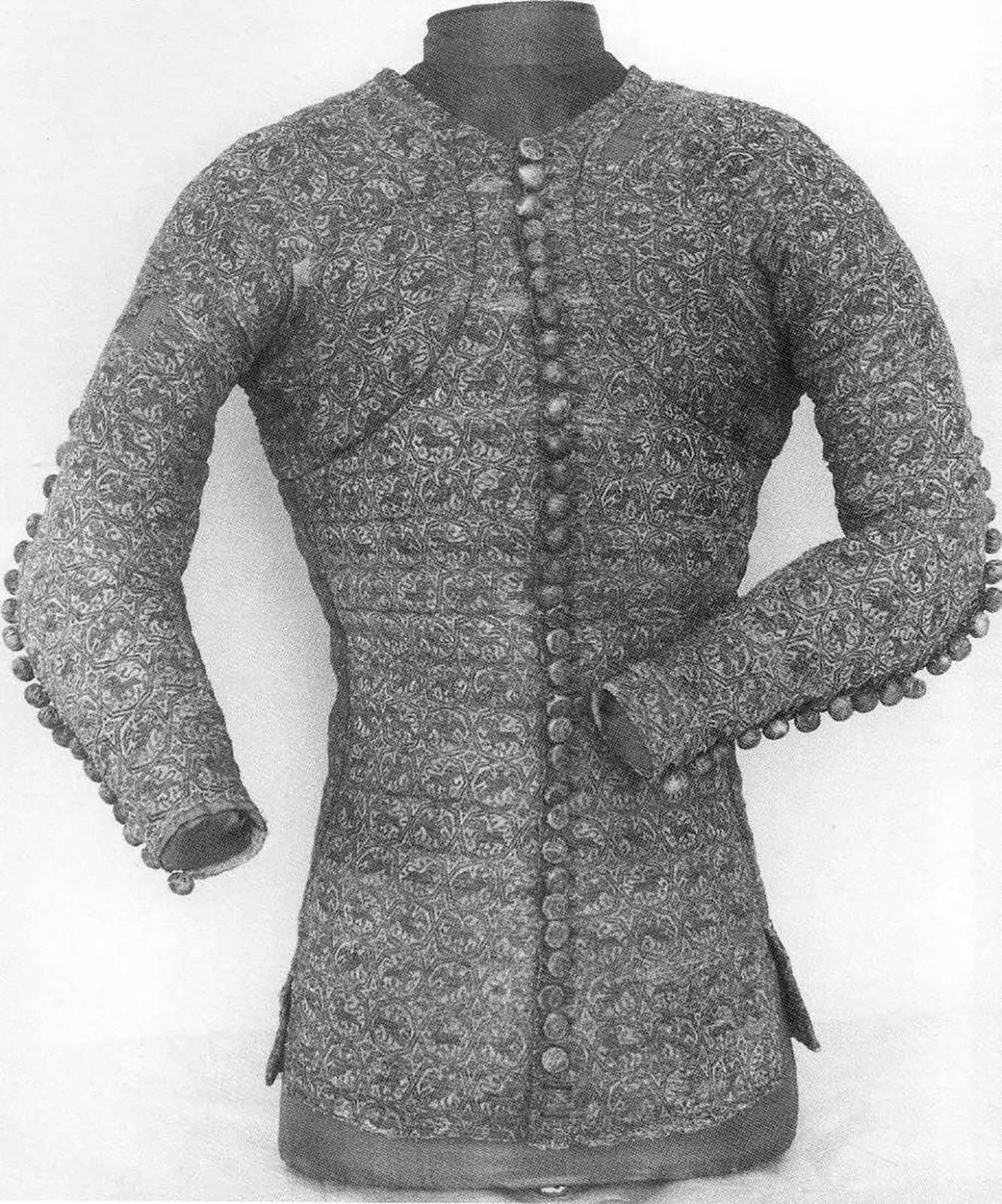