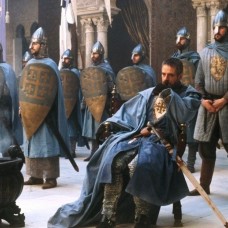 1187 A.D., second crusade, Salah ad-Din’s conquest of Jerusalem, and Hollywood that does not like history. Four in one.

Kill them all. For the Lord knoweth them that are His (с). Hollywood that does not like history. How it was supposed to be, Mess-ups. And finally…

Kill them all. For the Lord knoweth them that are His (с)

The «Kingdom of heaven» series are filled with some truly devilish mistakes, equally in respect of historical issues, armoury or garments. I do agree to leave all historical inconsistencies to Ridley Scott, he might not have read the textbooks, or was just indifferent to whom his characters were and when and how they died. Having said that, I can’t forgive and forget problems with armoury and clothes, so we will be discussing those today.

There are, however, some inconsistencies that I can’t wilfully neglect. The first one is closely connected to the armoury – in particular to angry, very angry knights in white scapulars bearing black crosses. White capes with black crosses… what is so familiar about that? Maybe the Teutonic Order that will be established only in three years’ time after the surrender of Jerusalem to Salah ad-Din, or maybe the Livonian Order that will appear only in 1237 A.D.? Well, who cares, a slight mistake, but the crosses are awesome, aren’t they? We will get back to those fascinating crusades a bit later though. 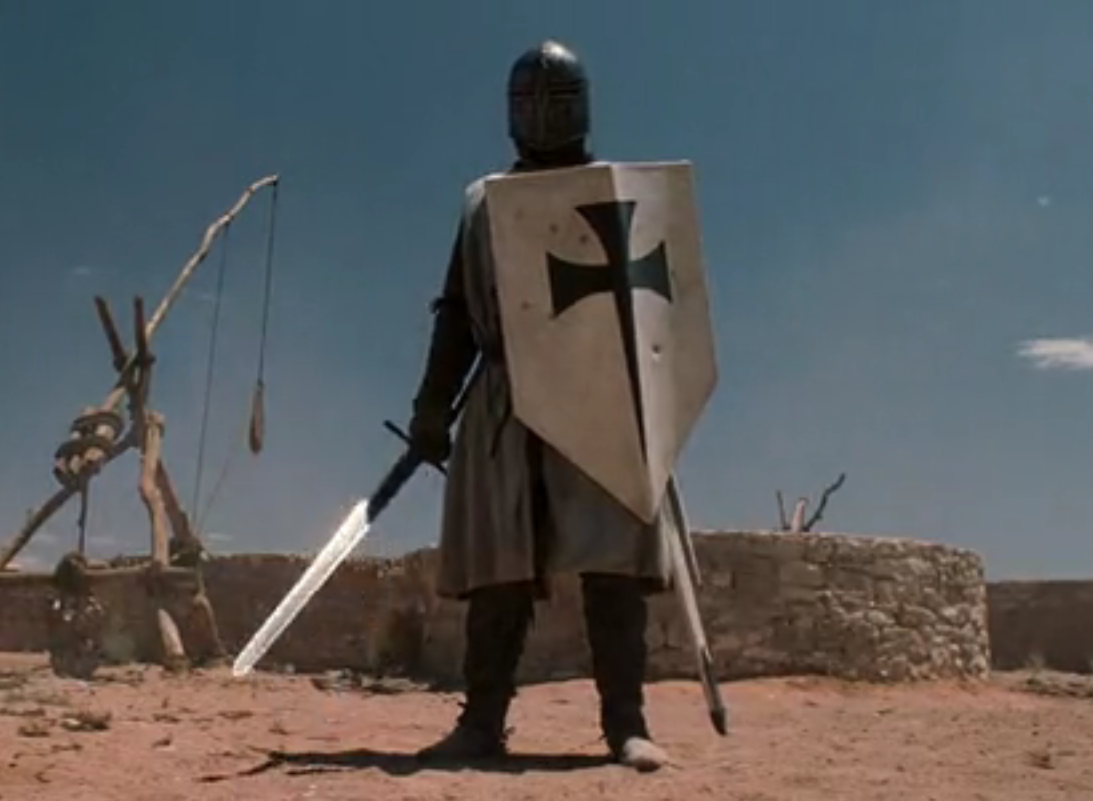 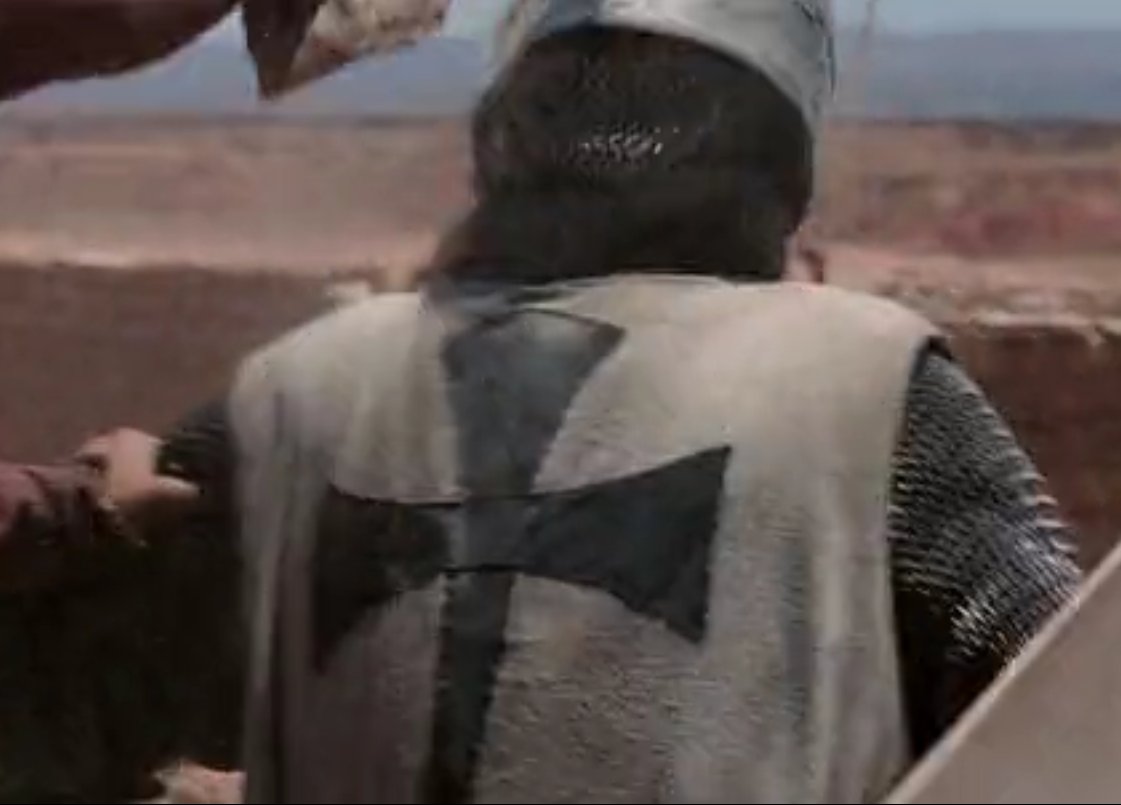 And here comes the second inconsistency – Tiberius. Tiberius, Carl!!! There was actually a Tiberius – one Roman emperor, there was even a Raymond III (count of Tripoli) – councillor to Baldwin V, but there wasn’t a councillor Tiberius. I’m clueless as to why Scott was so unfavourable of Raymond III though. Such a shame, he was a good chap. Good old Raymond wasn’t just some earl, he was no less than a regent of the Jerusalem Kingdom during Baldwin’s IV and Baldwin’s V reign. Overall, he’s absolutely not a character that you’d be ashamed of showing and whom you can neglect.

And, more snippets: the main character was a baron. Not a simple village artisan, but a baron. Of course, baron is no king, but still not the last person in the country. Therefore, he might have been wandering into a forge every so often, but he couldn’t have worked there.

One could probably hold their tongue about the fact that Salah ad-Din’s faithful warriors are praying with their shoes on and without a prayer mat. But the fact that they prayed facing West can’t be silenced.

Oh, and finally, king Baldwin IV (the leprous one) died a year before Jerusalem was taken. And since the zombie version is not quite credible, Scott obviously fantasized a little bit.

How it was supposed to be?

The first impression is that the costume creators tried very hard to match the outfits with reality. There is no armoury shining brighter than sun, no perfectly clean and tailored clothes. It’s dirty, squalid Europe during the time of the Crusades: battered mails, shabby and dirty clothes of dusty colours (only Sybil’s dresses and the capes of the Jerusalem’s warriors are bringing a joyful change). The swords are a bit too slick and beautiful, but the scabbards are believably scruffy.

Although the majority of knights were dressed as they should have been – in chainmail, sometimes there were occasions when their armours bewildered me. All in all, the series contain armour of a wide time range – from the end of XI to the XIV century. And the whole story is set in, mind you, the end of XII century. I can somehow justify things from XI century: chainmail was a luxurious item and was inherited as a valuable possession. Those justifications however do not stand for the outfits that were clearly borrowed from the Vikings. And I do struggle to see the excuse to be using items from the future.

So, below is an outfit of the Templar Knight for the historical period of the film: 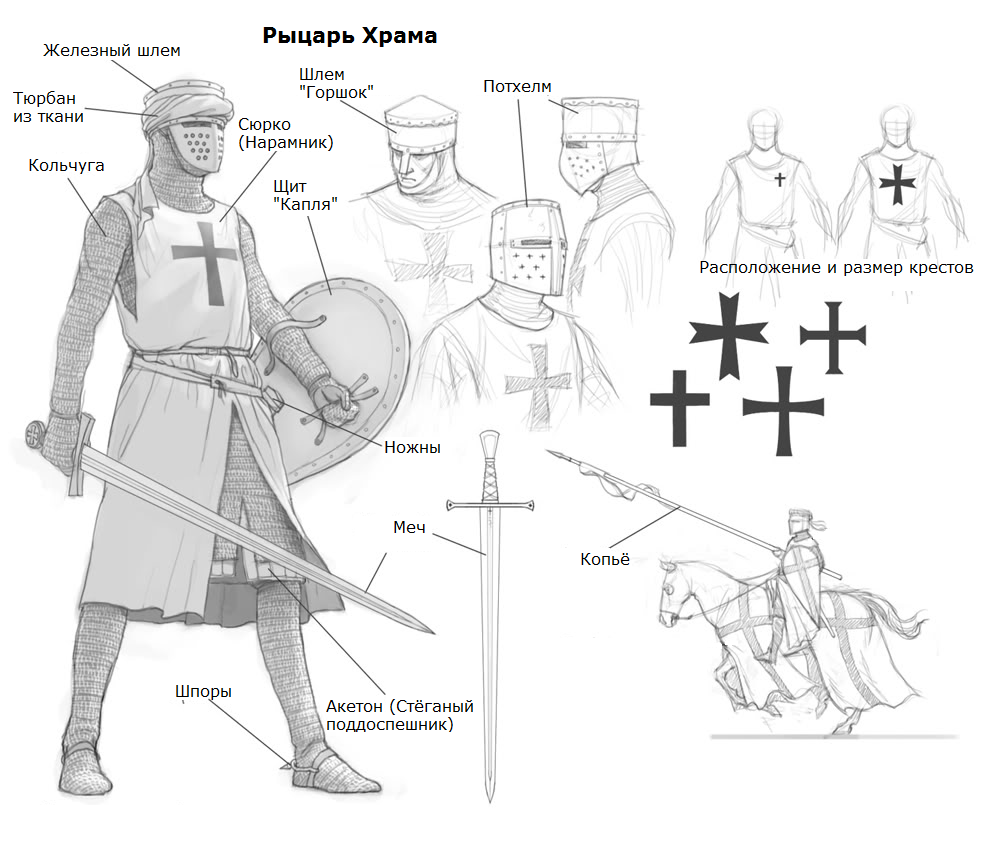 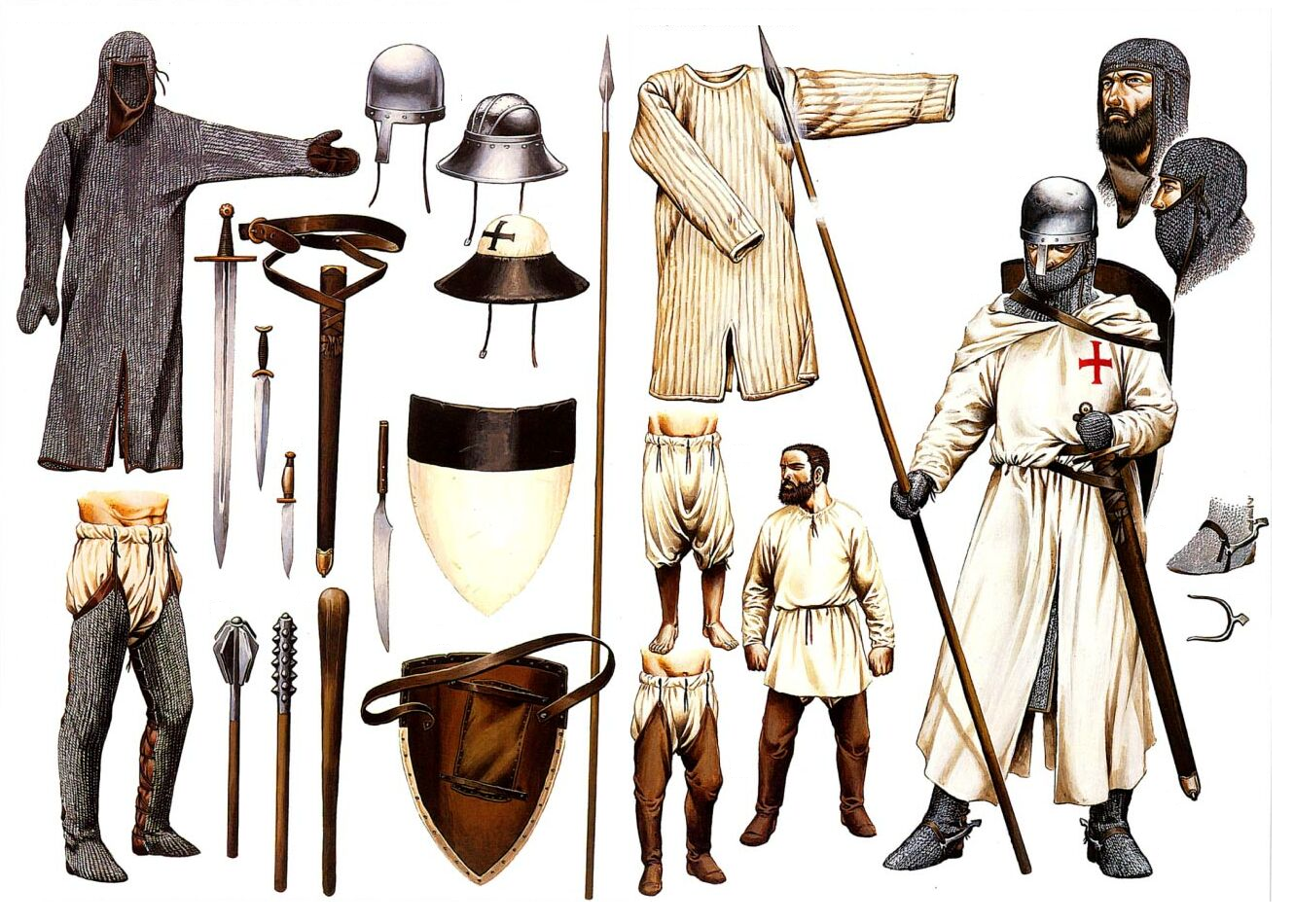 From bottom up, we can see a pair of bottomless underwear, a shirt, fabric stockings, leather stockings, a quilted gambeson, and over all of this – chainmail stockings and a long hooded mail, often with attached mail leather-based gauntlets, and of course a helmet. As a final touch – a scapular, needed not so much for beauty, but to cover the chainmail from burning sun.

Since I have looked at all the Templars’ rags, let’s investigate Sallah ad Din’s army. I am generally a kind and understanding person, so let me show you both armours from the beginning and the end of XII century (well, it could have happened that someone wore his old grand-grandpas’ armour). 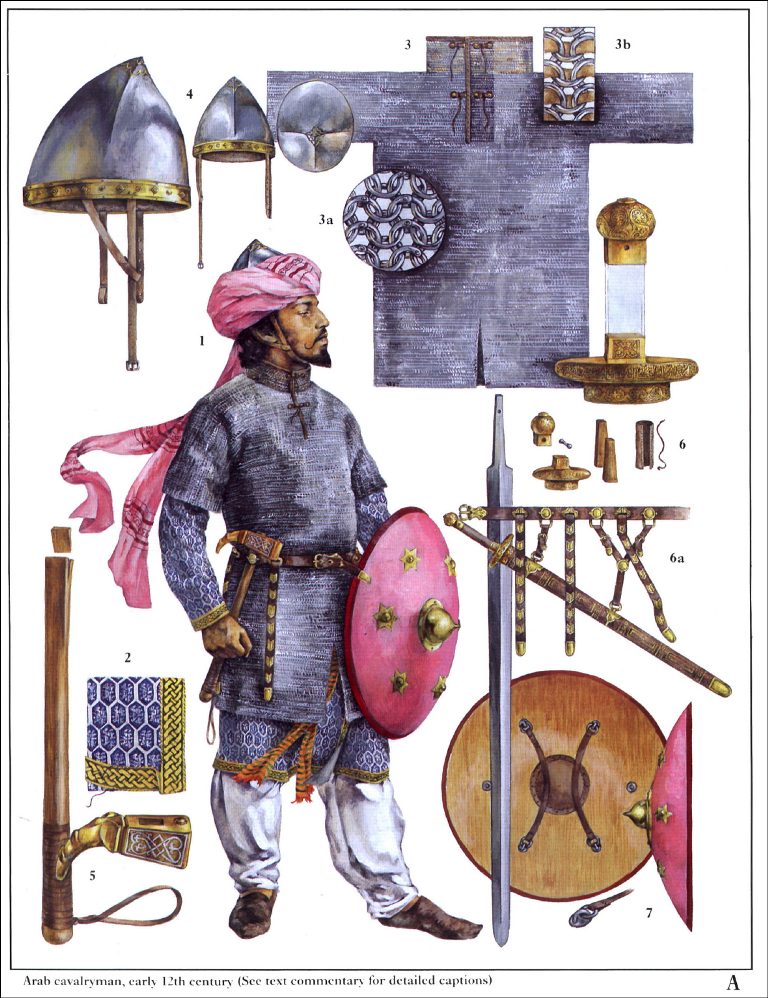 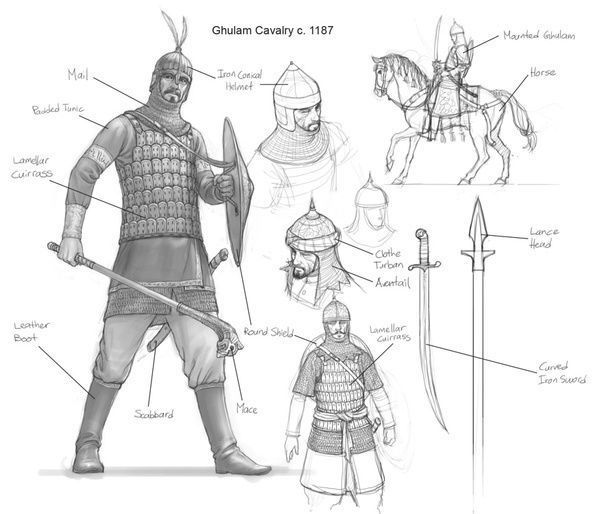 What do we have here? Underwear shirt, top shirt, not too wide trousers, shoes and boots over them. Mail and perhaps another shirt over it and a lamellar armour on top. Turbans, pointed helmets with a mail coif (Persian-Turkish-Muslim helmets circa XII century are supposed to be either without a nose guard at all or with a small and clearly stationary nose guard). Curved sabres, spears and round shields.

What the film’s dressers are rightfully taking pride in – are the proper metallic mails. This is a real breakthrough compared to the metallic-coloured knitwear that appears every so often even in prominent films.

The mails are metallic, yes, but... They didn't want to bother with riveting. By zooming in we can see that the mail, although made of metal, is not riveted, even for royals. 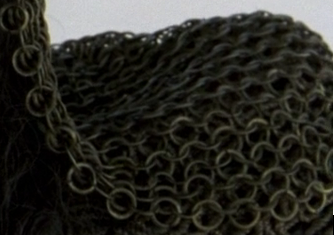 A definite plus is that costume designers learnt what a gambeson is and clothed almost everyone in them.

But the biggest minus were the helmets.

For example, I was really happy to see the knights’ helmet, especially its form and the sliding nose guard, given that it will appear in Asia only towards the end of XVI century.

I felt really sore for Sallah ad-Din, the helmet was put on this great commander’s head without any padding or a turban… What a shame. Oh, I can see a very familiar nose guard as well. And what do we notice in the background? We can definitely see eastern-style helmets, but all of them are again dated from XIV century. Such helmets can be seen on most warriors.

What do we have here? It’s a four-petaled spangenhelm. Evidently borrowed from his great-great grandfather. Or the dressers dragged from the warehouse the very first thing they could find. 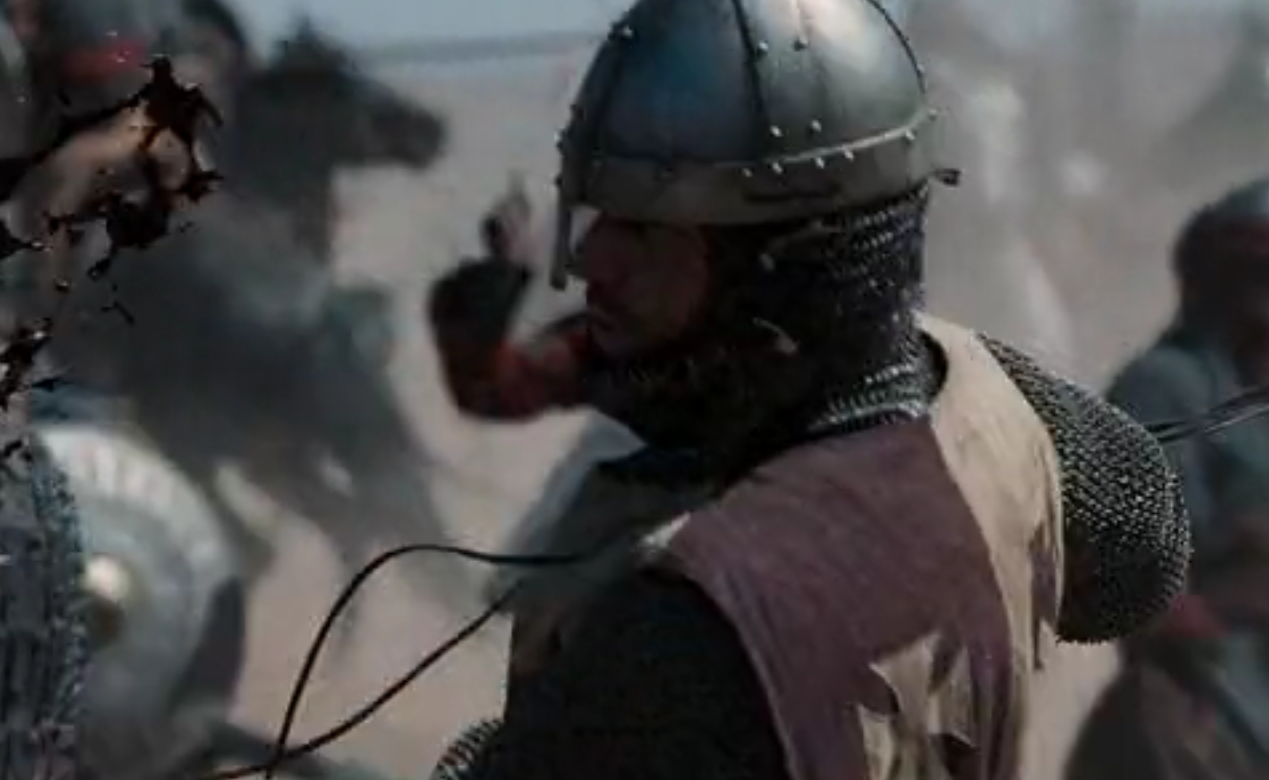 And here we surprisingly see an example of a “sugar loaf”, although such helmet will appear only in the beginning of the 14th century. 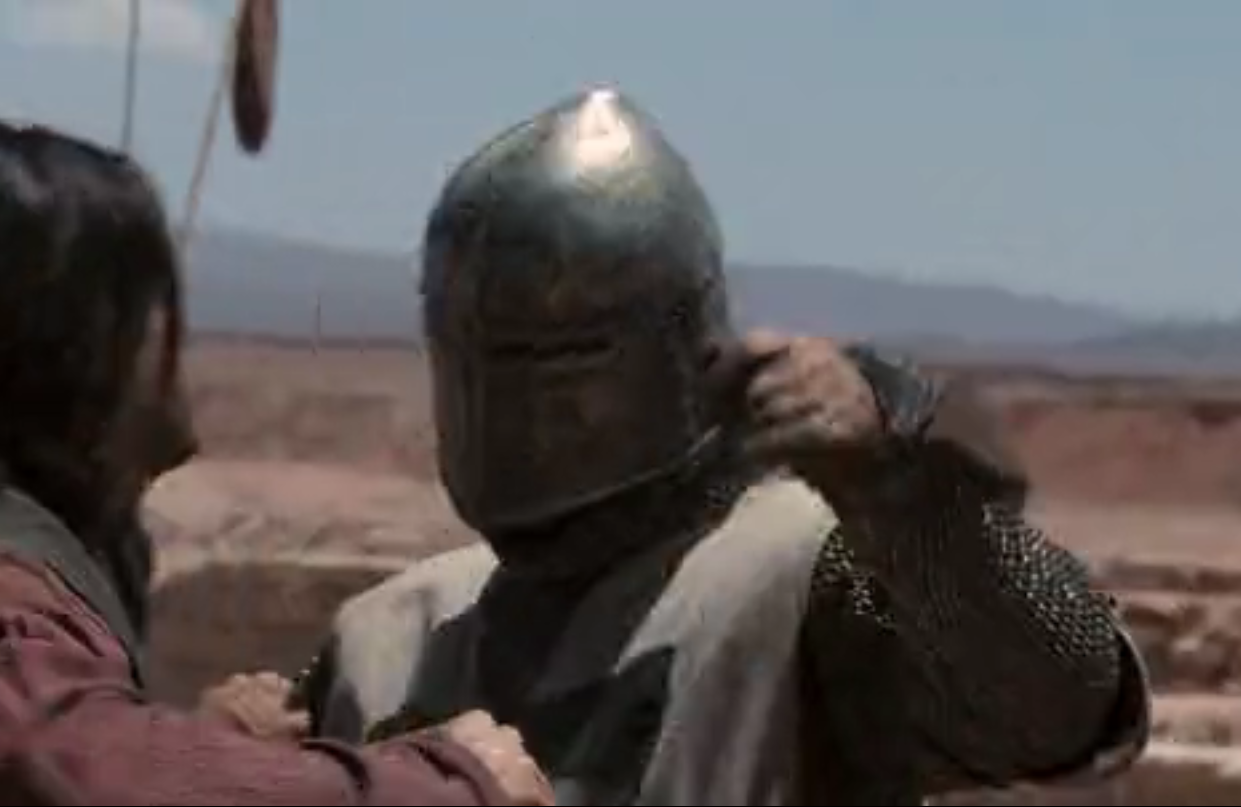 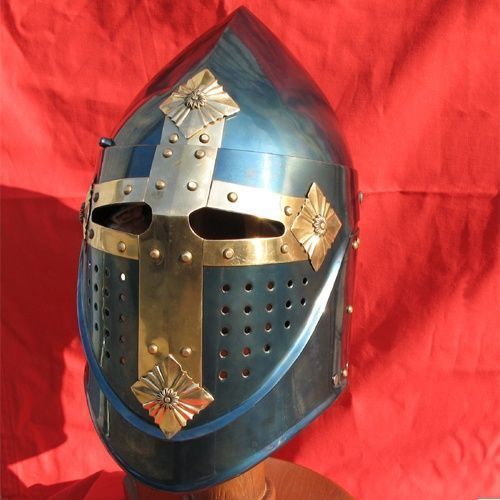 Let’s look down from the helmets and have close look on the footwear. We will see another mistake: 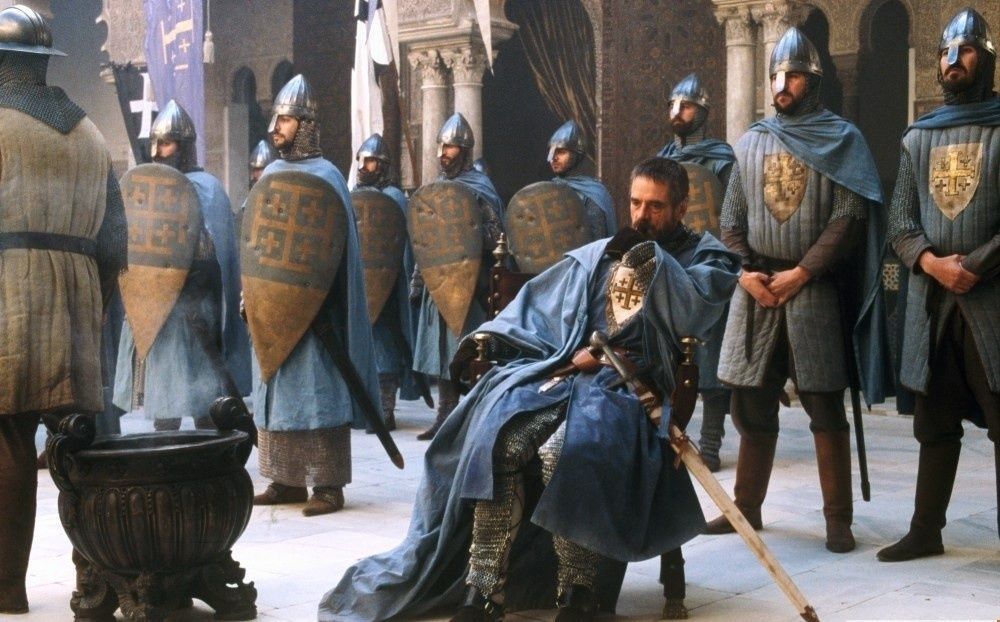 Europeans simply did not have such boots at the time. The footwear industry has not yet developed an idea of a high and hard boot-top.

An overall impression of the film – they really wanted to get it right and they did in fact get a lot of things right. A large volume of historically correct armour pieces is very pleasing, as well as the serious approach towards weapons and attempts to recreate the everyday life of the era. However, the described mistakes are telling me that at times they simply thought “that will do”. Such mistakes eventually piled up and spoiled the whole impression from the movie, otherwise conceived to be a serious and decent project.

The Crusaders’ era is one of the first that people try when they start thinking about “becoming a knight”. It’s facilitated by the actual title of the knight, an idea of a noble warrior with a noble cause, and of course the general romantic fleur that surrounds this topic.

Compared to the XVI century, such joys are much more financially affordable. If you wish to feel like a knight but have no experience, you should start from this era.

All relevant equipment and armoury can easily be found at Steel Mastery! 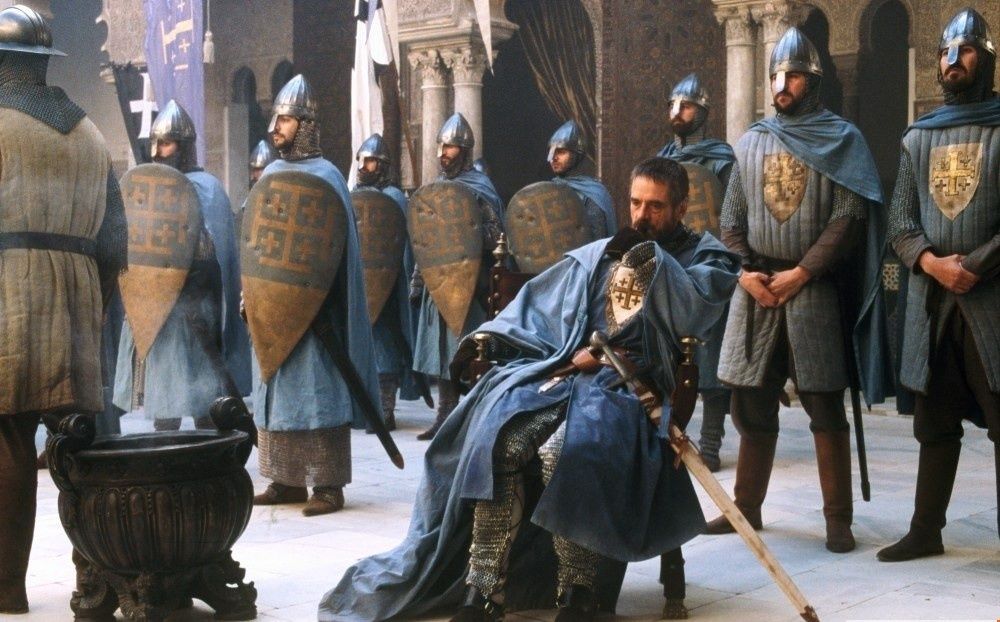