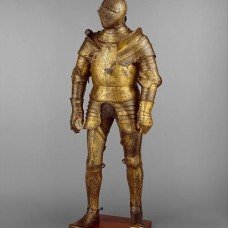 Henry VIII: wives and armour. The first mod of the Kingdom. “The Tudors” series, Amusements. So how do you do it?

Historical period drama has always been popular with the audience. Diving into another era, trying on costumes and armour, imaginary fights and chases with enemies… Exciting, safe and thus popular.  For it to sell well, the product has to be bright, beautiful, catchy and not too expensive and difficult to make. For this very reason it turns out to be completely unrealistic and inaccurate. Few directors and producers are willing to sacrifice time and money for meticulous accuracy of the historical representation. If with costumes they usually use brighter fabrics and bare up more flesh, with armour and weapons they want to make it beautiful and luxurious and keep expenses to the minimum.

The end product comes out to be “historical” films and series - absolutely adored by the audience, but which makes knowledgeable people to shed blood and tears.

Let’s look at the fails in armoury and weapons of some of the most popular period dramas. I’m postponing dealing with the East, antiquities and early Middle Ages.  And quite consciously staying away semi-fantasy films, apart from showing one or two most peculiar pieces of armoury.

We’ll start with the King Henry (‘Blue Beard’) VIII. His armour, ridiculousness and a couple of amusing details.

The first mod of the kingdom

Now then, it is 16th century outside, and the armoury mastery skill almost peaked: so far everything has been invented and tried. Armour has little time left onstage – firearms have been invented, but the armour is still in favour: luxurious and ornate filled with frills, especially when worn by royalty.

And the first place is (of course) taken by the King. His Royal Majesty Henry VIII.

Henry’s combat and tournament armour was extremely luxurious. The King was quite in love with himself and felt that the immaculate perfection of small details, engravings, etching and even sometimes gilding is a bare minimum needed to reflect his glory. Well, he was not a poor man and could afford all those things we see in museums today.

The Kings’ young years: he hasn’t bulked up just yet, but already growing fond of expensive things. Look at this tournament armour. Composite ornamental fretwork, a stunning tonlet faulds simulating a fashionable camisole of that time) worn to make the petty Frenchman (Francis I of France) burn with spite and envy. A kit included special marshal armour – decorated to the same extent.

Gilded plate armour. Actually there is no evidence that it was worn by the King, but historians believe that it was produced by the Greenwich armourers specifically for Henry. After 400 years the gild is a bit scruffy, but the armour is still phenomenal, as apart from gilding the metal has the finest ligature, the details are perfectly forged – true armour of the Lord and the King.

Armour is kept in The Metropolian Museum of Art, New York, USA

Combat armour of the fattened king. No gilding, but with delicate and fine finishing.

And finally, the King’s last campaign and the last combat armour. Blued, with gold and ligatures, it’s not pretentiously fashionable and vulgar anymore.

On the question of armour decoration, I am offering a closer look on the different sets:

Henry had many more sets, but you can get the idea of what the King used to wear.

“The Tudors” is a very expensive and hyped production. Numerous ‘stars’, luxurious interiors, expensive entourage and absolutely ridiculous costumes and armour. I wish I could hold a solemn Inquisition tribunal upon the costumes of this production, but some other time – today is the armour’s turn.

After seeing the proper King’s armour, one cannot help but get amazed by the lop-eared ‘tudor’ Henry’s vestments. I do understand that no production (even an expensive one) would spend the same money on armour that the King used to back in the day. But in the series there is no requirement for the armour to protect the body. It has to be beautiful and match the era, but “The Tudors” creators failed even such a simple task. Moreover, all but one pieces of armour do not match the actors’ sizes. Not a single one.

Firstly – a tournament set. Not a combat one, but the tournament set, the one he uses to show off to the ladies of the court and his second wife-to-be. The armour is either his grand-grandpas’ of might be even from the times of early Crusades. The helmet looks most like a Norman, with a lifting ‘owl’ visor. All this splendor is miraculously made either from aluminum or even out of plastic (looks much like plastic, but the actors sworn it was aluminum), not even set to fit, missing all decorations apart from a painted lily on the chest and little gold-painted circles meant to imitate rivets. And no, you are not delusional – it only imitates the plates.

A shirt, doublet, padded armour? To hell with that! I am the King and I am too cool for such trivia. On the other hand, if it’s knitted chainmail, why not?

Lo and behold, a rich royal battle armour. At least the plates are real, but the guys decided not to bother with complex engravings or etchings and merely attached brass “braids” to the armour. What’s more, they riveted them in quite a sloppy manner and spared the rivets. And the King’s lack of padding is also looking a bit odd.

And here is another character from different series, in the same armour with the same braids. But here they were generous enough to provide him with a jacket.

Right and left spaulders are different and are sometimes switched places.

Get ready to kneel before the gloriously rich royal armour: knitted armour, cotte d’arme and plate “arms and shoulders”, our old friends. With the cotte d’arme all this quite resembles Henry V image at the Battle of Agincourt (1415), apart from the spaulders. Let’s assume it is respecting the memory of a great person. Original, not typical.

Breastplate? Why would we need one, if we have a rich cotte d’arme. Aluminum (plastic?) against mere steel is a truly royal decision, coated in silver paint.

But the bracers, gloves and coif are made of gold! The crown (might be made from aluminum, but really looks like plastic) and the belt are a bit shabby, but silverfish wasn’t cheap back in the day either. The absence of any fixation on the arm will be tactfully omitted.

Let’s leave Henry alone and move onto his closest friend, Charles Brandon, the Duke of Suffolk: a man only slightly poorer that Henry and just as vain.

The series treat us to 3 armours of the Duke of Suffolk: poor, rich and extremely rich.

Remarkable aluminum (plastic?) forging, combined with mail… Although, only a pelerine is chained, everything below that is silver-painted knitting. Where have we seen something similar? Ah, the King wore that.

Here we can clearly see poor Charlie’s cracked and silver-tinted spaulder. Looks like Charlie was put in this armour after the King’s participation in the tournament. It was then (for the King again) slightly fixed and painted. This photo also clearly shows that the chainmail is a generic butted one, while at the time it could only be riveted. Enough about the poor version, though, let’s have a look at the rich, decorated one: it’s overall correct (excluding the helmet), beautiful and striped. It was obviously inspired by the Armour with lions (this armour was plagiarized in the Game of Thrones in a much better quality), Henry Hastings’ armour and George Clifford’s armour. But… Where is the leg protection? Oh, who needs those goddamn legs anyway? An accidental spear injury, or getting pinned down by a horse? Not worth mentioning!

But let’s forget about this piece’s obvious problems and have a look at the helmet in greater detail. We will see that the helmet’s bevor is held by… 2 pieces of string! My my, innovation in the science of forging!

And finally, a very rich armour set. Very rich and completely fantasy-like. Medieval Batman’s armour, if to judge by the wings on the shoulders. The finishing makes one think about a distraught prop guy with a soldering-iron and a bad of metal rubbish. Chainmail is traditionally knitted.

Henry’s horned helmet, given to him by the Emperor of the Holy Roman Empire Maximillian I. It’s interesting that awed be the armour set that included the present helmet, Henry ordered to open the royal forges in Greenwich.

I am having difficulties even describing the next Henry’s helmet, a gift from Maximillian I (it seems like Max was quite an entertainer and liked to make fun of the young English colleague).

Not only Henry respected beautiful armoury, he was also in favour of firearms – this was the reason armourers made a firearms shield exclusively for him.

So how do you do it?

If you want to try on the role of a knight and not embarrass yourself over it (unlike the creators of “The Tudors”), then you can order accurate, steel and truly protective armours of any era at Steel Mastery:

If you want something custom made or what miss on ur web-site, please send photo of the wished model to [email protected] and we will craft it for you! 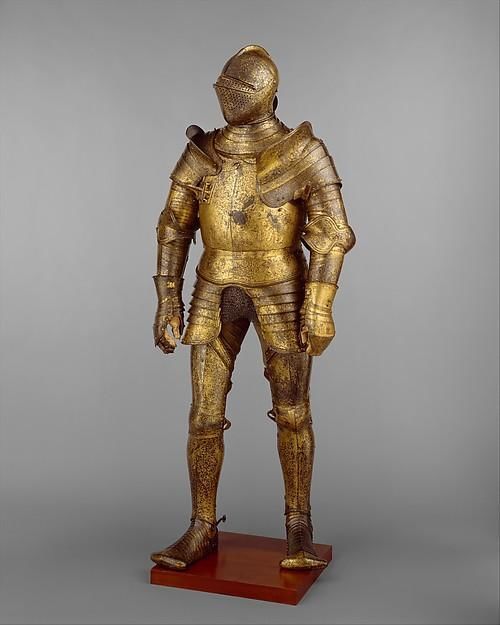