Сompeting city-states of Ancient Greece, Greco-Persian Wars, the Peloponnesian War, other warfares on Greece territory stimulated rapid development of armor and, especially, hear armor. Greek helmets are one of generous gifts left to us by Antiquity. Unique and original, even today they are reflected in popular culture and art.
Name Price Rating New

Hoplite helmet is a type of the ancient Greek Helmet and refers to Corinthian. This head protection was widespread in the VI-V centuries B.C. and was named after the place of Corinth, where the manufacture of such helmets was developed. Corinthian helms gained the most popularity in the V century B.C. in the Greco-Persian wars. Sparta warriors were using this closed head armor as well. Main feature of the Corinthian Helmet is a full protection around the perimeter of head. Thus way, warrior had the protected head and face and eye and mouth slits. Helmet is solid and does not have movable parts. Corinthian helmet from the tomb of Denda from a Greek workshop in South Italy, 5...

Greek style fantasy helmet with spikes is a great head armor for LARP or fantasy event. Design of battle helm is based on the original Corinthian helmet, which was in use among ancient Greek and Sparta warriors in the VI-V B.C. Helmet is made of several riveted parts. It can serve not only as a good protection in role-playing games, but also create the desired character of harsh warrior. Functional head armor has nasal guard and a plate that covers chin. Spikes are customizable decoration and may be ordered for additional costs. You can use this medieval steel armor for: SCA HEMA Larp Stage performances Medieval festivals Reenactment events Main photo shows ...

About Greek and Roman helmets

Сompeting city-states of Ancient Greece, Greco-Persian Wars, the Peloponnesian War, other warfares on Greece territory stimulated rapid development of armor and, especially, hear armor. Greek helmets are one of generous gifts left to us by Antiquity. Unique and original, even today they are reflected in popular culture and art.

And we want to tell you about the most popular types:

This head armor was made by attaching ivory from boar's tusks to its leather base while padding it with felt placed in rows. Actually, it’s doubtful that it provides as good protection as a metal head-piece but it may be worn as a status symbol. We can see a description of Odysseus’ boar's tusk helmet in Book Ten of Homer's Iliad.

These head-pieces were used in the Mycenaean world during XVIIth century BC - Xth century BC.

When speaking of Greek helmets, we usually mean Corinthian or hoplite ones. Why? Because we see them in most ancient pictures and sculptures. Even movies as well as cartoons prefer picturing this Greek bronze head armor among others.

What do we know about it? Corinthian helmet originated in the city-state of Corinth in the VIIIth century BC being named after city’s name.

Generally, it’s considered to be the first Greek helmet, based on archeological evidence. Moreover, Corinthian helmets adorn more sculptures and pottery than any other head armor ever.

Made from a single piece of bronze, it was personalised for each warrior. As you can easily see, its features were:

That is why hoplite head-piece was modified and upgraded to be more effective.

It went out of favour in Greece in the Vth century BC but was still popular elsewhere, particularly in Italy. Moreover, it was used for centuries while constantly changing till the mid-Roman Republican times.

Interesting fact – as we well know from various images/sculptures, soldiers famously wore these head-pieces outside battles tilted backwards. Later, fashion shifted to an Apulian-Corinthian helmet, no longer pulled over one’s face but worn cap-like. It retains, however, a nose guard together with what appears to be eye slits as mere decorative elements. Besides, Corinthian helm was often decorated with a long horsehair tail.

* Even Magneto and Mandalorians are wearing Corinthian helmets, what more do we need to say? Speaking of which, we can make a personal copy for you. ;)

It was a roughly conical shaped open-faced head armor. Sometimes it had extensions at both sides to protect one’s cheeks or a crest-holder on top. It was made of bronze, sometimes of several pieces. It was in use before VIII century BC.

Illyrian helmets originated from the Peloponnese around the VIIth century BC. Its name comes from Illyria where a vast number of early findings come from. It is an evolution of Kegel type one – a bronze head-piece made of two pieces joined together at the crown. Extra protection was provided by ridges running along both sides of the seam plus armor covered an entire head together with neck in its later variations. It provided a good vision, but early versions hampered hearing.

Top fashion Greek soldier head armor in the IVth - Vth centuries BC is a Chalcidian one. It is named after Euboean city of Chalcis where there a lot of pottery was found with its depiction.

It is a hearing- plus vision-improved model of Corinthian helmet, lighter while less bulky. It has a bronze hemispherical dome with a small nasal bar, a neck guard, pair of cheek pieces with ears loop on either side.

Later it transformed into an Attic Helmet (Chalcidian helmet sub-type). Interestingly, Chalcidian type head-piece wasn’t used in Greece itself, only in its colonies in Southern Italy.

These Greek spartan head-pieces replicate felt conical travelling hat – Pilos – used throughout Ancient Greece. Main difference is that Pilos helmet was made of bronze ;) It could be worn over Pilos hat.

Some historians suggest that Pilos helmet was used by Spartan army from the Vth century BC till the end of the Classical era. However, keep in mind that historians/archaeologists still have no convincing evidence, only assumptions.

It was much cheaper while easier to manufacture than other ones – it needed less bronze and work. Besides, it was convenient for wearer's senses of vision/hearing.

Also known as Thracian, it appeared during Vth century BC in Classical Greece. It was widely used in Thrace, Dacia, Italy, Hellenistic world until it successfully reached Roman Empire. Just like Pilos helmet, it got its name due to its resemblance to respective cap, this time – Phrygian.

Phrygian helmets were made of bronze. Very common dome's form drew out into a peak in its front to protect one’s face from downward blows. Large cheekpieces made separately from the dome protected face from both sides. Some variants had really large cheekpieces merging in the centre with a gap for nose and eyes.

It’s another one hat-originated Greek helmet in our collection. This time – petasos – Boeotian variant of Greek felt sunhat.

It was an open head-piece especially favored by cavalry because of its great visibility. It was so popular that it was also used also by the Romans until the end of the Republic. Dome surrounded by a wide, flaring, down-sloping brim was beaten from a single sheet of bronze.

Exactly this Beotian helmet may have belonged to one of Alexander the Great's cavalrymen.

It was a conical Macedonian head armor of Hellenistic era, also known as Pilos-Boeotian, Boeotian-Attic, Late Boeotian, Attic-Pilos-Boeotian. It developed from Pilos helmet having identical shape but had some features of Boeotian as well as Attic helmets. Pilos helm was worn under Konos one as an interior head-piece. This metal head-piece had a small visor and hanging ear guards. It could have specific decoration often containing crown tapering to a pointed apex with spike with broad rim and the front molded with a contoured triangle scrolling to stylized volutes at either side.

This Greek helmet was used by Greek as well as Roman cavalry and infantry from Vth BC during late classical and Hellenistic periods.

Do you want one? We will be happy to craft it for you! Just look at cool Hoplite Helmet made by Steel Mastery’s blacksmiths. We are proud of this replica of Corinthian helmet from the tomb of Denda from a Greek workshop in South Italy, 500–490 B.C. Perhaps you want a fantasy one? We’ve already got it – Greek style fantasy helmet for LARP or fantasy events.

Remember – we always provide great quality products! You’ll enjoy them for a long time and probably pass them to your descendants :)

Just write to us at [email protected] and our blacksmiths with over 15 years of experience will forge any cool Greek helmet for your joy. 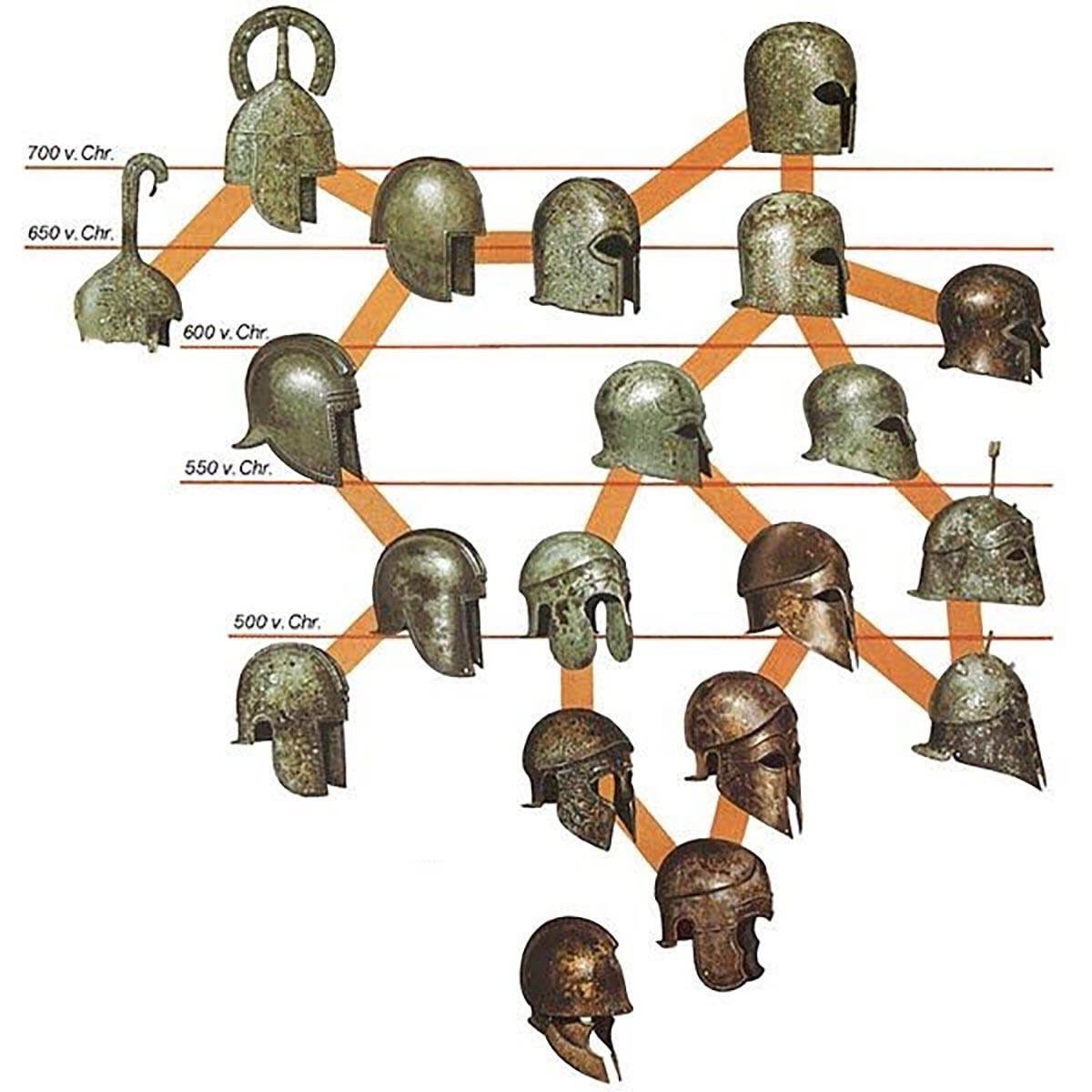 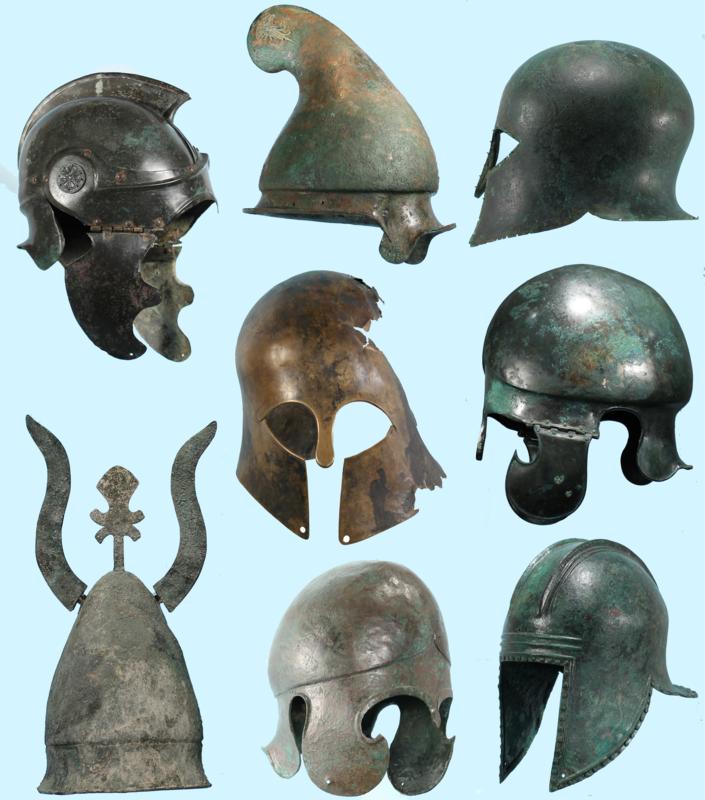 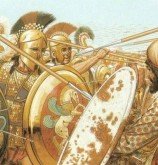