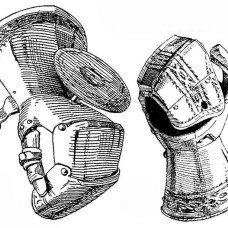 Not so long time ago we showed you how Steel Mastery’s craftsmen make knight gauntlets of the XIV-XV centuries. And this model is one of the great quantity of middle-age hands’ protection. In this article we’d like to tell you, how this type of armour were progressing.

Up to the XI century, success of armourers in manufacture of hand protection was insignificant, so mostly hands defence have been ignored. By the end of the early Middle Ages, they began to pay more careful attention to the protection of this body part. The reason was a high injury risk, as enemy’s weapon defeats the hands firstly, and then – the other parts. To avoid cuts on the fingers, palms, hands, wrist or their total loss, medieval warriors begin to go in for the creation of more reliable hands’ protection. 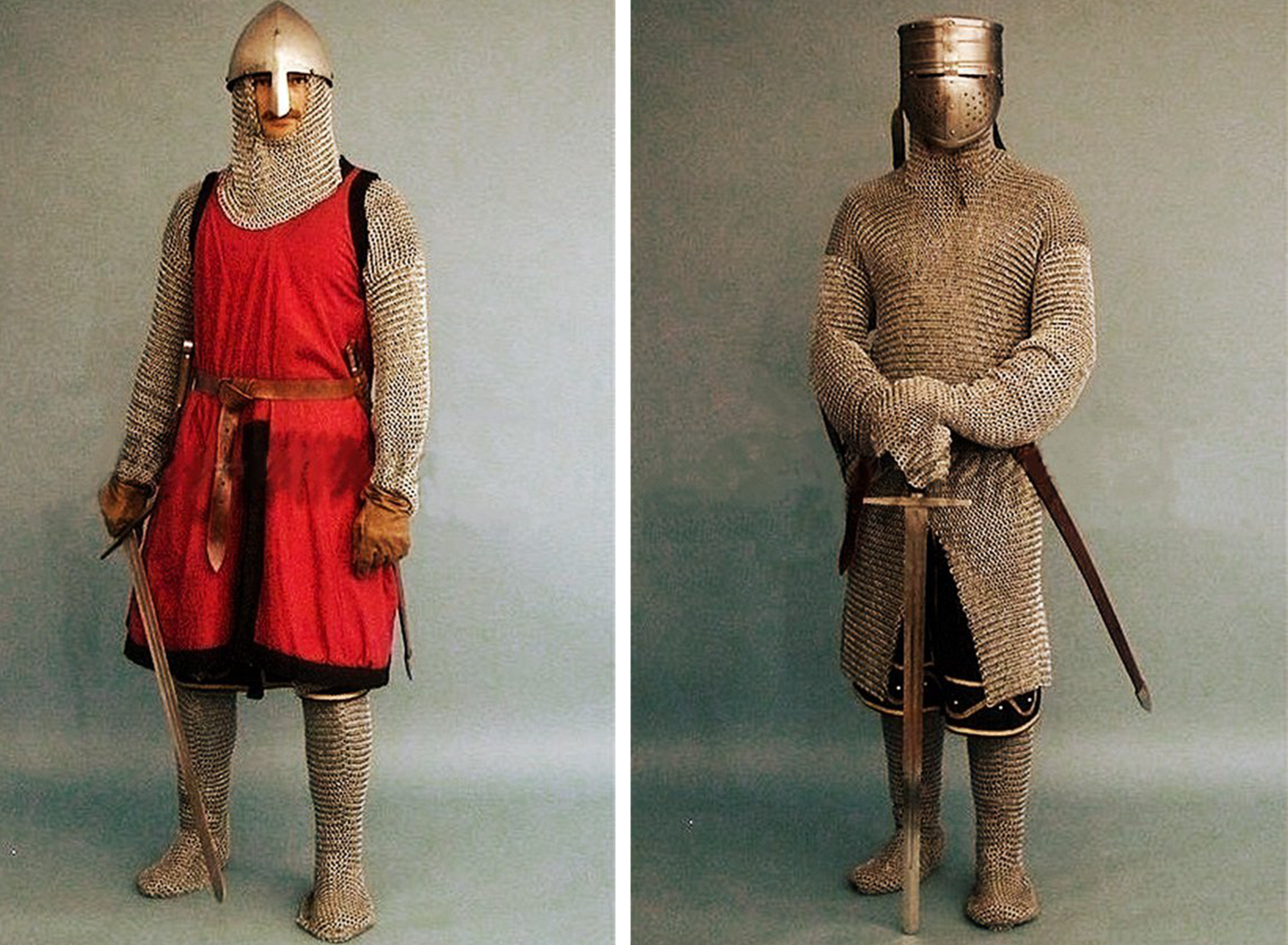 Leather gauntlets (from the left) and muffers (from the right) as elements of warrior’s garment of the  XII-XII century.

From the 2nd part of XI century, gauntlets of thick leather were put into practise. Wristbands were a differential characteristic of the leather gauntlets. Gauntlets of tannage were integral part of mail armour. Despite of the rather unreliable protection, tannage is actively used as basis for hand protection, as the leather provides with flexibility and allows to hold weapon tight.

Series of miniature paintings in Codex Balduineus suggests the usage of leather gauntlets as hands’ protection up to the middle of the XVI century.

Mail gauntlets had been attached to the sleeves of hauberk and was a peculiarity of knights during XII-XIII centuries. Muffers were more reliable hand protection, than tannage gauntlets. However, despite of leather base for gauntlets was popular and was being used for palm protection, it did not make gauntlets’ protective properties more effective, especially in case of serious injuries. 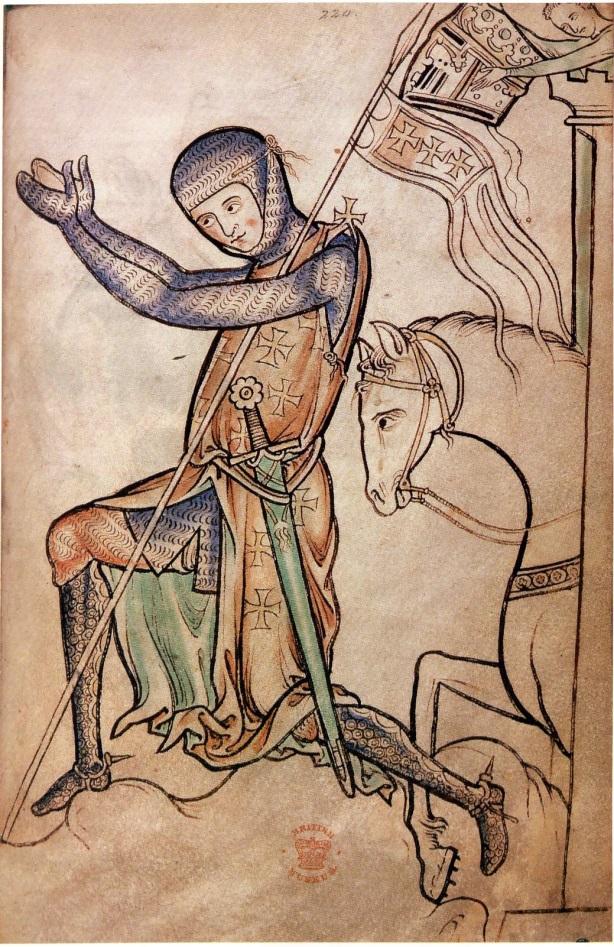 In the 2nd part of XIII century, an alternative to baggy mail gauntlet has appeared. So called “gagnepain” had outer side enforced with metal plates. Gauntlets of high firmness buckskin were prevailing in France and Italy in XIII century as well. During the battle, an additional leather strap were put on such gauntlets. It covered arm from the fingers’ bent to the elbow and was fastened on the inner side of arm.

To enforce protective effect of such gauntlet, warriors covered wrist part and the first knuckle joint of thumb with metal plates, that were sewn over the leather, and then were fastened to the gauntlets with leather strings. Wendelin Boeheim, the weaponologist, considers that “an example of safety discs on the stand” can be traced in the type of  wrist protection with round metal plates, that had being used on the metal gauntlets till the early XVI century.

Together with “gagnepain”, plate mitten gauntlets with whalebone as base have come into use from the 2nd part of the XIII century. For the moment, the exact construction of such mitten gauntlets is not known. In all probability, this type of protection had a form of the usual gauntlets covered with scales of whalebone.

2 - Painting of mitten gauntlet, manuscript "The Life of Saint Denis" (the National Library of France, Paris).

3 - Scaled gauntlets from brass of Sir Richard de Burlingthorpe, circa 1310.

4 - Metal gauntlets, brass of a knight of the Eresby family, circa 1410 (Spilsby Church, Lincolnshire).

Further, metal mitten gauntlets came into general use by knights in the end of the XIII century. Iron plates had being attached to the fabric base or fixed between two layers of fabric. To prevent the oxidation process, a coat of copper or tinning had being applied on the iron plates. It was a necessity, as there were no possibility to remove and polish the plates. A gauntlet, that consisted of a large amount of metal parts attached to the leather base, is called “brigandine”.

Few great finds of brigandine gauntlets had been founded out in Sweden near Visby, that is placed on the island Gotland. Quantity of parts are varied from 22 to 106 pieces (without rivets).  Metal plates has being attached under elastic base (leather or fabric) either over flexible bottom.  Also, “mixed” types of gauntlets had taken place, large-sized details of which were attached over the basis. Such type of protection was used till the 2nd part of the XIV century.

Over time, metal plates were being enlarged and being shaped into hand’s form, covering the wrist as well. Based on the leather gauntlet with metal discs and the first mitten gauntlets, the main elements of full-metal gauntlet has appeared, such as wristband, wrist plate, movable plates on the leather basis, which are shaped into the fingers’ shape. Only in the end of the XIV century, full-plate gauntlets displaced leather gauntlets with metal plates over it. One of the oldest model of full-plate gauntlets were belong to the knight of the Eresby family. Pattern of knight’s garment was founded out on his grave, dated 1410 year. This model of gauntlets consists of the backside plate with five fingers, wristbands are flat and belled. 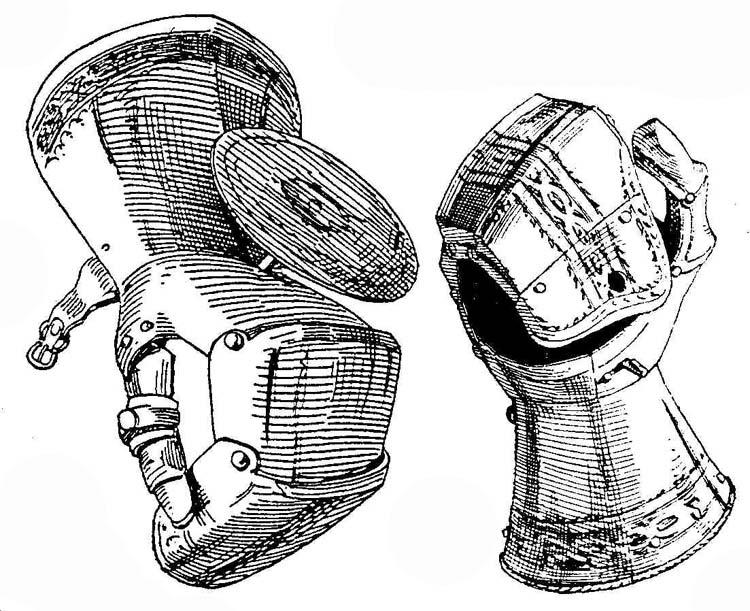 From the left - gauntlet with rondel, part of armour of  Federico I Gonzaga, Marquess of Mantua (Italy, circa 1480 year);

from the right - gauntlet with lock mechanism part of armour of  Ferdinand I (circa 1560 year).

Upon a century, scale part of thumb has started to be attached with hinged joint. Besides the hinges, in the XV century scale gauntlets had gained popularity. Such-like elements of armour had rondel (on the left gauntlet only). According to expert opinion, rondel was intended for two purposes: to fix the halter and as additional block for shield. Also, full-plate gauntlets with lock mechanism were popular these times. To make lock mechanism, additional plate length to the wrist was required. This plate had splined hole, where wrist pin had been inserted. When reed were being rotated, the fist was fixed in the closed position, so weapon could be held even on hard blow. This mechanism was required to hold sword or spear on like grim death.

To the end of the XV century, development of the functional elements had been almost finished and swordsmen began to pay more attention to the design of their creation. Gothic gauntlets became the most outstanding example of the armourer craftsmanship. So, the perfect example of eye appeal and functionality is gauntlets, part of armour of Sigismund, Archduke of Austria, which are dated 1480 year. German craftsmen made these gauntlets with distinctive handiness: knuckles are covered with figured cuts and elegant extended wristbands have brass plates with lilies on it.

Generally it may be said, that in time of gothic style craftsmen paid such high attention to gauntlets, that it was never before. And gauntlets had being made not only as part of armour, but up armour’s owner as well. 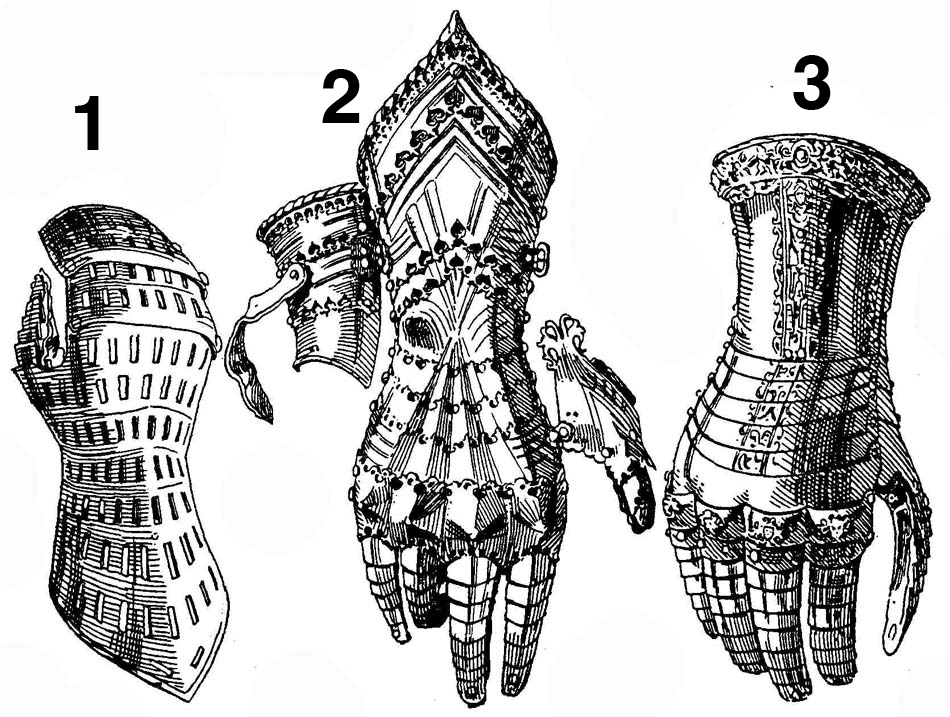 But refinement of such workpieces did not fix such weaknesses as heat-retaining effect, which didn’t allow hands ‘to breathe”. There were some attempts to correct such defect with appearance of Maximilian armour. For example, there were perforation of gauntlets, that were a part of armour of Emperor Maximilian I, made approximately in the 1480 year. Little holes on the surface of gauntlet made sweating lesser, when wearing this hand protection.

Also, armourers started to work at the ergonomics of metal gauntlets. Landsknechts had a big influence at this process, as they “set the pace” to armourer with demands for lighter and more mobile gauntlets. From the 1530 years, gauntlets without plates for knuckle protection had appeared. It happened in chase of better mobility of hand protection. Plates over the fingers had being replaced with mail or little metal rings, which were sewn on the leather basis. Sometimes you can see italian brigandine gauntlets of the middle of the XVI century, in which mail and little iron plates are combined effectually. Such mix was very good for protection from rapier, spadroons or falchion thrusts, but was absolutely useless against the heavier weapon. 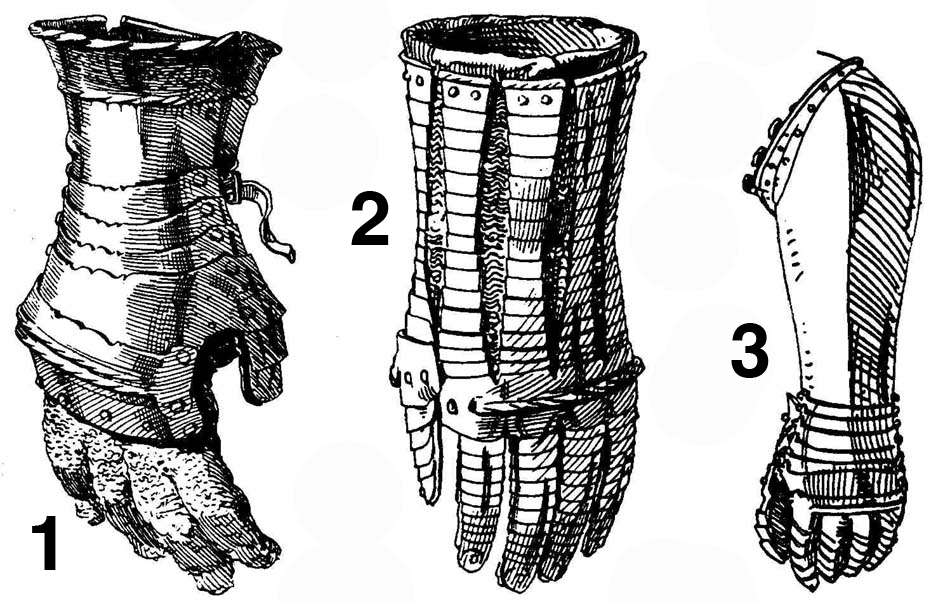 Necessity in good mobility was reflected in metal gauntlets with scaled fingers, which had one or few of them covered with mail only. Such particularity could be explained by active use of pointer finger when handle the sword or pole-arms.

Some of the last models has elongate wristbands, which acted as bracers and protected the forearm as well. It is so called “pikeman” gauntlet, that was in use up to the end of the Thirty Years’ War 1618-1648 years.

Steel Mastery knows, how to make reliable hand protection! We will gladly cratf fingered gauntlets or plate mittens for you of any historical epoch.

We used some information and illustrations for this article from Wendelin Boeheim’s “Handbuch der Waffenkunde. Das Waffenwesen in seiner historischen Entwicklung vom Beginn des Mittelalters bis zum Ende des 18 Jahrhunders”; Claude Blair’s “European armour” and everpresent web:) We do not pretend to be an owner of pictures, we used them as illustrative example only. 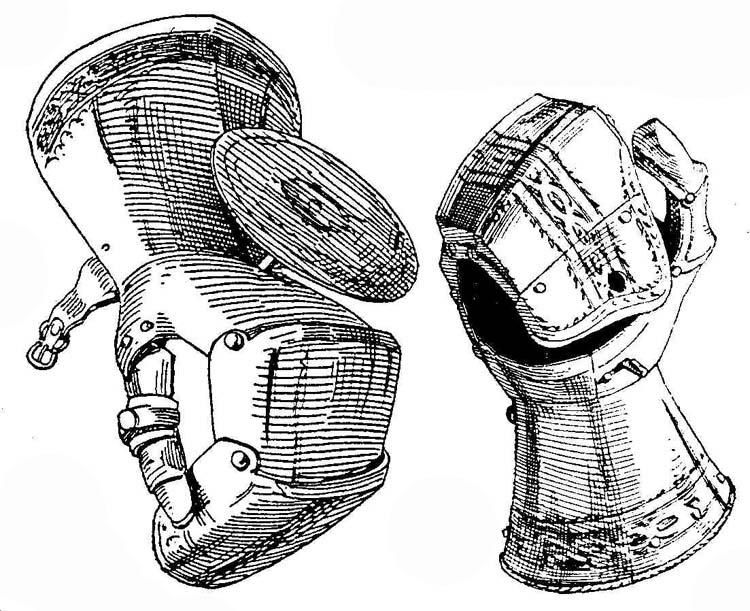