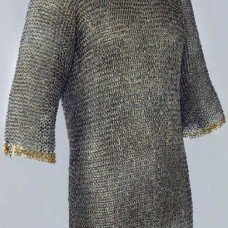 If we retrace process of plate armour developing through all human history, we will notice, that modification and mastering of defense equipment align with development of attack weapon. This regularity is explainable. Invention and implementation of new types of weapon demand parallel step almost instantly - invention of the efficient and forceful protection from it.

Development of such interesting and important part of defense equipment as chainmail is closely related to the progress and spreading of spikes, swords, sabers, arrowheads, etc. on the territory of European and Asian lands.

Up to now, historians cannot specify, when exactly warriors began to use body protection, because primal examples had not been extended. Research workers mention VI-V BC as approximate time of its appearance. It is reliably known, that this armour had being made of tannage or strong rope. Later, crafters began to reinforce protective quality of armour by attaching of small wooden or metal boards, plates or rings to the base.

First chainmails, preserved in the Scythian grave-mounds, are dated by this period. They looked like leather shirts, on which bronze or iron scales were sewn. Probably, the Sarmathians derived the usage of such armature from the Scythians. As Sarmathians’ armour became very massive and heavy.

The Etrurian, Celtic and Gallic tribes were using similar armature in the III century B.C. Roman legionaries “borrowed” an idea of such body protection from the Gallic tribes. Chain mail, which was popular among Roman soldiers, was called «Lorika hamata”. It was comfortable in wearing due to its short sleeves and wide body part. At the same time, it protected of sword blows and darts at the highest level. Excavations confirm that Romans were using such protective gear throughout Roman Empire, up to its breakdown. 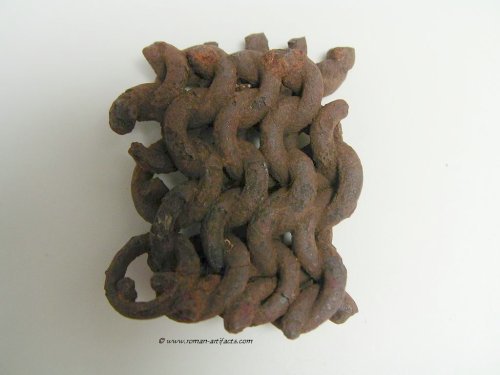 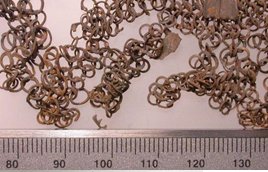 Chainmail (or mail armour) got peculiar widespread in Europe, starting from the X century. Body armour “hauberk” (“hauber” in France) was invented approximately those times. Hauberk had a form of mail knee-length shirt with long sleeves, often completed with mail stockings, gauntlets and coif (hood). In the XI-XII centuries, almost all knights of Western and Central Europe were using such type of body defense. Sometimes, chainmail could be reinforced with solid breast and shoulder plates, which were attached with leather belts. Mail metal sheet was used as aventail for back of head and neck protection and worn under the helmet.

When fire weapon had been invented, general popularity of mail armour decreased. Besides, chainmail was continuing to be actual one on the west of Europe until the early XVII century, and in the Asian countries - up to the middle of the XIX century.

Mailed armour was in wide use in Ancient Rus as well. Old manuscripts mentioned it as “coat of mail” (name “chain armour” had appeared not earlier than in the XIII century).

Mail armour got common usage in the Orient. In the XIV century, the Japanese developed their unique type of chainmail, which differed essentially from European analogue by its construction. Metal washers were sewn on the firm fabric base and had being linked together with double rings of heavy-gauge wire. That method made mail armour very endurable. Such defense had considerable weight and its manufacture took several months. However, at the same time, it could serve its owner throughout life. 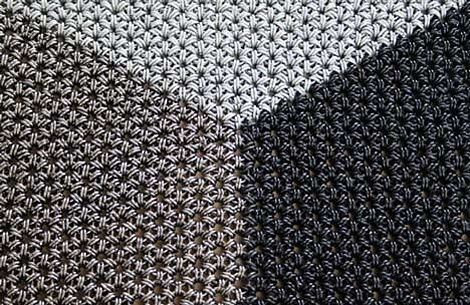 In the days of old, samurais were wearing knee-length chainmail jacket “Kusari katabira” and covering a head with mail helmet “Kusari zukin”. Of course, such gear did not protect against the smashing arrows, but during close combat, it defended of slashing blows of Samurai swords or spears “Sugu Yari” with double-edged spearheads. 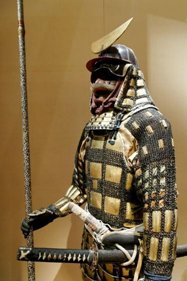 Regarding appearance of chainmail armour on the mainland Europe, historians have two main hypotheses. According to one of these versions, Crusaders borrowed an idea of such body protection from the Arabs and Saracens during the first Crusades. Time of mail’s spreading on the territory of present-day France, Germany and Italy says for this theory.

Followers of other version consider that medieval knights borrowed chainmail from Anglo-Saxon. Famous Bayeux Tapestry, depicting the battle of Hastings 1066 year, shows Norman and Saxon knights wearing knee-length chainmail with cuts from the front and back sides. It is supposed, that these cuts were necessary for comfortable riding.

Chainmail represents a metal sheet of riveted or welded rings. Diameter of rings were usually varying from 6 mm to 12 mm. Iron wire was used as ingoing material. There were the simplest linking “1 to 4” – each ring was joined with four near-by rings. More complicated linking, such as “1 to 6” and “1 to 8” existed as well. This method of linking was creating more solid mail sheet, but at the same time, weight of armour had been increasing. 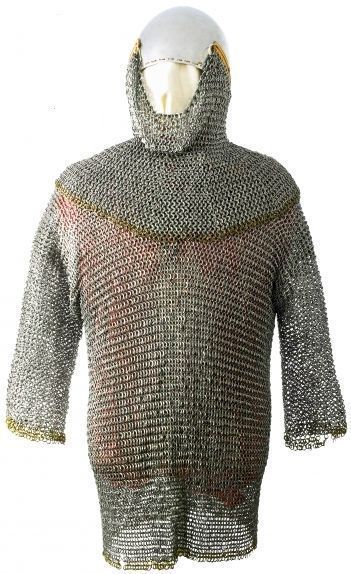 Mail shirt of Rudolf IV, Duke of Austria, the end of the XIV century, The Royal Armouries Museum, Leeds, UK 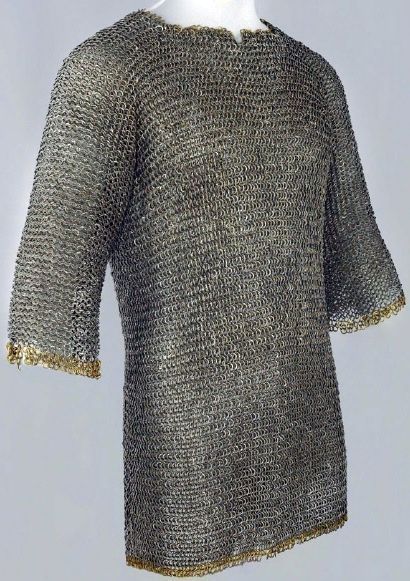 German chainmail, the end of the XIV century, The Wallace Collection, London, UK

Weight of mid-thigh-length chainmail was about 7-10 kilos. It half as much, than weight of full-plate armour. Besides, weight of mail had been distributed unevenly on a body, so the main load was on the shoulders. Knights used to tighten their waists with wide belts to reduce the weighting.

To avoid chafing of skin with metal armour, knights were wearing padded underarmour (which acted as additional body protection, softening the blows). Asian models of quilted vest were usually made of felt or cotton wool. 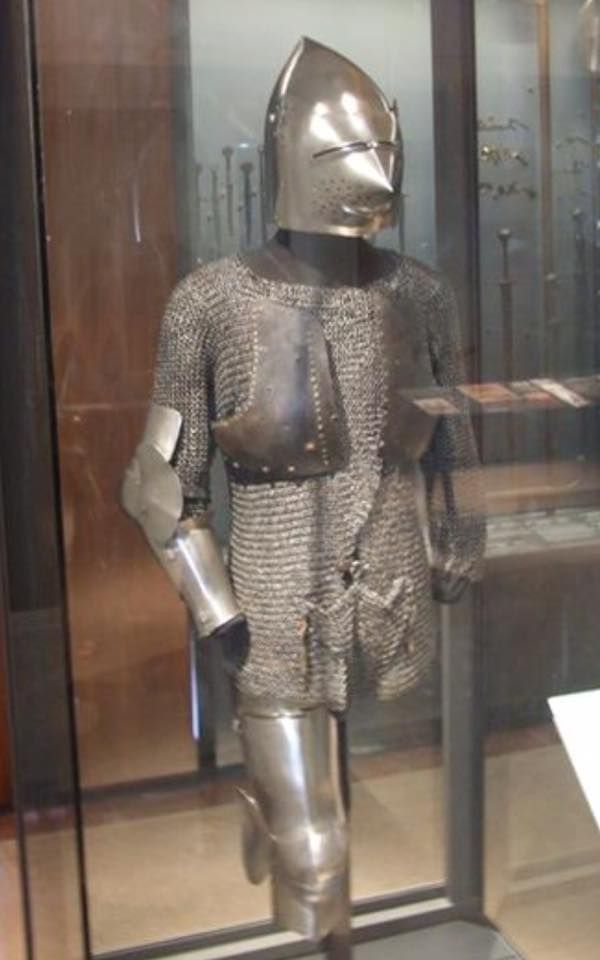 Mail hoods (coif) protected head and neck of a knight. For better fitting on the head, men were pulling leather belt or string through the rings of coif on the forehead level. To increase head protection, warriors were wearing heavy iron helmet over the coif. Face could be covered with mail flapper, which was fixed on the top of head with leather strings (like modern flu mask). Padded arming cap under the mail coif prevented hair’s meshing between metal rings and provided with more comfortable wearing of mail coif and helmet. 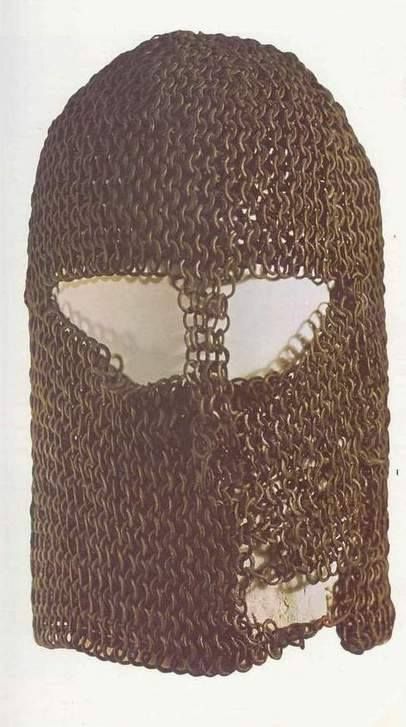 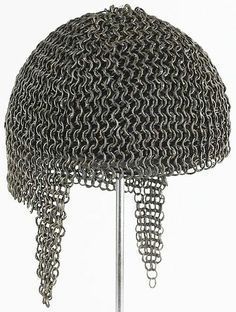 Mail defense was rather specific, as it did not protected against straight crushing blows. The main advantage of this armour was absolute freedom of movements. By contrast with bulky plate garb, which made a knight slow, sulky and often helpless, chainmail allowed easy running, fighting hand-to-hand, riding, getting over the long distance of campaign and even sleeping.

Folded mail took not too much space, and it was rather easy to wear it without exterior help. Another advantage of chainmail was a good possibility to hide it from view under the closing. Travelers, merchants, pilgrims and just gentlemen of fortune, who were roaming around the European countries during these tumultuous medieval times – all of them were often hiding a mail under their dress. And this ring protection saved many lives.

In addition, battle-scarred chainmail could be easily repaired single-handed with wire or leather string, just linking or adding new rings. Whilst, maintenance of full-plate armour required help of experienced crafter and considerable amount of time. 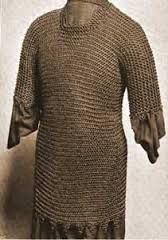 Truly speaking, mail armour was getting rusty and losing attractive look because of dampness quite quickly. In addition, rust led to descent of ring’s strength. Therefore, mail had to be scoured with sand and greased from time to time. Many knights were often carrying chainmail protection in oiled bags and put armour on just before battle.

Nevertheless, a fact, that ring-armour was continuing to be used as protective outfit together with heavy plate defense, testifies that mail provided with rather reliable protection. And it could deliver benefits in the battle, together with good maneuverability of a warrior.ё

You can take a look on our chainmails here. Also we can make for you stockings, mail coifs and aventail and mail gauntlets.

We used some information and illustrations for this article from: 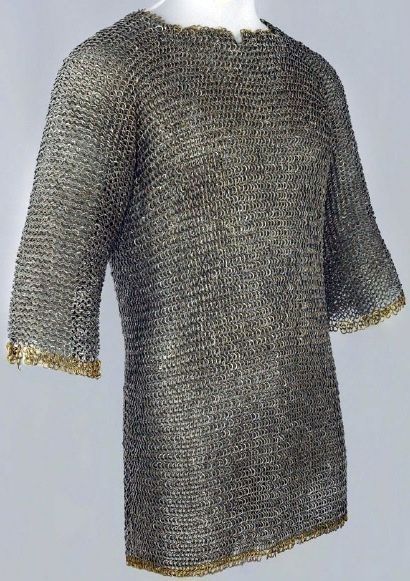