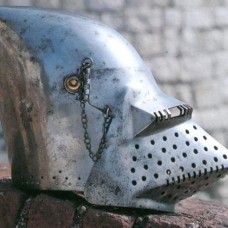 Couple of months ago we shared with you a process of bascinet’ making. Today we’d like to present for your attention introductory article, which opens cyclus “Bascinets”. What the helmet bascinet was? Which shapes of dome and visor were popular? What the word “klappvisor” means and many more interesting facts.

Helmet bascinet was popular not even in Medieval Ages, but it remains the same among modern reenactors. It was true to owners’ salt for about century and a half, protecting the most valuable part - a head.

The word “bascinet” (fr. bassinet) can be translated as “basin”, “helmet”, that the most adequately describes the primary usage of this armour type. In historians’ opinion, the word “bascinet” has started to use more actively in the end of the XIII - early XV centuries, but after this time, it was used less frequently. Bascinet was widespread all over the Western Europe and became one of the most popular type of helmets, that can find endorsement in frequency of use in illustrations, art and sculpture, which are dated of the 1st part of the XIV - early XV centuries.

On some of gravestones of noble knights of these times, there was not uncommon thing to represent Topfhelm (Great Helm) together with bascinet. And if the last one had being worn as the main helmet, so Great Helm was placed under the head (pic. 3 & 4), was kept in hands (pic. 5-8) or over the head (pic. 9).

Not only gentlefolks were owning the bascinets, but ignoble knights as well. This fact is testified by numerous extant artifacts from the private collections and museums of all over the world.

Topfhelms, which were used in the XIII century on the battlefields as the main head protection, had been worn over the iron helmet or bascinet-undercap, also known as “cerveiler”. It could be worn either under or over mail coif. Over time, undercap assumes more round shape and becomes a helmet bascinet, which gained popularity due to its effective protection during the battle actions.

Approximately in the 1330 years, bascinets with hooks (vevelles) for mail aventail attaching had appeared. Aventail covered the bottom part of face, neck and shoulders of warrior. It has attached to the bascinet with leather string or metal wire, which was passed through the vervelles. As vervelles were placed on the periphery of helmet’s edge, it allowed the warrior to protect himself with mail aventail all around. For more comfortable wearing, there was leather or fabric lining between aventail and inner side of helmet.

From the end of the XIV century, along with aventail, bascinets have started to be equipped with fixed movable plate - bevor, which covered the neck and bottom part of the face. This design triggered so called “Grand Bascinet”, which gained popularity in the XV century. Perfect example of this bascinet with bevor made by Italian crafters is kept in Doge’s Palace, Venice. It is interesting to note that helmet has been made in the end of the XIV century, whilst the bevor was welded a little later.

Primarily, shape of bascinet was defined with form of crown, or so called “skull” of helmet. Form of crown had been shaping up during all the time of bascinet’ using.  Backsides of crown had being stretched a bit at a time and covered the head below the ears. This measure was necessary to provide the knights more reliable protection during the wearing of bascinet cerveiler without Great Helm. So, this way classical helmet of round conical shape has formed.

In the 2nd part of the XIV century, armourers were experimenting with size-conscious design of helmets’ shapes, diverging the traditional round conical shape. Top of helmet is moved back, so back part becomes almost straight. Together with crown changing, front part of helmet becomes more strengthened, that was caused by military realias to fight face to face.

Early XV century, German armourers created a helmet of anatomical shape, known as “Ogival shape”. This type of bascinet had such name because of domed form, looked like onion or garlic.  It is worth to note, that for more comfortable wearing of helmet, lining of soft material (wool or linen) was sewn from the inside of helmet.

There was extra attention paid to face protection. During all time of bascinet’s existence, German and Italian armourers invented few ways to solve this issue. Early XIV century, face protection was simple and weak, and was made as metal nasel, which were fixed on the forehead part of helmet. It slightly protected eyes, but were used rather long time because of cheapness.

In 1340 years, first complete visors had appeared, and they covered owner’s face completely. Eye slots were narrow enough not to let enemy’s spear to get inside. Such visors were fixed after the manner of klappvisor (germ. klappvisier: klapp – falling back, clapping, visier – visor), that means visor hanging on the forehead part of helmet or on the side part - attaching with pin. In any moment, visor could be taken off.

In age of bascinets’ progress, specific pointed prolonged visor, which looks like hound’s face, has appeared. Just because of this resemblance, Germans called it Hounskull (germ. Hundsgugel Hundsgugel – word-for-word translation “hounds hood”, that can be interpreted as “muzzle”). Such form of visor allowed free breathing and safe face protection.

Together with pointed “muzzles”, armourer were crafting bowed rounded visors, which were called “pigface”. Armourers’ imagination was not limited of “pig” and “hound” visors, everything was depended on the whims and favours of customer and armourer’ creativity. Sometimes, visor was simply grid and was attached to the dome as klappvisor. Such protection was called “wolf ribs”.

You can seeall our helmets here.

We used some information and illustrations for this article from “German Medieval Armies: 1300-1500” Christopher Gravett; “European Weapons and Armour” Ewart Oakeshott; "Helmet", Encyclopaedia Britannica 11, Harold Leslie Peterson and everpresent web:) Pictures are taken from the web. We do not pretend to be an owner of them and use them as illustrative example only. 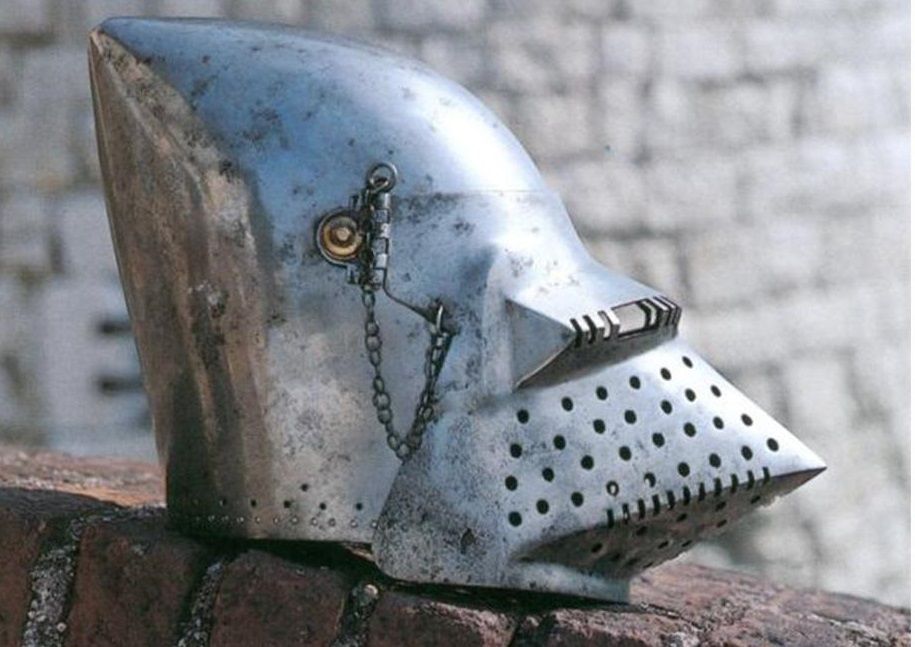