A day in the life of medieval knight 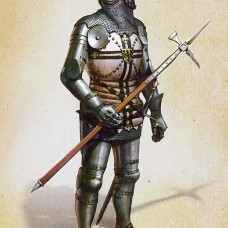 There're few episodes of the daily living of knights for your attention at the dawn of Medieval time. What did they face to when entering on the knight path? What sinuosity were waiting for them at the war- and peace-time? Let's have a look at one day of the knight life. 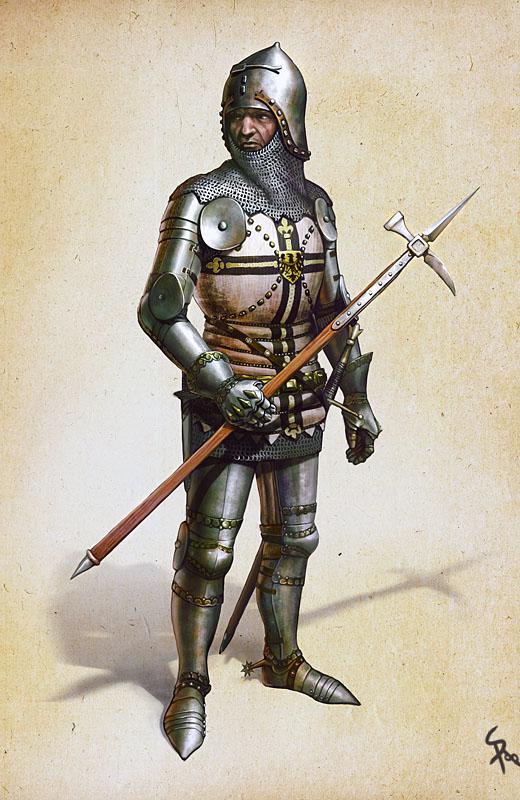 During eight centuries: from the VII to the XV, knight institution had been transcribed from the entirely military one to the inaccessible inherited “coterie” with religious and political interests. To the XV century in German lands, to become a knight, you were ought to be a son of the knight, who achieved an armour and served as esquire. The most honorable thing was allegiance in the knightly religious order, where all young men were aspired to, wishing to give their lives for faith in the fight against the with heathenism.

XV century was a time of the Teutonic Order fall, besides it did not prevent the zealot of  knight religious practise to join the Order. Joining the ranks of Order’s knights was the most important day of a young man’s whole life.

Joining the Order of Teutonic knights.

For a long time I had a dream in my heart to dedicate all my life and talent to the Teutonic Order. It's Christmas eve and very important day for me. Today is the day I'll be honoured to have a black cross on my clothes, finally after long time of different challenges.

I had been discouraged from the initiation of the Knight of Order, I was interviewed if I deserve to be a knight and if I will not smirch the honour of crusaders with my juvenile ardour. I answered steadily, but thoughtfully and zealously. My wish to live for Domus Sanctae Mariae Theutonicorum and the Lord God is wholehearted. Order’s members, interviewing me, they knew, that my decision is well-reasoned with all responsibility.

I had been discouraged from the initiation of the Knight of Order, I was interviewed if I deserve to be a knight and if I will not smirch the honour of crusaders with my juvenile ardour. I answered steadily, but thoughtfully and zealously. My wish to live for Domus Sanctae Mariae Theutonicorum and the Lord God is wholehearted. Order’s members, interviewing me, they knew, that my decision is well-reasoned with all responsibility.

I am a free man, a son of the knight from the noble kin, all-honored in Mark of Brandenburg and other land of Sigismund of Luxemburg. I have never jibed in the face of the death, stood steadily for the faith in the lord jesus christ and righteous paths.

I vowed the obedience to Order. My probation period has started from this vow. My body and soul suffered all the hardships, which are waiting for me in days to come in the service of Order. Within six months of hardships, I haven’t only losе my faith in to become a part of German Order, but also confirmed my opinion, that my life is meant for help, protection and healing.

A day before accolade, being an esquire, I repented the sins against the God, for the sake of which I join the mighty Order of crusaders, and also took communion, as every Christian is ought to do. Had standing the Ad Missam in nocte and Ad Missam in aurora, I’ve started to prepare emotionally to robe the knight garment with a Cross. 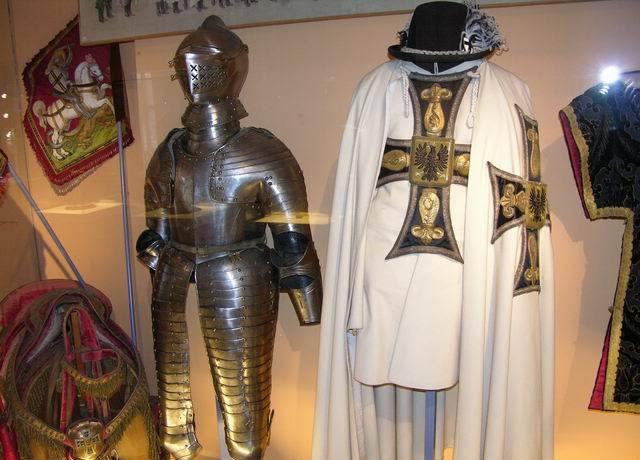 In the Christmas morning, once action has been finished, I bent my knee to altar and raised eyesight full of adoration to God and the Holy Virgin. In front of the Master of Teutonic Order and my future brothers in Order, I made a vow of obedience and vowed to live for Christ and to enrich the kudos of knightly order.

After solemn oath, I was belted with a sword in sign of accepted chastity and allegiance to justice forever. In sign of charity and memoriam of the given oaths, Holy Father bestowed me a kiss and gave a slap, so I couldn’t forget about imposed responsibility and honor to become a part of the Order.

It is time to garb the God blessed garments of the Order with a Cross. Starting this day, I am not an esquire anymore. Now I am a brother for all the Teutonic.

The morning has been started with sustained preparation for the coming battle. Today is the 18th of September. The Order had to relieve the town of Konitz (or Chojnice, how Polack call it), but it didn’t happen though.

I woke up at first light - sinking feeling did not go out of me, and there was unbearable clash in my ears, just like I stand right under the stipple and one’s tolled an alarm bell. After substantial, but abominable breakfast, I went to wall tent to make myself knightly and head to the review. While scout were helping me to wear my armour, esquires fed the horses and prepared harness and munitions.

During the wappenshaw, we stood in few long lines. Bernard von Zinnenberg, Czech sellswords’ commander, rode past us. This Moravian knight being on active duty at Teutonic, he was cunning and brave one, and this helped him in the battles not for once. Some knights dislike him, believing, that sellswords (Czech in particular!) cannot be trusted. Or, in any case, you have to be ready for everything, because a lot of Czech are apostates and blasphemers.

This knight could encourage his army with proper words. He said, that Polack and Lithuanians have powerful force of more than 17000 soldiers. Silence fell. We were keeping bar bits, thinking over the real risk of this force. But baron Zinnenberg turned the words, which made our hearts shuddered not of fear, but of the strength and boding of victory. In keeping with his speech, Polack are a crowd, but they fall short of the moderation and organization to the German and Czech knights. The Lord God is on the side of the Order. Moreover, Konitz is nearby, forces if which may play into the hands. 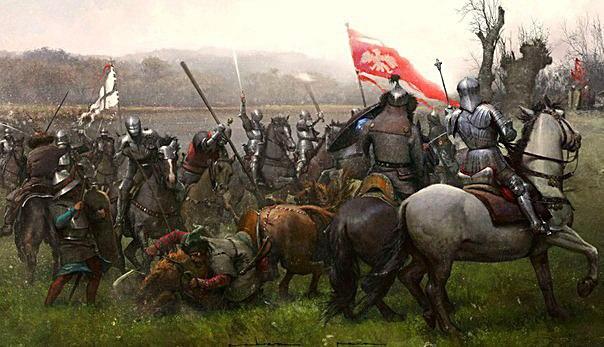 Closer to the four o’clock, battle has been started near Konitz. Poland command dod not depart from their traditions of warfighting with German - it all started with the tip-and-run of Poland horse cavalry. They were succeeded to disrupt our force. Sharp battle were enacted, at hte time of which our Zinnenberg, our commander had been taken as prisoner. 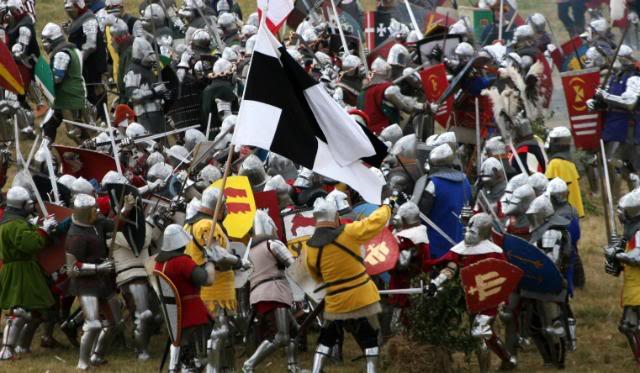 Polack stood between Konitz and army of the Order. We had to burst out to the town with a blood, trying to reach the safety place. When Teutonic knights were hewing their way to the rescue, our foot soldiers organized protective fortifying of the wagons, known as wagenburg. This tactics allowed the soldiers to come out unscathed of the Poland horse troops. 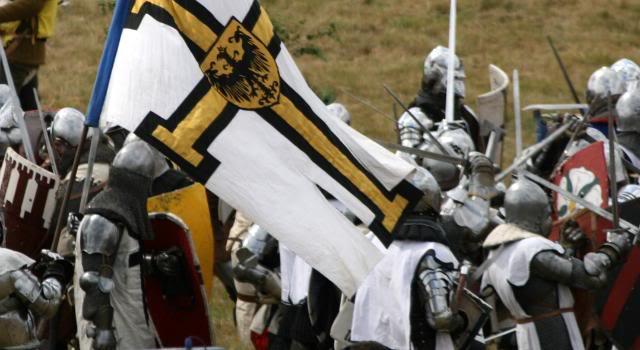 While Pole were being concerned about us, gates of Konitz had being opened and Teutonics were flowing like water from the inside. Thunder of our exultance had run through the ranks. Polish army had nowhere to go. Panic and disarray covered the battlefield. Inspired with attack, we were charging the squibbing enemy, forcing them into the bog. 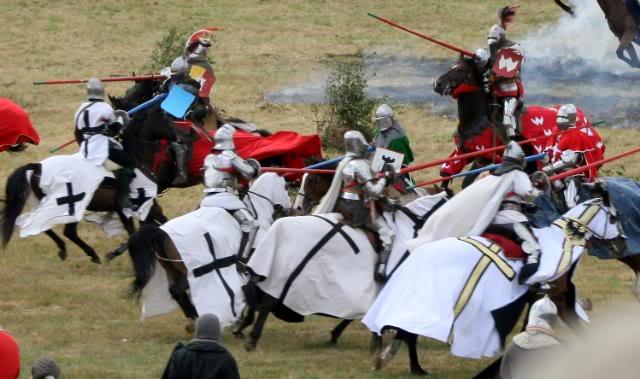 Warm with battle, I did not notice a polish horseman, who were galloping at me from the right ground flank. He stroke me with heavy mace with all his might. Rumble of alarm bell has appeared again. The world came dark before my eyes. I did not fall on the ground of the strike, but stay in the saddle. My horse were carrying me at the back, walking deliberately through the chaos of battle around us...

…I woke up only the next morning. Rumble has gone as well as the memory of glorious battle near of Konitz, where knights of the Order gained the victory. Only clotted blood near my ear was reminding me yesterday’s medley.

Material for article was taken from: Jean Flori "Chevaliers et chevalerie au Moyen Age"; Ramon Llull "Book of the Order of Chivalry"; "The Teutonic Knights: a military history" by William Urban, etc. Photos of reenactment are taken from the web. We do not pretend to be an owner of them and use them as illustrative example only. 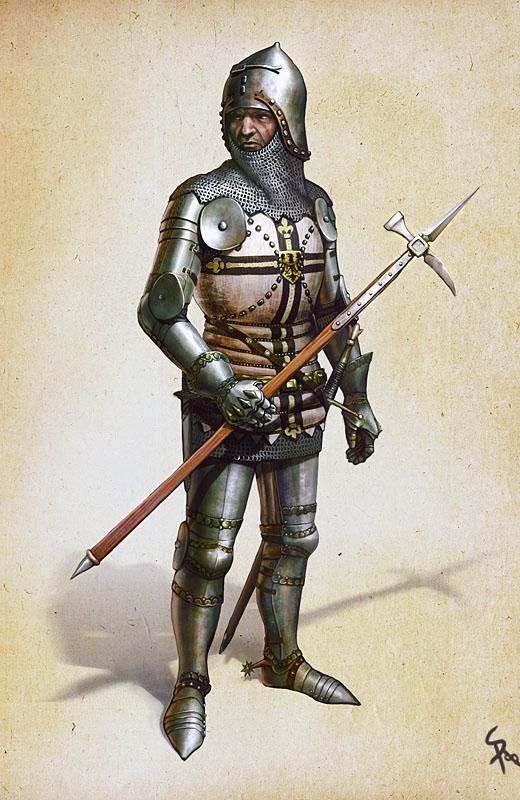