To the glory of Odin! 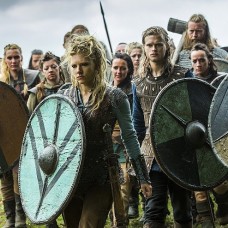 To the glory of Odin!

“Vikings” is one of the most striking series over the past few years. Rugged sea dogs, fierce battles, gorgeous and stouthearted women, campaigns and raids. Well, series producers delighted everybody except of history admirers. Supporting Ragnar and admiring Lagertha, fans of history were nervously gulping heart drops at the sight of armor and clothing. One web site even called such strange Vikings’ armament a “Mad Max style armor”.

Why? Let’s discuss it.

First of all, we should remember that Ragnar Lothbrok is a semi-mythical character and 100% evidences of his existence were not found. However, it is assumed that he lived in the middle of the IX century. So, that is the period, on which we will orient in searching of historical analogues of series’ garment.

The typical and not the poorest Viking of that epoch looked like on the picture pretty much: 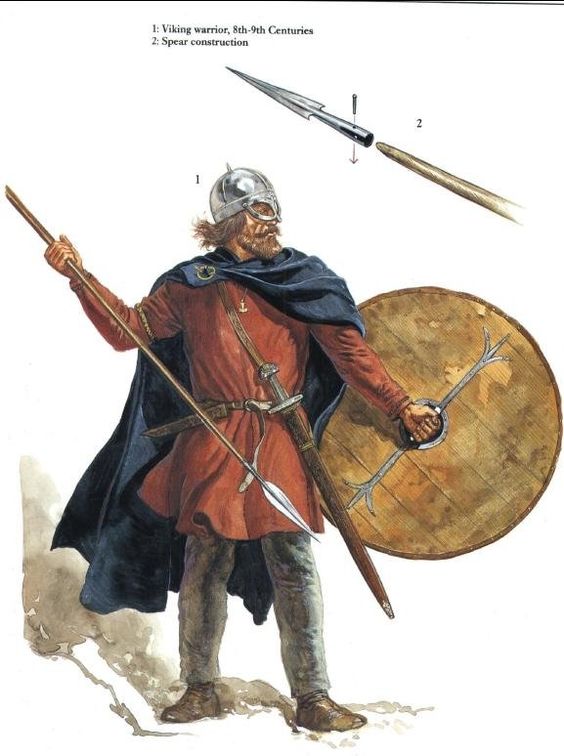 He wear the simplest woolen shirt (probably, two of them), leather pants (tight or wide) and common leather shoes, woolen coat and quite hefty golden or metal adornments: fibula, bracelet and Mjollnir. There are sword and knife on the belts, and shield and spear in holdfast. Bu the way, he could be weaponed as with bow, so with chip-ax.

People did not know what the boots are. So, our Viking (and his wife too) wears common leather shoes (like those, which are kept in National Museum of Ireland): 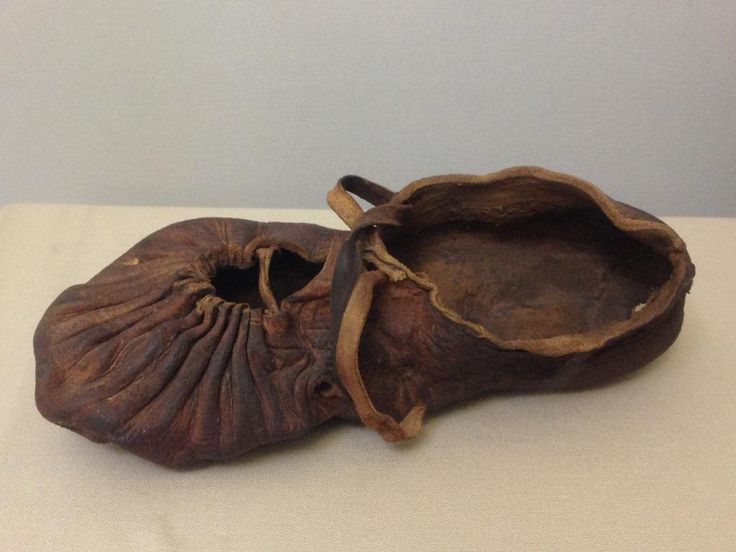 As an armor, our proud-hearted son of Odin probably wears the simplest padded shirt. For obvious reasons, none of them came down to us. Besides, some ancient pictures show us shirts with strips, imitating stitching. So, historians believe that there are pictures of the earliest gambesons. If our Viking is rich and successful enough, he probably wears a chainmail. Head is protected (though, not every Viking’s head) with a helmet, and there is the most expensive part of Viking’s armament, at its cost probably equal to everything put together.

Girlfriend of proud warrior wears undershirt, one more shirt or dress, apron-dress, woolen stockings, straight pants and, probably, a coat. And, the most important – many attires. Hair is braided and covered with kerchief or hood, if a woman is married. 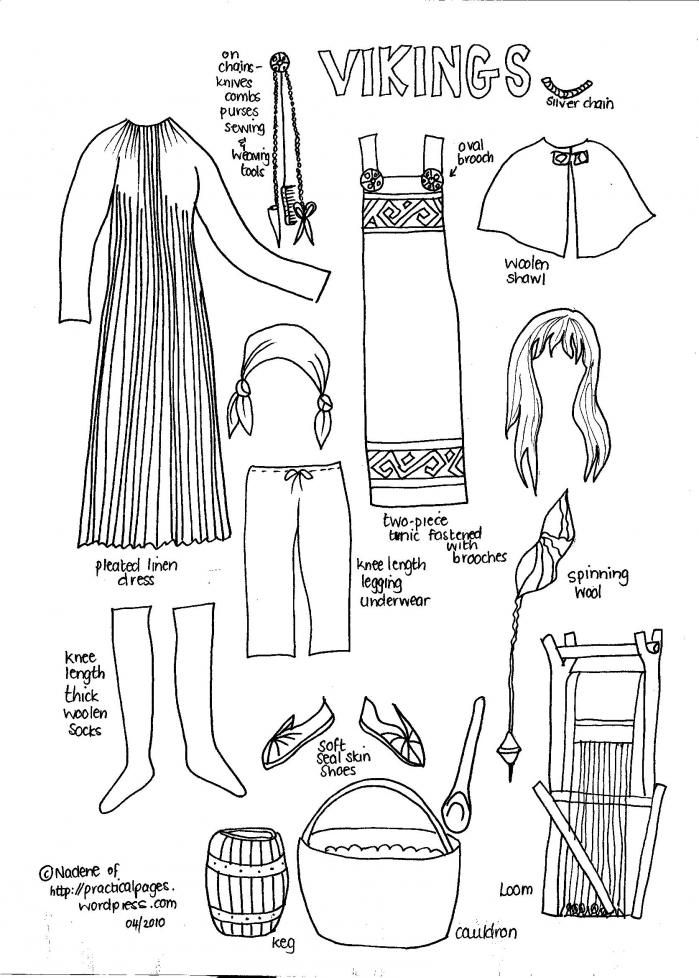 One needs to understand that Viking raided not because of big love, but poorness. Harsh climate and scanty harvest reign on the Scandinavian lands, so it may feed none too many people. Well, while it is not too much things to do (except of “making children”) in the cold nights, so popularity of Scandinavians was increasing and quantity of food was growing smaller and that forced Vikings to rob neighbors. So, Vikings were rugged not because, they were like that, but because they were hungry.

Total poverty left a personal stamp not only at lifestyle, but at armor, in which starving Vikings were earning daily bread as well. Firstly, it was uncustomary thing to sepulchre in armament. Armor is a rich heritage, and despite of filial devotion to father, died like a hero, sons were dividing his armor up, but not buried together with deceased daddy.

During the period of question, chainmail was the most advanced and, mildly speaking, the most expensive armor of this region. So expensive that earls, konungs and other deep-pocketed and tough lads could afford it. Though, even their chainmails hardly reached knees and did not have too long sleeves. However, neither entire chainmail, nor a fragment of that period had been found, only few separate rings.

Not every Viking could boast a helmet by the same reason. So, what remained to underclass? Quilted shirt of cloth, leather or linen with lining of sheepskin or horsehair. Such quilted jackets were worn as entire armor, so softening under chainmail.

Head of respectable and deep-pocketed Viking was probably protected with one of these two helmets: older model of the Vendel Period (VI-VIII centuries) or newer one, which is similar to a helmet, found in Gjermundbu and dated by late IX century.

For example, one of early Ultuna helmet from is made up of metal frame and a “cap”. Frame looks like a wreath around a head and lengthwise strip from the nose to the top of head. From the front, this strip is placed over the wreath and run into nasal plate. Besides, frame is completed with basket-type weaving of metal strips. Amazing design of hung-up vertical strips protects neck from the back and on the sides. You may see it in Uppsala Museum in Sweden: 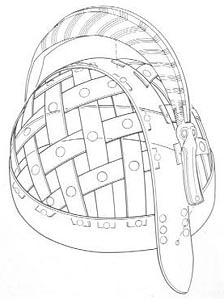 Helmet from Gjermundu consists of metal wreath and criss-crossed bands, riveted on it. Four curved triangular “petals” were attached to this carcass; upper part of face was protected with mask. Chainmail aventail was attached to the back part of helmet and protected neck. Today, you may see in the Swedish History Museum: 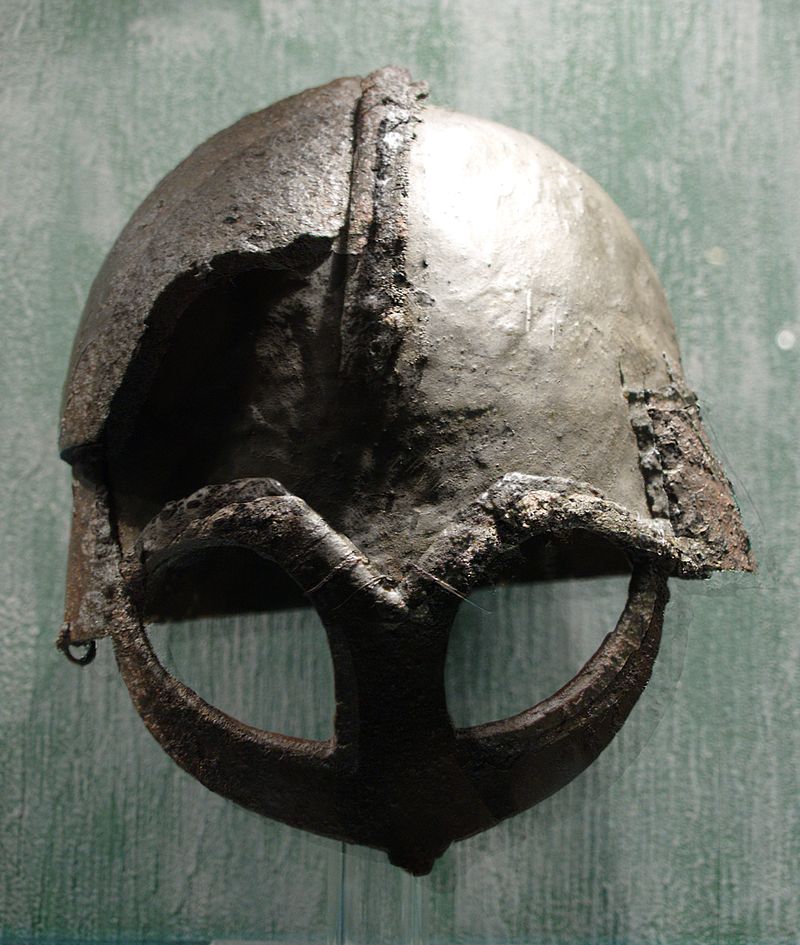 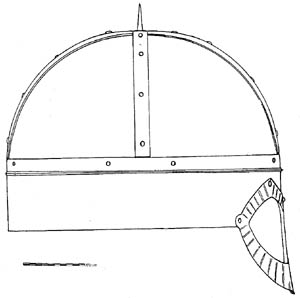 Well, so what do we see in series? We see typical Hollywood stuff, both good-looking and fictitious.

First thing, which catches an eye is leather vests of Vikings. 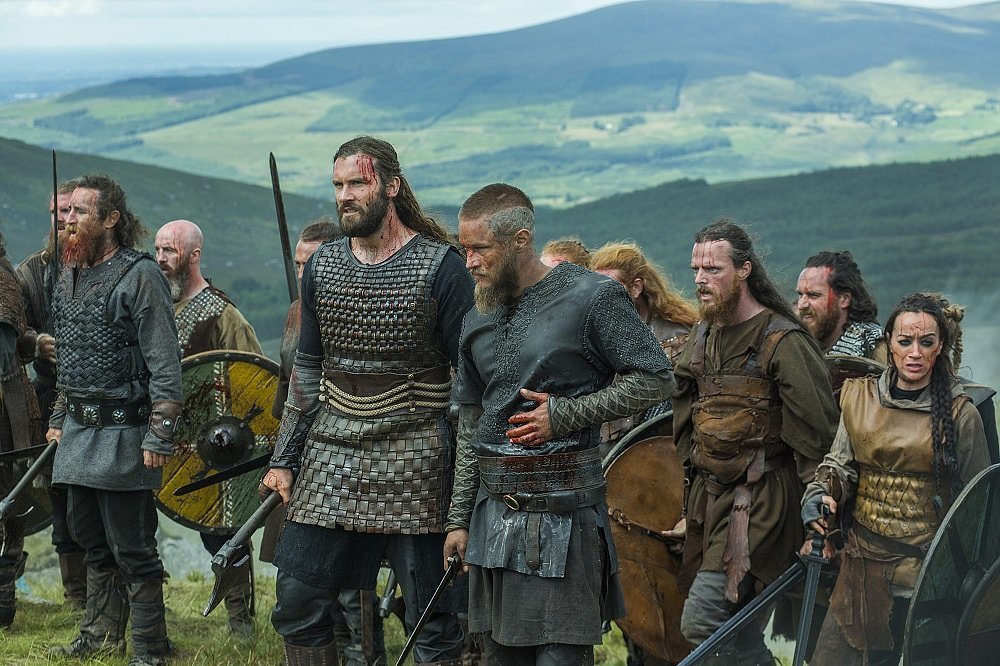 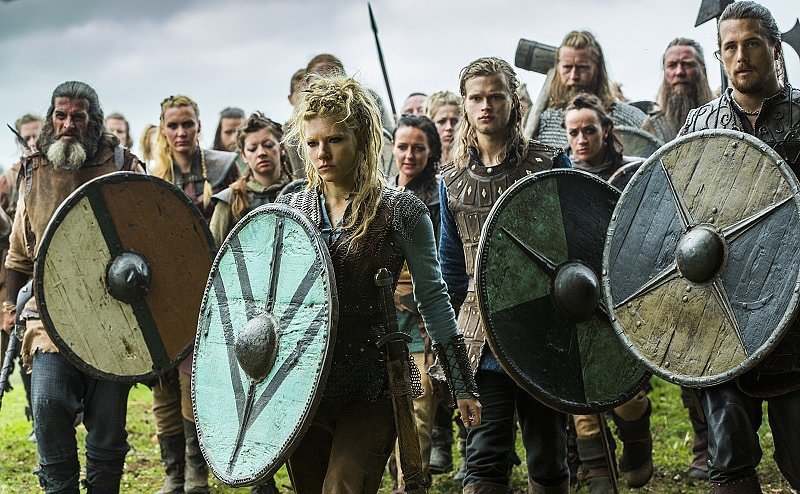 We do not deny that they are cute. Lads in such vests would be appropriate at biker festivals, but not on the drakkars.

Actually, on the first photo we see two swords, looked like products of ColdSteel, referred to other period and region and made of black plastic.

The next wonder armor is a basket: 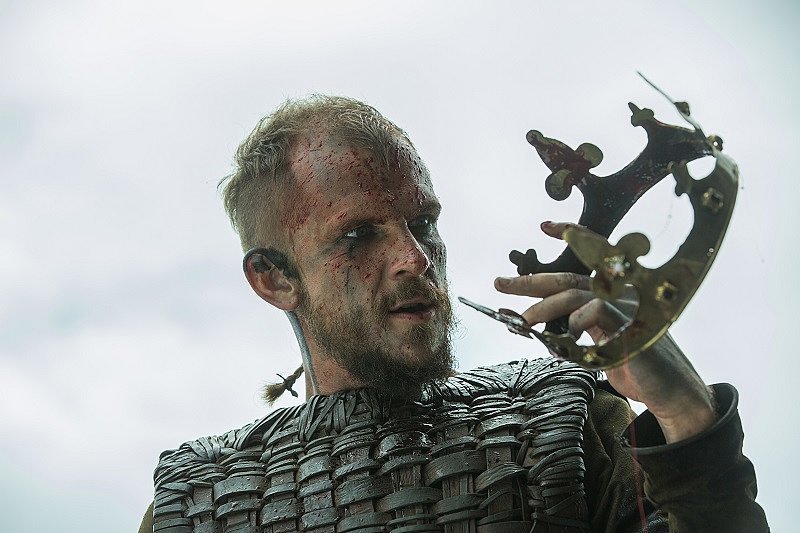 The most interesting thing that such armor existed (even still do in some places) – in Africa, for example, at clan wars of the last wild tribes. When it comes about Vikings, wearing such baskets… Well, we think you understand.

Further, there are metal plates over the leather base again. We already discussed this topic in review of “Game of Thrones”: even early brigandines had plates covered with leather, but not vice versa. When plates are from outside, it comes about another armor and another region. 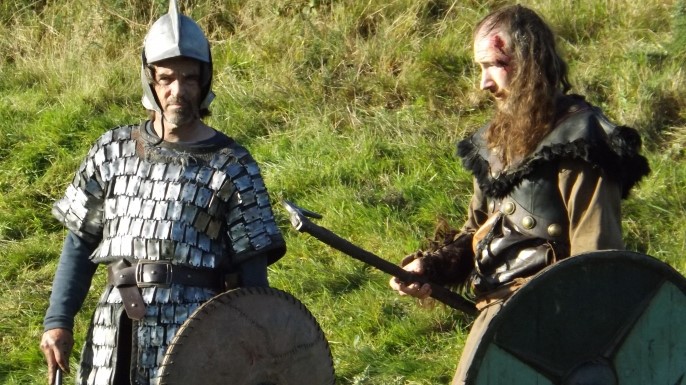 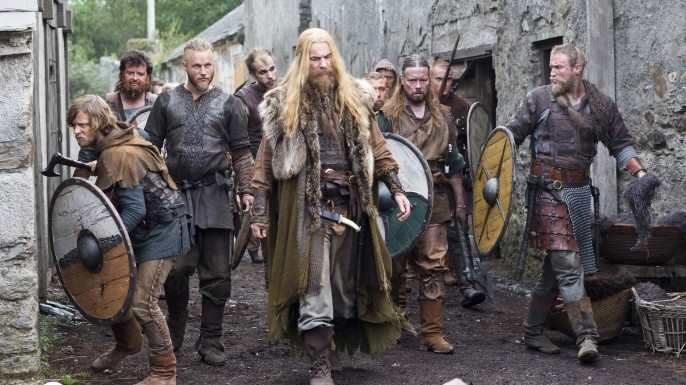 Besides, pretty much everybody wear fancy leather boots that is also unlikely. Well, and a piece of chainmail (remember – crazily expensive and rare), classy floundering on the hip slightly confuses. Only costume designers of series have a clue, what for it is.

One more discrepancy – they did not have technologies of fur dyeing these times. Besides, they did not dye it. What for? 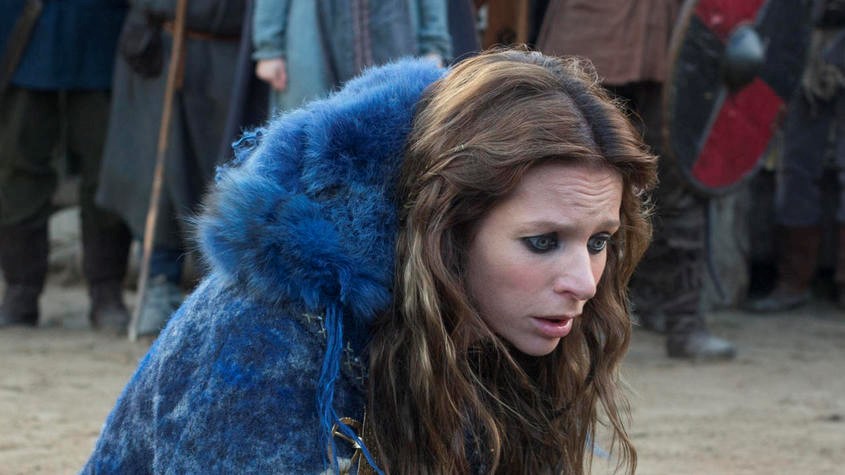 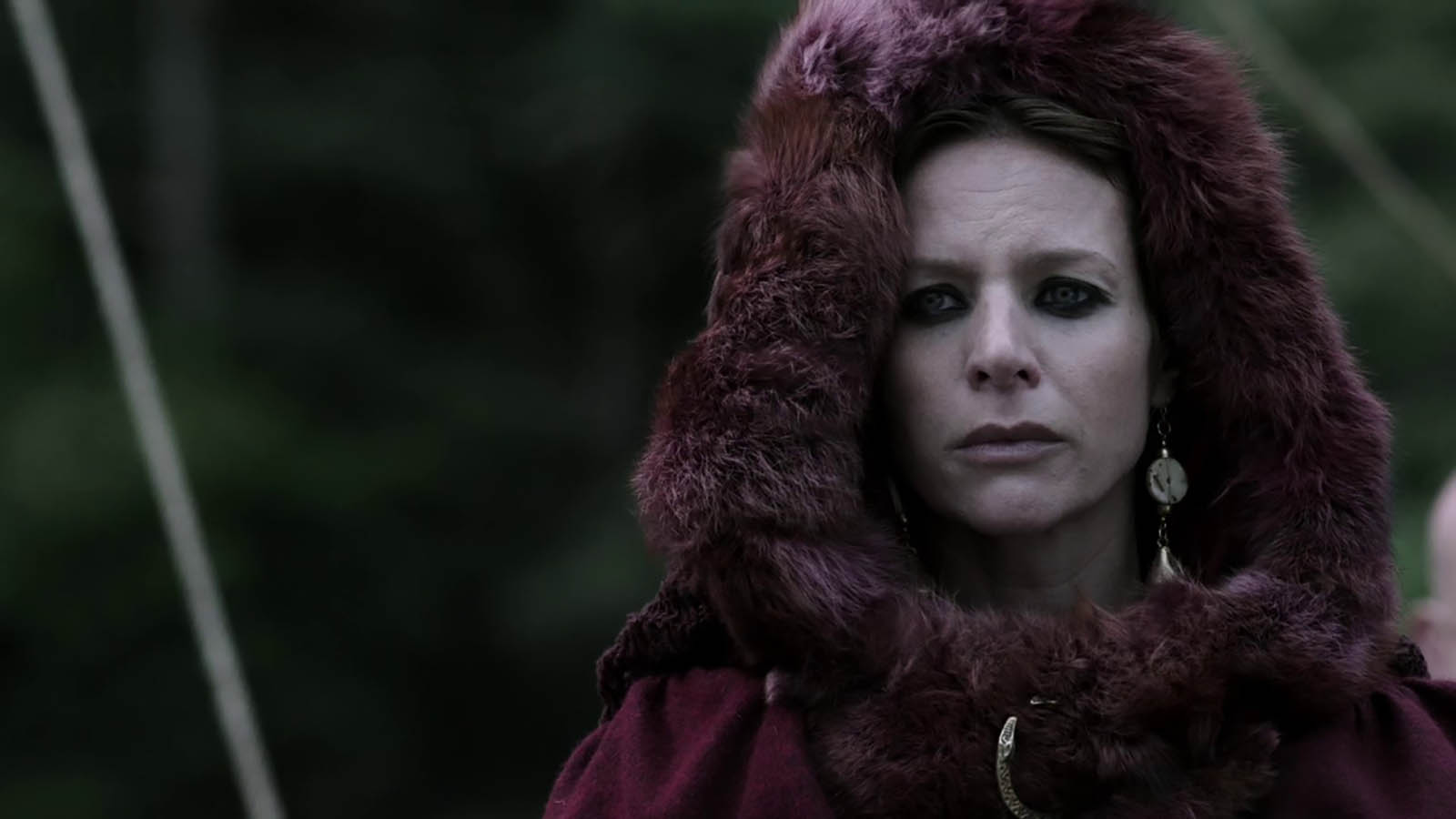 By the way, just a reminding, married women braided hair and hid them under the cap. So, flying hair of Lagertha, Siggy and others is beautiful, but unlikely.

Decollete of the second wife of Ragnar is a part of the same story. European women started to bare breast only in the XIV century. Before that, women wore dresses almost to the throat, especially on the severe North. 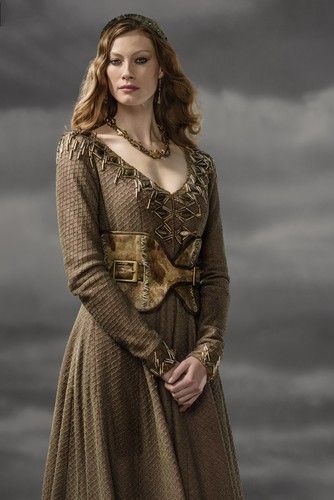 Well, let’s not be too harsh to series. It stands out from majority of predecessors with a good reproduction of daily life of those times and is definitely worthy of attention.

What about individual replication of Viking look, so we are ready to make as Viking clothing for you, so custom armor and helmets. However, for all interested people, who wants to duplicate outfit of series’ character, our crafters are ready to color fur, make a leather vest or weave a basket. Anytime!