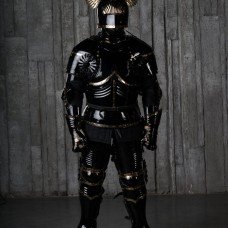 Surely, you’ve seen wonderful photos of black knight of “Steel Mastery” latest photo-shoot. Beautiful, shiny armour with carving elements and brass decorative strips attracts attention at the first sight! And in this article, we’d like to tell you about this medieval body protection.

Claude Blaire, the well-known English historian and weapon and armour expert, was right to name XV century as “The Golden age of armour”. At this particular time full plate armour a.k.a gothic armour has appeared.

Starting on the 1420 year, knight’s armour had being revolutionized. Full plate suit of armour (called also “white armour”) has replaced colourful brigandines decorated with emblems. In Germany, “white armour” has been called “Kasten-burst armour” - “box-shaped breast” because of angular form. Cuirass of Kasten-burst armour had long steel flared skirt, and the most popular model of head protection - helmet bascinet - completed the armour. Kasten-burst armour was widespread in Germany and Flanders in the beginning of the XV century. 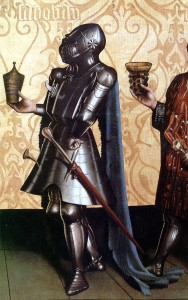 At this time, main european schools - german and italian - has finished its developing. What is more, in the first part of the XV century, italian masters had a strong lead, and only by the 1480-1490 year German masters were able to compete with them, and even surpass in a  short time. Nuremberg and Augsburg masters achieved a great fame, guaranteeing perfect quality and high reliability of armour.

In the end of the XV century, full plate gothic armour has appeared in Germany. It had been developed for complete protection of knight’s body during the battle. Sharp and piercing corners of armour’ parts (especially, on pass-guards, sabatons and gauntlets) had become outstanding characteristics of gothic armour. It combined two main features: reliable protection and good mobility. Metal used for armour was light, but firm at the same time. 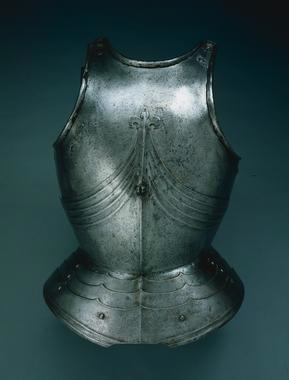 Usually, cuirass was consisting of two or more plates, partly overlapping one another. Oftentimes, edges of plates were saw-edged or figured. It also was repeated on the back plates.

Vertical reinforcement rib was placed centrally on the breastplate. All cuirass was decorated with fluted lines, that could override direct blow and change sliding path of weapon. Besides that, goffer essentially raised reliability and durability of armour and did not affect the weight too much.

Cuirass was waist-suppressed and flared at the bottom a little. Such construction were allowing the knight to bend, unbend and ride without movements’ constraining.

Often, movable tassets for thighs protection had being attached to the lower part of cuirass, despite of the some discomfort they caused during the riding. Shoulder were protected with spaulder, which were attached to the cuirass with leather strings with steel points. Large spaulder could cover upper parts of breast, back and arms.

Armour’s pass-guard were closed. Outer side was shaped into pointed corners, so pass-guards covered not only the joint, but bend of elbow as well. Side wings were serrated and could be decorated with grooves. Gauntlets of the gothic armour were more movable, than preceding models of gauntlets. Often, the first phalanges of four fingers had being closed with one movable plate and the farthest phalanges could move independently. Extended gauntlets were narrowed at the wrist and decorated with sharp spikes and divergent lines.

As well as cuirass, greaves had reinforcement ribs which harden the armour. Greaves were consist of two parts, connected with hinges.

Sabatons had being made of slim plates and had main peculiarity - very long and narrow toe-cap. There was not only fashion statement: such toe-cap was functionally useful, when knight were riding, as it prevented the loss of stirrup. Besides, rider could cause grievous bodily harm to enemy foot-sloggers. There was also specific design of sabaton, where extra long top-caps could be unstrapped not to impede the walking or running.

Perhaps, helmet sallet was the main characteristic of gothic armour. This hollow helmet without comb and with lumiere had long tail - neck plate, that protects back side of the head and neck. In particular, sallet has become a prototype of german helmet in the time of the Second Reich in the XX century, but with shorter neck-flap.

Sallet had been complemented with bevor - a part, which protect chin and the front part of the neck. Some of german and italian armourers were making sallet with movable visor, that could be fold back, opening the face. Often, dome of helmet and visor was decorated with reinforcement rib as well as the other parts of gothic armour.

Small mail elements were addition to the armour. They were covering inner side of the elbow and knee joints, armpits and groin.

Full-plate gothic armour consisted of a few tens of elements, but at the same time it wasn’t very bulky. Despite of the weight was about 20-25 kg, it’s apportioned on all the body. Historian M. Gorelik in his issue “About Balmung, Durendal and their lords” provides an interesting example: nowadays, actors engaged in movie about knights wearing the full-plate gothic armour and additional equipments, and they are able to work in such outfit for a few hours, running, jumping and performing.

So, wide-spread belief, that battle armour is very comfortless and extremely heavyweight, is not absolutely truth. In this regard, german and italian armourers did their bests. Armour almost hadn’t blown and there was a big insufficiency of it, as inside the armour there was very hot during the battle.

There was too hard for knight to indue the armour by himself. But with help of proficient esquire, it had taken about 20 minutes only to wear the armour. First of all, shirt, pants and padded armour had been worn. Often knights were winding fabrics around the knees to prevent chafing. Then greaves and tasses, cuirass, to which tasses had being fastened. Then there was turn of spaulders and arm protection, after which servant were helping to wear and fix sabatons. To complete garment, knight should wear sallet and gauntlets, take weapon - and here is he ready for battle!

Here you can see all Steel Mastery full armors.

Pictures without "Steel Mastery" logo are taken from the web. We do not pretend to be an owner of them and use them as illustrative example only. 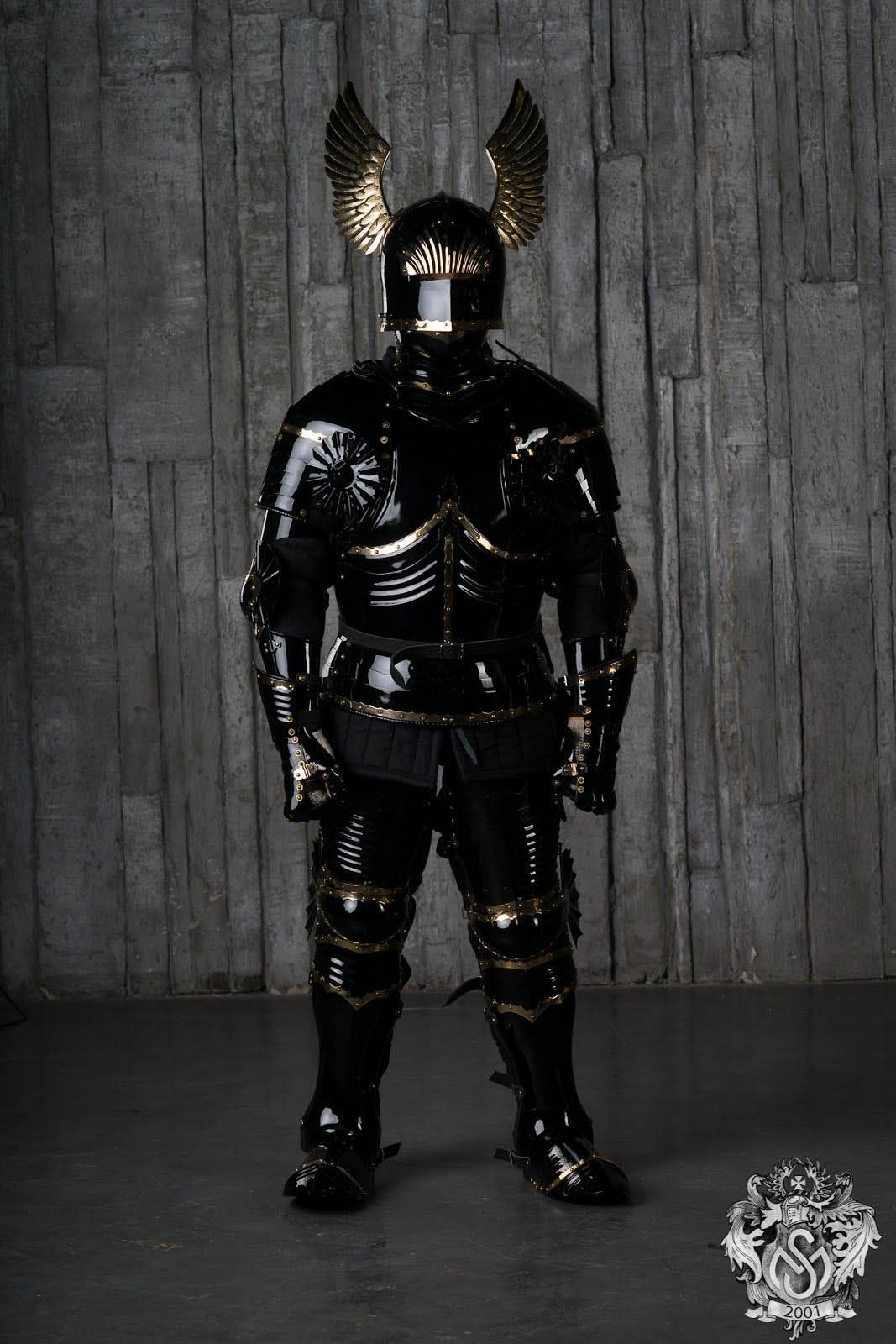